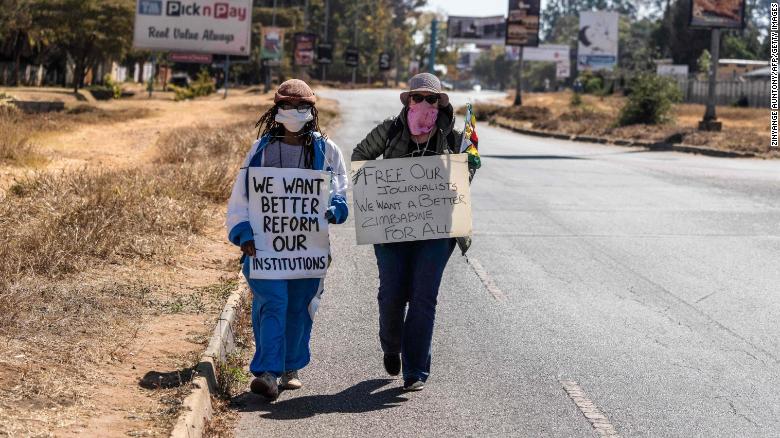 Award-winning author and filmmaker Tsitsi Dangarembga posted an image on her Twitter page calling on protesters to make a placard with the viral #ZimbabweanLivesMatter hashtag on it.
The image also added that solo protesters should take pictures with the Zimbabwe flag and placard to post online for awareness.
The move comes amid growing police brutality and opposition crackdown in the country.
Many Zimbabweans participated in the solo demos which began Thursday.
Some protesters covered their faces or submitted their photos to a trusted account to post on their behalf, out of fear of being targeted by the Zimbabwean government.
Human Rights Lawyer, Doug Coltart posted a photo for a lady who chose to hide her identity.
“Show some love for this courageous lady who sent me her Solo Demo pic and asked me to post it for her,” he wrote on Twitter. “Yes, fear is real. But she didn’t let it stop her from taking action!”
Dangarembga was arrested and later released on bail for taking part in protests on July 31 alongside opposition party spokesperson Fadzayi Mahere. More than 60 people were also arrested by the police during the demonstrations.
The protest was called by activists over corruption and economic hardship in the country.

The #ZimbabweanLivesMatter social movement has continued to gain momentum with celebrities including rappers, AKA, Ice Cube, actresses Pearl Thusi, and Thandie Newton joining in to call for an end to the human rights abuses in the Southern African country.

Former President of Botswana, Ian Khama also joined the campaign. In a Facebook post, he called on his followers to pray for Zimbabweans as “the situation is deteriorating every day”

Opposition party Movment for Democratic Change reported that 30 of its members had fled their homes due to government clampdown on the opposition.

“We have so far drawn a list of 30 cadres who are no longer living at their homes for fear of being abducted, tortured or detained,” the party said in a tweet. “Some are contemplating moving their children to safer places, while others are bogged down with repairs to damaged premises.”

Another opposition leader Jacob Ngarivhume of Transform Zimbabwe was among those who called for nationwide protests.

Ngarivhume was arrested alongside prominent journalist, Hopewell Chin’ono, for inciting Zimbabweans to “participate in public violence.”
Chin’ono was recently investigating corruption allegations relating to the procurement of Covid-19 supplies by the health ministry, according to Amnesty International.

The duo have been denied bail and transferred to the Chikurubi maximum-security prison, notorious for holding political prisoners.

According to the Zimbabwe Lawyers for Human Rights (ZLHR), both men were strip-searched and bound in leg chains before being transferred late on Friday.

ZLHR confirmed their lawyers were not formally informed of the movement and were also denied private consultation with their clients, with officers instructing that all discussion be done within earshot or in the presence of prison officials.

Officials also denied Chin’ono and Ngarivhume food as they could not eat the prison-recommended diet for health reasons, according to ZLHR

“The blatant and malicious stripping away of the two prisoners’ basic rights including the right to give instructions to lawyers of their choice in private is unconstitutional. The harsh treatment of Chin’ono and Ngarivhume undermines the presumption of innocence,” it said in a statement.

In May, three opposition members also said they were abducted and assaulted by security forces following protests calling on the government to release grants to assist those affected by the Covid-19 lockdown. The Zimbabwean government dismissed their allegations as false and put them in jail.
The trio were later released on bail on conditions that included a ban on communication about the case on any media including social media.
Zimbabwe’s President Emmerson Mnangagwa has responded to the critics by promising to “flush out bad apples” trying to divide the country as pressure mounted on the government to stop human rights violations.
In a defiant speech last week, Mnangagwa accused foreign forces of attempting to destabilize the southern African nation.

“SADC and the African Union should call out Zimbabwe’s government for its repression and rampant abuses throughout the country,” he said in a statement. “It’s important for these regional institutions to send strong signals to the Mnangagwa administration that flagrant violations of the African Charter on Human and Peoples’ Rights and other human rights treaties are unacceptable.”

South Africa President Cyril Ramaphosa who is also AU chairperson announced Thursday that a special envoy will be sent to Zimbabwe.

The envoy, consisting of former Provincial and Local Government Minister, Dr. Sydney Mufamadi, and former Deputy President, Baleka Mbete will engage the government “on possible ways in which South Africa can assist Zimbabwe.”