Zimbabwe’s civil servants to strike on Friday over salaries

Source: Zimbabwe’s civil servants to strike on Friday over salaries – The Washington Post 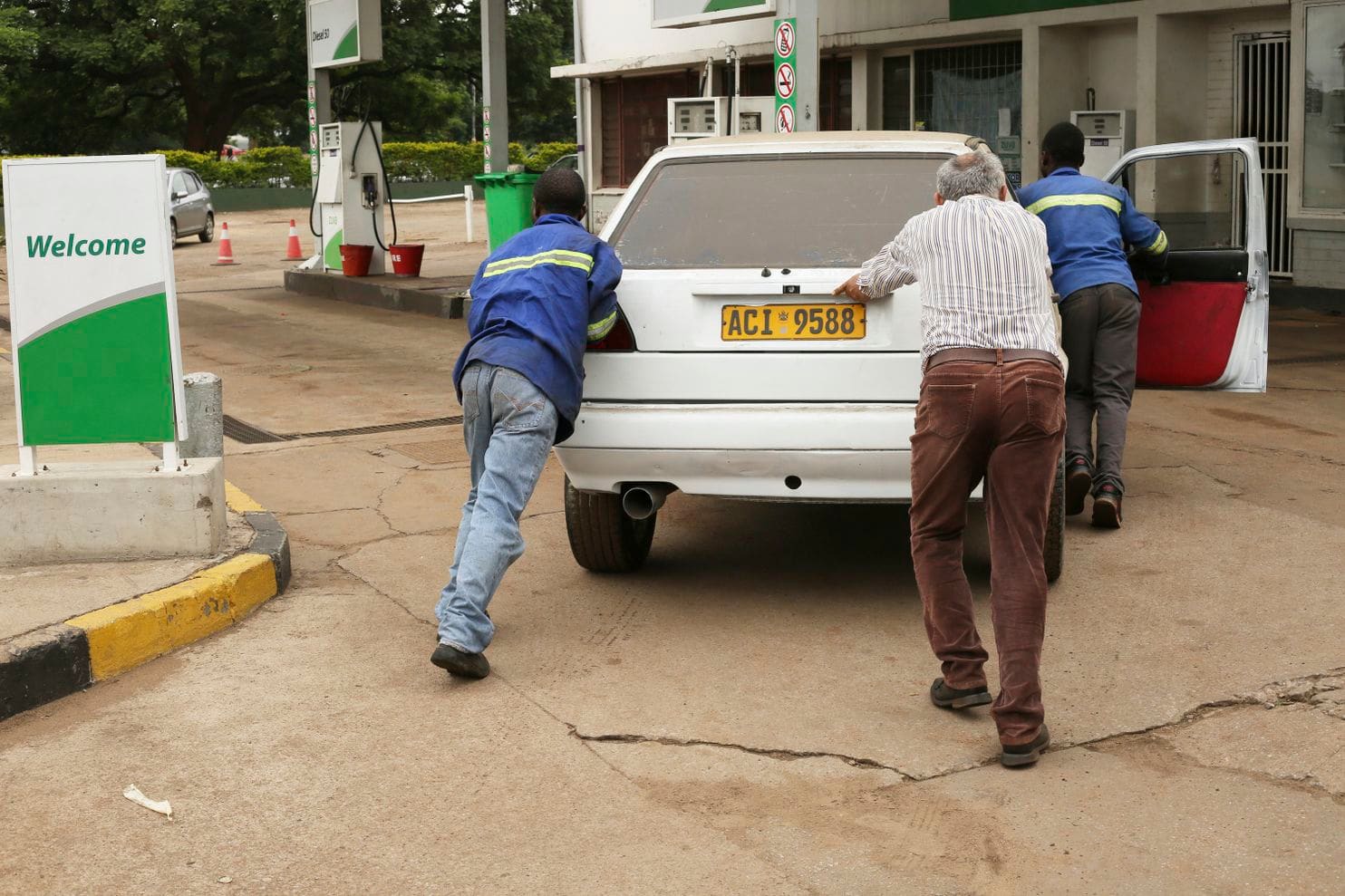 A motorist is helped to push his car into a garage after it ran out out of fuel, in the capital Harare, Wednesday, Jan, 23, 2019. The Southern African nation remained tense as President Emmerson Mnangagwa’s call for national dialogue is met with skepticism, and reports of abuses by security forces continued. (Tsvangirayi Mukwazhi/Associated Press)

HARARE, Zimbabwe — Zimbabwe faces a new wave of unrest as the group representing government workers announced on Wednesday that roughly 500,000 civil servants across the country will go on strike after salary negotiations failed.

A crackdown on last week’s protests over a sharp rise in fuel prices continued in the courts and on the streets, where witnesses and rights groups reported abuses by the military, police and ruling party youth gangs. Mnangagwa’s call for national dialogue has been met with skepticism.

Soldiers and police tortured and assaulted people in their homes in Zimbabwe’s second city, Bulawayo, overnight in “post-protest retribution,” the Zimbabwe Human Rights NGO Forum said in a statement.

A labor federation leader charged with subversion was at court along with dozens of others accused of involvement in the protests, while their lawyers accused the government of systematically denying them justice.

Japhet Moyo, secretary-general of the Zimbabwe Congress of Trade Unions, could face 20 years in prison. He is accused of inciting Zimbabweans to protest the fuel price increase by staying off the streets. Other Zimbabweans, frustrated over the long lines for fuel and other basics, demonstrated, with some looting shops in anger or desperation.

The military deployed, and doctors and rights groups have documented at least 12 people killed and more than 300 wounded. Some were shot at close range. Others were pulled from hospital beds and arrested.

They are likely “just a fraction of the actual victims,” the Zimbabwe Association of Doctors for Human Rights said Tuesday.

Lawyers say labor leader Moyo is not guilty. Pastor and activist Evan Mawarire, also accused of subversion for joining Moyo’s call for protest, had his application for bail delayed until Friday by the High Court in the capital, Harare. He has been detained for a week.

Lawyers say more than 600 people have been arrested, with most of them denied bail. Those arrested, killed and wounded include ordinary citizens, including children. Some hungry Zimbabweans were picked up after venturing out in search of bread or other basics from the few shops open during the protests.

The dozens in court on Wednesday are accused of “committing public violence.”

Lawyer Beatrice Mtetwa alleged “a coordinated, deliberate orchestrated attempt to subvert justice.” Some people were forced to stand trial without being given sufficient time to brief their lawyers, she said.

“We have had a pattern … of every magistrate in different provinces doing exactly the same thing,” said Mtetwa, a board member of Zimbabwe Lawyers for Human Rights.

Responding to the president’s call for national dialogue, main opposition leader Nelson Chamisa on Tuesday called for the “unconditional release of all prisoners of conscience and political detainees.”

In Harare’s city center and in many of its working-class and poor suburbs, armed soldiers maintained a presence and at times beat up people, according to residents, non-governmental groups and the opposition.

Zimbabwe’s government has provided buses with cheaper fares, and accompanied by armed soldiers, to ferry people to work. There were long lines for cooking gas and other basic items, and people elbowed each other for bread in shops that still had it in stock.