Inflation in Zimbabwe is sky-high — marked by ill-equipped hospitals and long lines for fuel. NPR talks with two doctors who say they don’t have the supplies to keep patients, and themselves, safe. 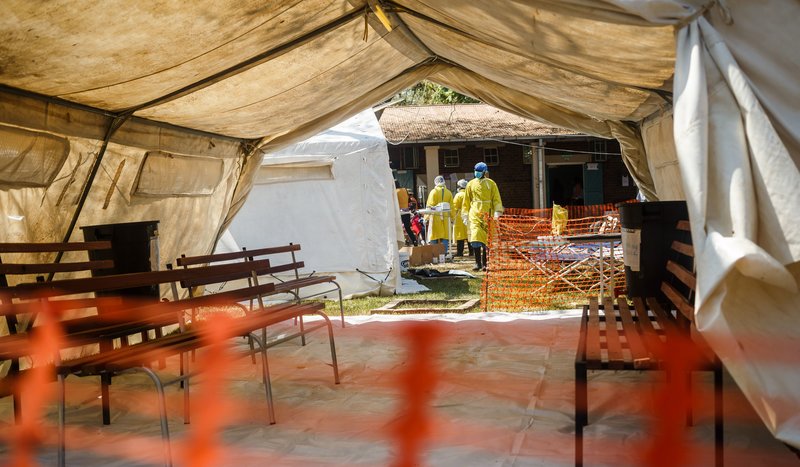 It seems like gloves, needles, painkillers and water should be standard stock in any hospital.

But they’re not in Zimbabwe.

Zimbabwe’s hopes for economic change after the November 2017 ouster of President Robert Mugabe, followed by the swearing-in of the new president, Emmerson Mnangagwa, have not been realized.

With an annual inflation rate of 290 percent, Zimbabwe’s economy continues to decline, and the tremors are felt everywhere: Long lines outside banks and fuel stations mark the urban landscape as people wait for money and gas, and health care facilities are not able to stock what they need.

Doctors have been pressing the government for change — including through strikes — demanding better salaries, needed supplies and functioning medical equipment. In public hospitals, doctors are working in arduous conditions, forcing some to operate with their bare hands, at worst, and nonsterile gloves, at best, when essential supplies run out.

Doctors are providing lists of supplies for patients to buy in advance, from face masks to anesthesia, and for the poorest patients, they are using their own money to purchase needed items. Water rationing has forced United Bulawayo Hospitals — the country’s third-largest hospital facility — to scale back on surgeries. Doctors say they are scared that they may be infected by a patient with a communicable disease — but that they have no choice but to help.

While the first strike dates back to the Mugabe era, in March 2017, the situation in public hospitals continues to worsen — and strike demands still haven’t been met under Mnangagwa. The government is obligated to purchase supplies and equipment; foreign currency is needed to import these supplies, but the government says it doesn’t have foreign currency due to the severity of the economic crisis.

After the most recent strike, which ended Jan. 12, doctors agreed to return to duty because the government promised to meet the medical professionals’ demands by Jan. 31. This date has past — and the agreement has not been fulfilled.

Dr. Solwayo Ngwenya, a government official and the clinical director of Mpilo Hospital, told NPR in reference to the situation: “There’s no story in health.”

NPR talked with Dr. Mthabisi Bhebhe, the secretary-general of the Zimbabwe Hospital Doctors Association, who works at Mpilo Hospital, and Dr. Edgar Munatsi, former president and now member of the ZHDA. He consults at Parirenyatwa Hospital in Harare, the capital.

How do you deal with the current shortages of medical supplies and medication?

Bhebhe: We are facing serious medical shortages that affect how we do our work. We are working with suboptimal machines and severely limited supplies.

Simple things such as gloves, bandages or needles are not easy to get. There are times when I’ve had to operate without surgical gloves. I use the short nonsterile gloves which we use for basic consultations.

Earlier this year, I had to attend to a woman who’d just had a miscarriage, and I had to do a pelvic examination using nonsterile gloves. [Sterile gloves are sterilized, are longer and stronger than nonsterile gloves, and have a protective chemical on them.]

The gloves are short, and I had to go right inside her. The blood went onto my arms; it was just oozing all over. I know the risk of being infected is high, but there’s nothing I can do if someone is in need of help.

Every time I have to perform a procedure without adequate equipment, I’m scared I could get something like hepatitis B. If I’m working on a patient who is infected and I have a small cut I’m unaware of, I could be infected because it’s highly contagious — but in some situations one has to make some hard decisions.

Munatsi: There are many situations when doctors put themselves at risk — not just operations but even when scrubbing up for operations or examining patients.

It’s now gotten to the stage where we have to use ordinary soap instead of Betadine surgical scrub [an antiseptic], so it means one has to wash their hands several times before and after an operation.

But there’s no certainty that the hands are clean and uninfected. In cases where we are short of supplies, patients are given a list of things to buy, like a face mask or ketamine [anesthetic gas]. These things can be very expensive, as much as $80 just for the anesthetic gas [each bottle comes with enough for four operations lasting a few hours each], so for a patient from the rural areas, it can be too much.

They can’t afford it, so in cases where we can, we contribute money to buy it for them; otherwise we can’t attend [to] them. In emergency operations, there’s no time for a patient to prepare, and we just have to improvise with the little we have.

Over the past two years, doctors have staged at least three nationwide strikes demanding better salaries and working conditions. What is the situation like for a medical civil servant in Zimbabwe?

Munatsi: The sudden introduction of the transaction tax [a 2 percent charge on all electronic transactions, implemented in October 2018] really raised the cost of living, so hundreds of junior doctors felt striking was the best way to put our message across.

During that time, in Harare, some patients were discharged early, especially those in maternity, even those with birth complications. They had to go home because there wasn’t enough staff to cope.

Because other staff like radiographers and general medical officers went on strike too, the senior doctors and private doctors who work on call attended to critical cases throughout December, but it was a struggle.

Now doctors are back at work, but we still have the same grievances — and hospitals are struggling with supplies of basic narcotics like morphine, ARVs [antiretroviral drugs] and anesthetic drugs.

Bhebhe: Working as a doctor in a government hospital is a very tough job. We are expected to put passion and duty of care over everything else, but there are times when it becomes impossible to do that.

As doctors, many of us are aggrieved about our salaries and working conditions. The recent 40-day strike action [from Dec. 1 to Jan. 12] we took wasn’t just about money; it was also a protest against the working environment in state hospitals.

They are very poorly equipped, and one of the biggest challenges we face is working long hours using bad equipment or nothing at all. Most of the theater machines like the anesthetic machines are over 30 years old, and it’s difficult to maintain them. [There’s just one] dialysis machine which filters blood in the kidneys, and it can’t meet patients’ needs at Mpilo.

With old theater machines, it’s hard to get a reading on the heart rate, blood pressure or even to detect when someone is losing too much blood. Every move a doctor makes is supposed to be guided by those monitors, but since they don’t work, every operation in a state hospital is a risky procedure.

What kind of environment would be ideal? What would be needed to end the striking?

Bhebhe: Ideally, we would want to work in a place where one is properly rewarded for their work. A place where one can practice real medicine in a fully functional hospital [receiving an appropriate wage], not a situation where the abnormal seems normal.

It would be nice to be well-versed with trends in medicine and using modern equipment, but in Zimbabwe we are practicing bush medicine where we have to compromise our standards.

At present, the country’s health system lacks the capacity to handle an outbreak; the system is in a comatose state. That’s why it’s such a challenge to contain diseases like cholera.

Munatsi: The hospital doctors association is in talks with the government because there are still outstanding issues from the last strike action. The state was supposed to have paid all outstanding allowances [for items including being on call during emergencies and transporting patients] by Jan. 31, but that date has lapsed.

They haven’t honored the collective bargaining agreement over salaries and to improve the capacity of hospitals to ensure we work in a safe environment that doesn’t put patients or doctors at risk.

We agreed in good faith, but once again, nothing has been done. Unless the economic situation improves and more is invested into the public health sector, I don’t see conditions in the workplace improving — and doctors will continue to struggle along.