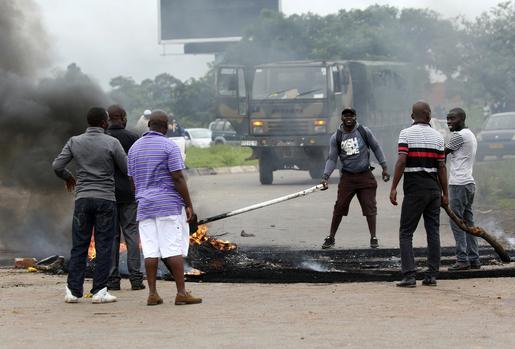 Zimbabweans yesterday went about their businesses as usual, ignoring a call for a shutdown by social movement group, Tajamuka/Sesijikile to protest against the deteriorating economic situation in the country.

It was business as usual in Harare, Bulawayo and other cities as many citizens snubed the call to stay at home by the Tajamuka leader Promise Mkwananzi.

The city centre was heavy with riot police, some wearing newly acquired combat, waiting to quash any disturbances or uprisings that had been promised by Tajamuka.

Mkwananzi had initially said the shutdown, which was supposed to begin yesterday and end on Friday, would be followed by a march to the State House on July 6 to force President Emmerson Mngangagwa to urgently attend to the economic crises facing the country.

But NewsDay learnt that Mkwananzi called for the national shutdown while he was in South Africa, rendering it ineffective.

Zimbabwe Congress of Trade Unions (ZCTU) and Amalgamated Rural Teachers’ Union of Zimbabwe distanced themselves as the driving forces of the shutdown.

In Bulawayo, Matabeleland South and North, people ignored the call to stay away and went on with their business as usual in the city with heavy police presence.

On Sunday the International Cross-Border Traders’ Association (ICTA) warned travellers and transporters to be cautious when travelling to and from Zimbabwe this week because of the threatened shutdown.

But yesterday, ICTA president Denis Juru said there was no shutdown as everything was normal.

“It is business as usual here and travellers, traders and transporters are travelling so far without disturbances,” he said.

In January, the ZCTU called for protests over Zimbabwe’s deteriorating economic situation, forcing the country to a standstill. The protests were, however, marked with violence,
resulting in the death of 17 people following military intervention.

Efforts to get a comment from Mkwananzi were fruitless. He did not respond to text messages sent to his mobile phone and calls were not going through by the time of going to print last night.