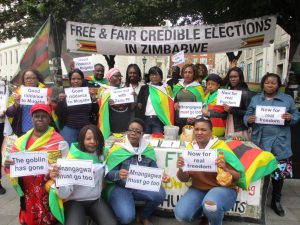 ‘The evil that men do lives after them, the good is oft interred with their bones’, observed Shakespeare. There will not be much good found in Mugabe’s bones interred in Heroes’ Acre.

It is surely right to disregard the tyrant’s petulant objections and bury him alongside other Zanu PF leaders. Perhaps one day tourists will visit Heroes’ Acre like they do the desolate field outside Budapest where statues from the Soviet era have been dumped.

You can say of most people that they had good and bad points. Not the same with Mugabe. What was not bad was evil.

Many people, including opposition leaders and British ambassadors, say he had charm. So did Hitler. What charm Mugabe had was of the reptilian kind – poisonous. And it was for his poisonous ruin of the state that he will be remembered.

Mugabe was hailed as a liberation hero but there are doubts that he ever spared a thought for anyone apart from his own family. Embittered by a decade of detention, he then waded through blood to capture the leadership of Zanu.

When he came to power in 1980 he was responsible for the Gukurahundi genocide of some 20,000 Ndebele, along with his successor President Mnangagwa. Together they launched rash foreign excursions to line their own pockets. He was a bad example to Africa, which still reveres him despite his legacy of starvation, corruption, hopelessness and fear.

First reaction from Harare to the news of his death was from dimwit minister Energy Mutodi who bizarrely described the death of a 95-year-old man as ‘untimely’. But Mutodi was correct in saying ‘This nation is what it is because of what he did’.

Mnangagwa has declared seven days of mourning but you can be sure that he will not be observing it himself.

FOR THE RECORD: 32 signed the register.