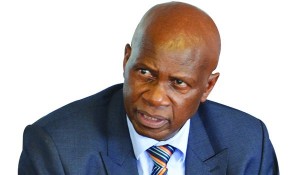 FINANCE and Economic Development Minister, Patrick Chinamasa, is expected to remove the five percent tax levy on Point of Sale (POS) and electronic transactions by end of the third quarter, it has emerged.

The move – aimed at promoting the use of cash-lite payments in the wake of acute cash shortages – was initially announced last month in the National Assembly, with Treasury sources telling The Financial Gazette earlier this week that consultations for the process had already started.

“The minister wants this done as soon as possible, so work around the dynamics is already underway. If all goes well, the tax will be scrapped by the end of the third quarter,” the source said.
While efforts to get a comment on the developments from Chinamasa were futile, Reserve Bank of Zimbabwe (RBZ) governor John Mangudya confirmed that Treasury was working on the issue.
“We expect Minister Chinamasa to finalise the process to scrap the five percent tax in the next few months,” Mangudya said.

With RBZ data indicating that electronic transactions surged 36 percent to $7,5 billion in the first half of the year, market watchers contend removal of the five percent levy would be a welcome development to the transacting public.

Last month Chinamasa said the move was in line with a government position to review fees downwards and promote electronic transactions while also relieving demand on scarce cash reserves.
“And we are proceeding to remove the five percent tax per transaction on POS and electronic payments. It is our considered view that this initiative will further bring the requisite financial resources and capacity for institutions to import more POS machines,” the treasury chief said.

To manage the transition from a cash society to a cash-lite one, Chinamasa also removed import duty on POS imports to assist the country boost its weak POS infrastructure in the 2017 National Budget.
Central bank data indicates that plastic and electronic money now accounts for over 80 of the country’s retail transactions.

Since the country’s cash shortages began, cash-obsessed locals have been forced to migrate to alternative payment methods with the RBZ aggressively lobbying for migration to cash-lite transactions.
Data from payments services firm, ZimSwitch, indicates that the firm recorded over 1 600 percent surge in transaction volumes in the first half, buoyed by transactions through POS terminals.

However, despite increased use of the terminals, Zimbabweans are reeling from high charges associated with the transactions which attract levies of between $0,10 to a maximum of $2,10.
Vice President Emmerson Mnangagwa recently called on local financial institutions to review electronic transaction fees downwards; pointing out this will help reduce the demand for cash in the local market.