Cyclone Idai: Zimbabweans rally to help each other

Source: Cyclone Idai: Zimbabweans rally to help each other | News24 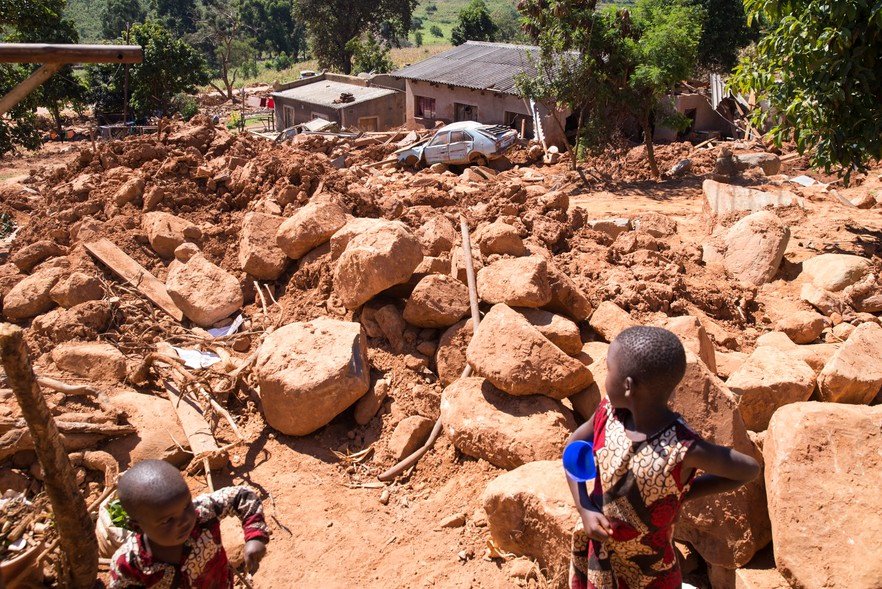 With little faith in their government, Zimbabweans took the rescue effort into their own hands after Cyclone Idai hit the Chimanimani region, GroundUp reports.

The first rains in the aftermath of Cyclone Idai fell on Chimanimani on April 12, once again isolating the town nearly a month after floods and mudslides left at least 169 dead and 328 missing, according to official estimates.

The rains turned the hastily constructed temporary bridge less than a kilometre from the town centre, into a mudslide that even powerful 4x4s struggled to negotiate.

The contractors called in by government to fill in the numerous washaways on the road to Chimanimani had failed to put gravel on the clay. Vehicles had slipped into the roadside ditches and a truck stood abandoned in the middle of the road.

An army truck stood axle-deep in the adjacent cornfield after trying a different route. It was 22:30 on a pitch black Friday night and it was every person for themselves. No government, police or army official was to be seen.

On Saturday morning a tractor belonging to the Zimbabwean Electricity Supply Authority (Zesa) was helping to pull vehicles through, but no one was directing operations. The tractor driver just had to do his best as impatient drivers jammed up the causeway.

It was only on Sunday, by which time the weather was clearing, that the ministry of transport organised a private contractor to grade the 200m of road to enable traffic to move, but the dump trucks that went to fetch gravel returned empty as they could not find traction on the saturated clay road leading to the quarry. 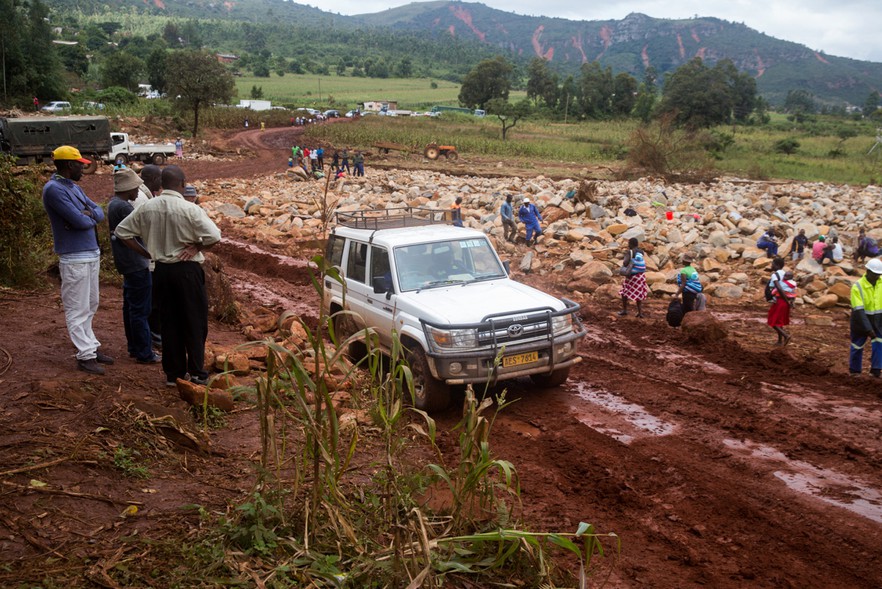 The first rains after Cyclone Idai made the temporary causeway at the last bridge into Chimanimani impassable for fuel and aid trucks. Watching 4x4s sliding up the clay slope became a spectacle for residents. Photo: Ashraf Hendricks

The lack of forethought to lay down gravel during the four weeks of clear weather after the cyclone meant trucks could not move out of Chimanimani to take aid to surrounding villages in the rural area.

Steven Beans, a driver for Masara Logistics which is helping to move aid from Silverstream – a relief collection station about 40km away – said his 10-ton truck had been stuck in Chimanimani for three days as no fuel could be brought in. The temporary road to Copa, where 63 houses completely disappeared beneath mud and rocks, resulting in over 200 people being washed away, according to residents, was equally impassable to relief vehicles, said Beans.

“I don’t know who will be fixing it, the army and the Civil Protection Unit are not fixing it,” said Beans.

But the fact that official response was slow at best, and no officials were on hand to direct vehicles or provide information or assistance, was taken for granted. Citizens are accustomed to having to fend for themselves.

“When you are hanging off a cliff at the end of a rope, there isn’t anyone to call,” said Doug van der Ruit, a Chimanimani timber farmer who was one of a disparate group of people who led the first cyclone relief efforts. 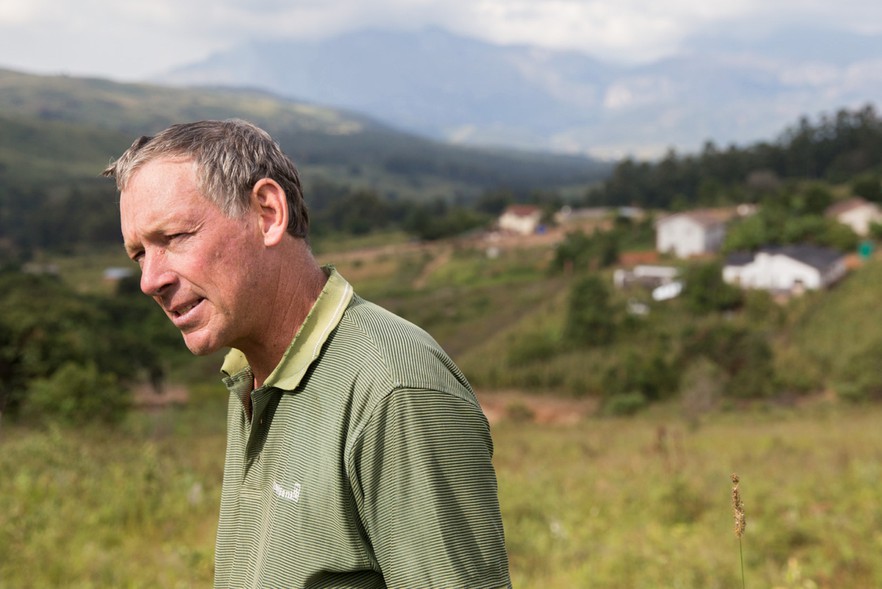 With low expectations and little trust in government, Zimbabweans took matters into their own hands after Cyclone Idai clawed the mountainous Chimanimani area with 190km/h winds and 1 000mm of rain, bringing floods and mudslides that cut swathes through settlements and washed away bridges, cut out electricity and cellular communication.

Those who survived looked upon an altered landscape. Rocks and mud covered the ground where houses used to stand, and bodies and parts of bodies were scattered amid the debris downriver. Not only was there no electricity and no cellular signal, there was initially no way in and no way out.

Van der Ruit was one of the first people to organise relief efforts in the first week after the cyclone struck on Friday March 15.

Working with his daughter’s father-in-law, Bob Henson, who owns a small helicopter, van der Ruit and his wife, Tempe, threw themselves into helping devastated communities and saving lives.

As soon as the weather cleared enough for flying, Henson arrived. It was the early morning of Tuesday March 19, the fourth day after the cyclone hit. An air force helicopter had arrived the night before, having struggled to get in from Harare. The air force was supposed to conduct casualty evacuations (casavacs), but never took anyone out, says van der Ruit.

It was up to Henson, with Van der Ruit organising the logistics, to take the most desperate patients out in the small three-person chopper.

In the meantime Brian James, a former MDC mayor of Mutare, and his wife Lynne, had been scouting the roads between Mutare and Chimanimani since Sunday March 17.

The most direct route from Mutare – the largest town in the eastern highlands and which escaped damage – to Chimanimani was blocked just past Wengezi where the bridge across the Umvumvumvu River had been washed away.

They explored a longer route, getting as far as Skyline, a windswept ridge from which the road winds about 10km down to Chimanimani. But numerous streams that normally gurgled placidly down kloofs had been turned into raging rivers carrying trees and boulders that had washed sections of the road away.

They decided the Mashonjowa Primary School at Wengezi was the best place to set up a relief station from which the tons of aid being organised by Jacqueline Anderson from Miracle Missions in Harare could be airlifted.

Besides Bob Henson’s little bubble chopper, Leading Edge Aviation from Cape Town were on the way with a Huey and a Blackhawk helicopter, while the Mutare 4×4 club and bikers were using local knowledge to scout out back routes to disaster areas.

Tons of aid had been donated to Miracle Missions by Zimbabweans. Ed Mort of Leading Edge Aviation had made his fleet of fixed wing aircraft available at Mutare airport for casavacs to Harare. The citizens were set as the army was getting ready to go.

On Wednesday March 20 the citizens leading the first response were invited to a meeting with the army brigadier general in Mutare.

Former Mutare mayor and provincial government treasurer Brian James said it was evident that government, including the army, ” just didn’t have the resources and realised it, and so for that reason was amenable for civilian groupings to get on with it”.

James said he, Van der Ruit and Henson agreed to meet at Perrim’s airstrip in Mutare to coordinate.

“Lynne and I arrived at Perrims and it was swarming with army, Zanu-PF, two helicopters on the tarmac. The President was in town and they were waiting for him to come back. Ed Mort’s planes were also parked at Perrims.

“Then brigadier general Francis Chikanya said we must meet at the government complex as soon as the president left.

“There were a lot of aid agencies there as well, such as the ICRC (Red Cross), Plan International and others.” 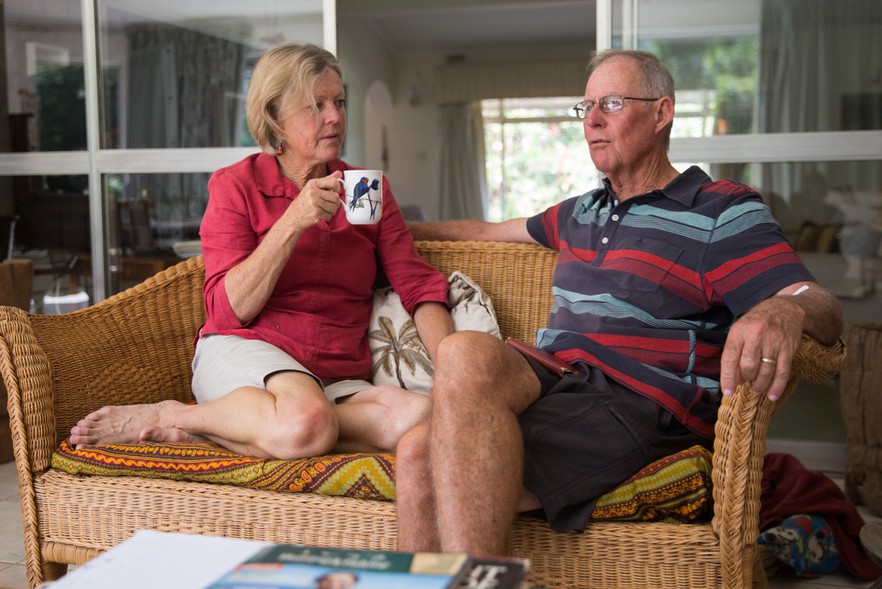 Mutare residents Lynne and Brian James were pivotal in organising the first forward depot at Mashonjowa primary school in Wengezi for aid to be airlifted to settlements in the Chimanimani area devastated by Cyclone Idai. Photo: Ashraf Hendricks

James said Chikanya kept saying this was now an army operation, but realised the civilian organisation was so well advanced that he was amenable to them progressing.

“We made suggestions regarding who should get involved in transport and it was decided two forward depots were necessary, one at Wengezi and one at Chipinge. The Chipinge depot was left to government operations to run. Then we got going.”

By 15:00 they were back at Wengezi, just beaten by the Red Cross, and then the army arrived and set up camp.

The Huey and Blackhawk from Leading Edge arrived the next day, Thursday, and the first food, blankets and medicines started going out by air. That day the first drops were made to Ngangu, the Chimanimani high density area where houses and families were hit by a mudslide.

The priority was to fix the roads to the affected areas, said James, adding that the government needed to be credited for pulling various private road contractors off their jobs and redirecting them to Chimanimani.

But the 4×4 club moved the first 42 tons of food relief on their bakkies via back routes. They had already been at work since the Monday, said James, with Brett Henderson winching civilian vehicles, including a Datsun loaded with a coffin, out of the mud.

“The government was poorly prepared, both in organisation and assets. But credit to them, they realised where their assets were and made them available.”

Jacqueline Anderson from Miracle Missions, which loaded 51 30-ton trucks with relief aid donated by Zimbabweans, five of which have gone on to Mozambique, said citizens reacted to the disaster very quickly. 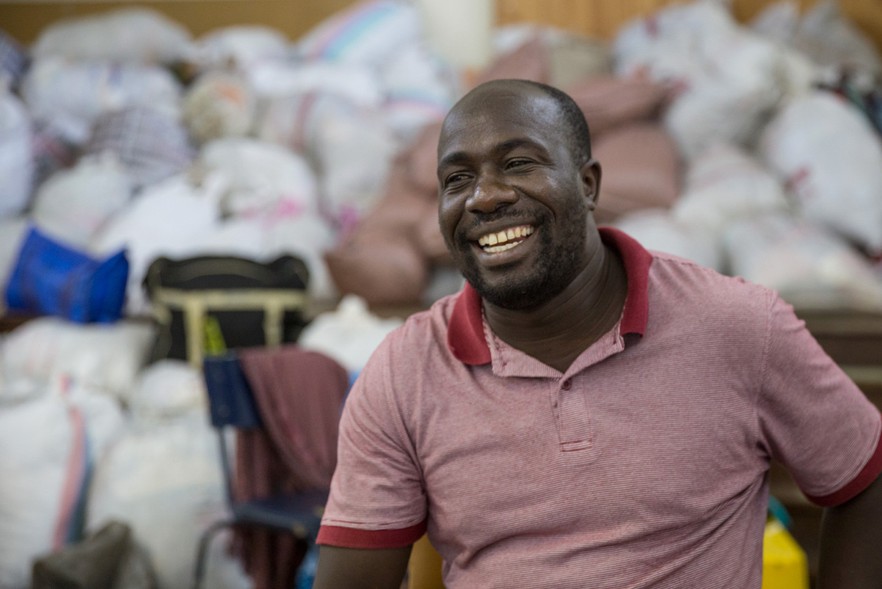 Mutare Presbyterian minister Everisto Musedza said Zimbabweans from all faiths and walks of life offered their services and gave what they could. Photo: Ashraf Hendricks.

Anderson said Miracle Missions put a call out on the Saturday, the day after the cyclone hit, and by Monday the first truck had been loaded. The Presbyterian church in Mutare, where Everisto Musedza is minister, became the collection point.

By Thursday the first airlift went out at Wengezi, says Anderson. Fuel for the choppers was sponsored partly by Econet and partly by donors who contributed money to Miracle Missions.

Everything was sent to Mutare Presbyterian where there were 1 000 people putting the goods together in family packs containing food, candles and soap, wrapping them in blankets and sewing it all into sacks.

Musedza said the magnitude of the response from Zimbabweans was overwhelming.

“We saw all walks of life contribute, across all faiths. From the elite to the poorest, people arrived to offer their services, saying, ‘Here I am, where do you want me?'”

“This has made us all rally together across all religions and faiths. My hope is that we can build on this unity.”

Calls to Chikanya were not answered.