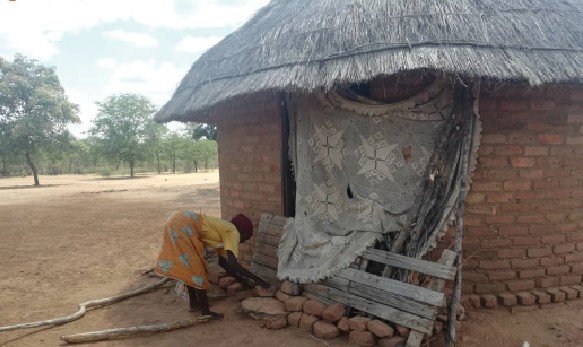 Gogo Chiranganei Chimusoro in front of her hut

News in depth BY MOSES MUGUGUNYEKI

Frail old Gogo Chiranganei Chimusoro of Chimusoro village in Hoya ward in Muzarabani, Mashonaland Central province, appears to be in agony as she opens the door of her small hut whose doorway is covered by a torn crocheted blanket.

She says she has been staying with her three grandchildren in the hut without a door for almost three years.

She has lived in poverty for the better part of her life, especially after the death of her husband and children.

“I have lived much of my life without my husband and all my children are dead,” Gogo Chimusoro said.

She is among thousands of families in Muzarabani who face serious food shortages, which, if not urgently addressed, could lead to starvation as some people are already surviving on one meal a day.

Muzarabani — one of the marginalised communities in Zimbabwe — is already facing a food crisis, villagers said.

A 2018 World Poverty Clock report says 5 679 092 people in Zimbabwe are living in extreme poverty, throwing into doubt the country’s capacity to meet the United Nations’ Sustainable Development Goal to end extreme poverty by 2030.

“If it wasn’t for the assistance that we are getting from the Red Cross, we could have died of hunger,” Gogo Chimusoro said.

“We could hardly have a meal in the afternoon and most of the time we went to bed without eating anything.
Sometimes we would have okra without any starch.”

The project, which started in December last year and ends on April 30 this year, is supported by the World Food Programme (WFP).

“Most families hardly have any food to eat. Some are having just one meal a day while others have nothing to eat at all,” said Hoya councillor Proud Pfotso.

“We have many families who have nothing to eat. Families headed by the elderly, the sick or the disabled are in a desperate situation.

“It is fortunate we no longer have child-headed families in the ward, but quite a number of people are facing starvation.”

Pfotso said lives would be lost if relief food was not delivered to the area immediately.

“Government should immediately bring food to this area otherwise people will die,” he said.

“The Red Cross played their part for the past four months, but we had poor harvests so they should consider extending their programme.”

According to a ZimVac January 2019 analysis, nearly 7,5 million people in rural and urban areas in Zimbabwe are food-insecure.

WFP says this year nearly 5,3 million people face food insecurity at the peak of the lean season, as poor rains and erratic weather patterns have had a negative impact on crop harvests.

Muzarabani, being one of the driest districts in the country, is among the worst affected.

Enia Mazurofa (78) of Mandava village told a distressing story of starvation, saying she was struggling to feed her five orphaned grandchildren.

“I am looking after five grandchildren. Sometimes we forego breakfast and eat one meal in the afternoon and nothing in the evening,” Mazurofa said.

“Only the three of us are getting assistance from the Red Cross because three of my grandchildren were not registered.

“I am happy that I am getting money, cooking oil and porridge, which has been helping us.

“We use the money to buy food items and soap, but they don’t last long, given the size of my family.”

Mazurofa said the situation was out of hand, forcing her to pull her granddaughter out of school because she was failing to raise fees.

“She did Grade 7, but I did not have money for her secondary education,” she said.

Liveson “Chibwe” Tembo from Chimukangara said the situation in the village was grim, especially for vulnerable people like him.

“With my condition I cannot go onto the fields, but my wife does. However, the crop in our small plot failed because the rains were scarce,” he said.

“We are happy to get support in cash and cooking oil, which has helped us, but we are told this is the last month, so I don’t know what awaits us because our fields failed us.”

Seventy-four-year-old Mavis Mushore said she was old and frail, which made it difficult to feed her three grandchildren.

“I am now old and sick. I no longer have the energy to work the fields, so I rely on a small garden where I grow a few vegetables,|” she said.

“I do piece jobs to sustain the orphaned grandchildren I am looking after.”

An average family in the area comprises nine people and food runs out fast.

“A bucket of maize can feed the family for five days and lately the price of maize has gone up. I am staying with my two daughters, daughter-in-law and son, as well as their children,” a villager said. “There are nine of us.”

He said most families would be forced to barter their livestock for a song for maize as drought beckons.

“Very soon people will give away their livestock, especially cattle, in exchange for maize,” said the villager.

The lower part of Muzarabani did not receive meaningful rains.

“The rains were erratic since the onset of the wet season. Crops have wilted and rivers are still dry. This is one of the worst droughts ever and hunger is looming,” said Pfotso.

A villager, who spoke on condition of anonymity, said government had done nothing to address the situation and a few villagers were surviving on the benevolence of non-governmental organisations.

However, Jairos Bonnie, who was standing in for the Muzarabani district administrator, said while the situation was dire, efforts were being made to alleviate the food shortages.

“Government is making plans to reintroduce food relief programmes because in this part of Muzarabani people are in need of food assistance,” he said.

“I think what is needed now is for government to speed up the programmes to fill the gap that is being left by the Red Cross and other organisations that have been working in the area.”

Pfotso said many families would withdraw their children from school next term because of hunger.

“There is need to urgently address the situation because families will fail to send children to school,” he said.
“We also appeal for the reintroduction of supplementary feeding programmes in schools.”

A survey carried out by this publication in several wards of Muzarabani last week showed that most crops in the area were now a complete write-off and major rivers, the main sources of water, have since dried up.

Hoya River, one of the major water sources in the area, is dry and villagers said this signalled a severe drought.

“The remaining livestock will die because there is no drinking water. Normally, Hoya River would by this time of the year be flooded,” Pfotso said.

ZRCS provincial manager for Mashonaland Central Lucky Goteka said the Lean Season Assistance programme was meant to ease the burden for families ahead of harvest time.

“The overall project goal is to provide immediate food assistance and access as well as extending support towards sustained nutritional access for the most vulnerable households,” Goteka said.

“The support was primarily targeting food-insecure households over a four-month period beginning January this year in a bid to relieve humanitarian suffering and loss of livelihoods arising from the food shortages.

“The selection process for the beneficiaries was primarily participatory with the communities coming up with food insecurity indicators, which they would then use to rank all the households in each of the villages across the seven project wards.”

“Our coverage is limited due to resources and there are about 12 more wards that are in lower Muzarabani that are in dire need of assistance,” Goteka said.

He said given the situation in the fields, the need for support was glaring.

“It is unfortunate that this project is ending this month, but there is need for support in this area considering that the crops did not do well,” he said.

Goteka said even the small grains failed, which points to a severe drought.

The Lean Season Assistance programme is implementing complementary activities that the Red Cross is undertaking in the district to boost food security.

These activities include fruit tree propagation trainings, distribution of fruit trees to Lean Season Assistance beneficiaries, promotion on the use of energy, saving stoves and water, saving gardens known as keyhole gardens.

In Zimbabwe, WFP is supporting the government to address the root causes of vulnerability through activities that strengthen safety nets and build resilience, while also providing life-saving humanitarian assistance to the most vulnerable people, including refugees, during severe seasonal shocks.

This is being done to help Zimbabwe achieve SDG 2 on ending hunger, and SDG 17 on global partnerships.

Muzarabani is a low-lying area in the Zambezi Basin, which makes it flood-prone. Here resides one of the most marginalised communities in the country.

Zimbabwe could be experiencing its worst drought since the 1991-1992 dry spell that led to the death of more than one million cattle.