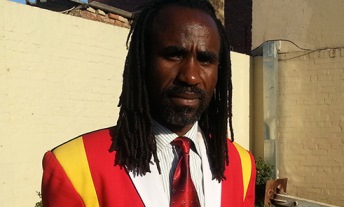 HARARE – Opposition MDC MP for Mutasa Central Trevor Saruwaka has pulled
the rag from under politicians who flush money to entice voters by
engaging experts to clarify roles of elected officials in the country’s
parliamentary democracy.

Saruwaka held the first workshop at Watsomba Business Centre where he
engaged Southern Africa Parliamentary Support Trust (SAPST) to clarify the
mandate of parliamentarians, councillors and traditional leaders as well
as the structure of government after an electoral process in which some
politicians made stunning electoral promises and poured thousands of
dollars in pursuit of the vote.

“The reason we approached SAPST to clarify issues around elected officials
was because of the behaviour of prospective candidates in the just-ended
parliamentary elections.

“Some went all out in trying to use resources to be elected into positions
which do not require people who occupy them to commit their personal
resources to discharge their mandate,” he said.

He also said he was also pushed to have the workshop because of some of
the expectations people have of him.

“This is my third term and I was concerned that some people do not know my
duties so I wanted someone else to explain to them if I would have failed
as an elected official by not buying beer or funding funerals,” Saruwaka
said.

SAPST legal officer Vivian Mashavave who delivered the lecture confirmed
that many good parliamentarians had failed to retain their posts despite
performing their duties expertly in the last Parliament because they were
not “buying beer”.

“Our biggest challenge as an organisation is that people have wrong
expectations from MPs, they think they are there to buy beer, pay fees and
finance funerals or repair roads where we have whole ministries and
government departments to handle some of the issues.

“…if we clarify the role of government in development and the
responsibilities of elected officials we would remove the risk of people
who lie to the electorate to secure positions,” Mashavave said.

“The reason we wanted the government departments like the local authority,
local government, Zinwa and others to explain their roles to people is for
them to direct some of their concerns to specific government offices for
redress,” said Saruwaka who has been a darling of the local community for
over a decade despite not having any substantial resource base.

Saruwaka is one of very few opposition politicians who managed to win a
predominantly rural constituency.