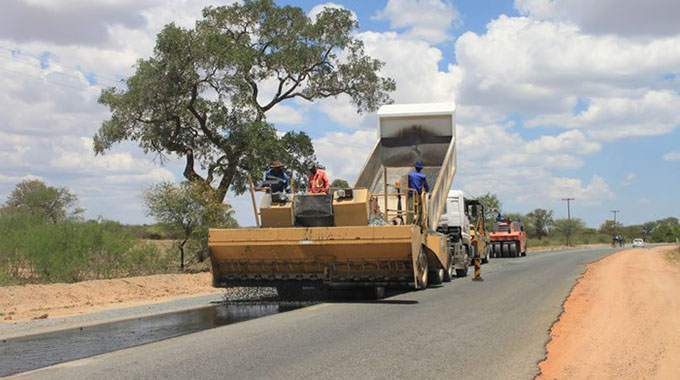 Lawson Mabhena Assistant News Editor
The new political dispensation led by President Mnangagwa’s appetite for action and less talk, has seen road projects that have been in the pipeline for over 30 years finally taking off.

During a tour of Treasury-funded road projects in Mashonaland West, Midlands, Bulawayo and Matabeleland South provinces last week, provincial road engineers said they had received the largest funding “since the turn of the century” and contractors were now overwhelmed by work.

Government has been rehabilitating roads and bridges destroyed by Cyclone Dineo in 2017, through the Emergency Road Fund while new and old projects are being fast-tracked under the auspices of the Department of Roads.

As a result of Governments commitment to budgetary allocations, major works including the reclamation of the famous Gokwe gully are now complete. Gokwe Town, including the district administrator’s office, the new court building, police station and civil servants’ residence were on the brink of collapse due to a gully which was eating its way towards the town centre.

“We have re-established trafficability on all State roads and we are set to complete Kwekwe-Nkayi Road this year. Kwekwe-Nkayi is part of the Kwekwe-Lupane Highway.

“We have also began works on the Mberengwa-West Nicholson Road and the Gokwe-Siabuwa Road rehabilitation,” Eng Kamutema said.

“This is the biggest funding since the turn of the century for the province.”

Mashonaland West provincial roads engineer Finale Mapurisa, who is also the project manager for the Harare-Gweru Road dualisation project, said the 9km stretch before the Norton tollgate was the “fastest” road construction project in the history of the country.

“The roads designs are in place for the project up to Selous Roundabout. The project if wholly funded by Treasury. A survey team is on the ground and by end of year we will have designs up to Chegutu. This is a higher standard road which is very durable with concrete surfacing,” he said.

Eng Mapurisa said the Department of Roads was working with local companies after receiving $8 million from Government, while works on 10km project after the Norton tollgate had also began. The project currently employs 120 casual workers of which 55 are women.

He said the 60km Gwanda-Maphisa road had received $5 million while Maphisa-Mpoengs had received $7 million. Old Gwanda Road has also been re-gravelled for 50km up to Maphisa Mission.

“In terms of funding, we have seen a big improvement since 2016 backwards,” Eng Mapfurira said.

In Bulawayo, major works are being done through funding from the Zimbabwe National Road Administration and self-financing by Bulawayo City Council.

“zinara has availed $600 000 for the main access road in Garikai/Hlalani kuhle. There are 15 000 properties in the area and that is about three times the size of Gwanda Town,” city engineer Simela Dube said.

Mayor Councillor Martin Moyo said: “We appreciate the support that we have been getting from zinara, road construction is not possible without support.”