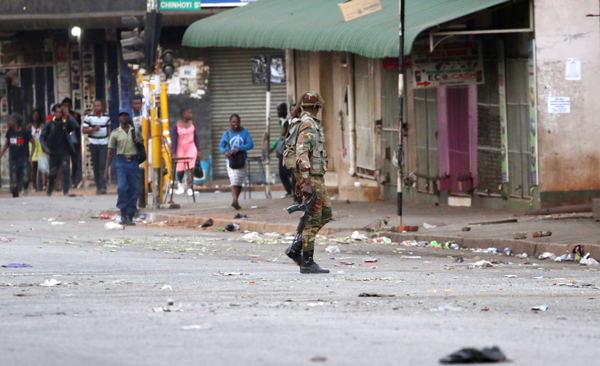 Fifty-two-year-old Wilbert Verenga considers himself lucky to be alive after he was abducted by gunmen from his home who beat him up and left him for dead.

Verenga said at one point his attackers hit him with the butt of a gun before they took him from Mpopoma to a bushy area, between Richmond and Entumbane suburbs.

He was forced to lie on the ground before he was bludgeoned with logs.

Verenga’s crime was that he had refused to disclose the whereabouts of his son, Charles, who is the MDC treasurer for Mpopoma.

His other son, 16-year-old Tadiwanashe, who became his saviour, was not spared the ruthless beatings.

Verenga said the ordeal started on August 18, a day before the much-publicised MDC protests in Bulawayo, which were thwarted by the police.

He said armed men stormed his Mpopoma home in the dead of the night looking for Charles.

“On Sunday, some armed and masked men came here at night and knocked on the door. They said they were looking for Charles, my first-born son,” Verenga said.

“My mother told them that he was not around as he no longer stayed at the house. They insisted they wanted to see him, but my mother refused to open the door for them.”

“It was around 9:30pm when the same gang of seven men armed with AK rifles knocked on the front door,” Verenga said.

“My son (Tadiwanashe) told them to knock on the back door. When they were asked who they were, they said they were police officers.

“They kicked open the door and tried to get into our bedroom, but my wife told them that she was still dressing. They barked orders that she should come out.”

Verenga, a former soldier, said when they got in, he noticed that one of them was holding an AK rifle with a folded butt.

“They had parked a commuter omnibus outside. They again asked for Charles, saying they wanted to know why the were organising demonstrations,” he said.

“I told them that we did not know since he no longer stayed at the house. They then forced me and Tadiwanashe into the kombi before they drove us to a bush.”

The gang took away their phones and locked all doors at the house.

Verenga, who still struggles to sit or walk, said once they arrived at the secluded spot, the beatings began.

“They hit me with the butt of the gun on the head, injuring me in the process,” he said.

“They forced me to lie down in the bush and started beating me with logs threatening to shoot me if I did not disclose where my son was.

“They also assaulted Tadiwanashe. They beat me until I almost passed out.”

Young Tadiwanashe eventually disclosed Charles’ whereabouts. He said he did that to save his father’s life.

“They covered my face and that of my father before taking us to the bush. When they took me, I believed they thought I was Charles and when they assaulted me, that is when I told
them that my brother no longer stays with us and I was not aware of his whereabouts,” Tadiwanashe said.

“When I heard them threatening to kill my father I then told them the place where my brother might be to save dad.

“They then left us, but my father was seriously injured. What I realised is that they were using a kombi and a Nissan X-Trail.”

He said they could not return home that night because his father was seriously injured and they slept under a bridge.

In the morning Tadiwanashe went to Entumbane to organise transport to ferry his father to hospital and was advised by one of the residents to report to the police.

Police organised an ambulance that took him to Mpilo Central Hospital where he was admitted for a day.

A request for medical assistance prepared by the police’s Law and Order section at Western Commonage (CR/other Ref:10,08,19) detailed the injuries suffered by Verenga and his son.

Charles said he was now living in fear because the men who abducted his father and brother were after him.

“I do not know why they were looking for me and who they are as I have never committed any crime or mobilised people for demonstrations,” he said,

“I wonder who I am to be hunted by gun-toting men like a criminal or an insurgent. Do I have any influence in Bulawayo or in politics in the country? I do not see myself as dangerous.

“I am no longer safe anywhere here. If those people were real police officers, I would have handed myself over so I get to know why they are looking for me.”

“I have heard about the minister’s remarks and it pains me a lot,” he said.

“How much could someone have given me at my age to lie that I was abducted?

“What I can only say is that God must visit and judge him. At my age, I do not think I can still fake injuries. These injuries you see, are they fake?”

Several civil society and opposition activists have allegedly been abducted and tortured in recent weeks after the MDC started mobilising for demonstratoons against President Emmerson Mnangagwa’s government.