Rudland’s empire in Zimbabwe is known as Pioneer Corporation Africa (PCA). Mavambo, the company raided in 2006, was a transport company and a subsidiary of PCA. 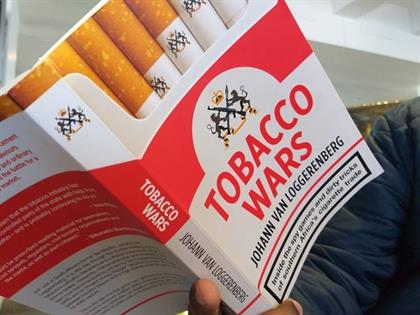 One of the pioneers of ‘cheapies’, a firm that has probably been in the game the longest, is the Gold Leaf Tobacco Corporation, known by its acronym GLTC or sometimes simply as Gold Leaf. Its brands have been competing with the multinationals since the early 2000s, the most popular being Sahawi and Pacific.

The brains behind Gold Leaf are the Zimbabweans Yakub Mahomed and Simon Rudland. They first caught public attention in 2006 when a local company, Mavambo, was raided by the crime-fighting unit the Scorpions in March that year. The Scorpions had obtained court warrants of arrest for Mahomed, Rudland and Ebrahim Adamjee, a South African.

According to an affidavit, Mahomed allegedly operated two related cigarette manufacturing plants, Gold Leaf and Sahawi, which suppos­edly supplied cigarettes on which no VAT or excise duty was paid. Adamjee allegedly ‘controlled the cash generated from the illegal cigarette sales’. Some of the cash was reportedly laundered through Mavambo and other accounts controlled by Rudland, who was also allegedly involved in smuggling Sahawi cigarettes. The investigation came to naught when the warrants were challenged in the Supreme Court of Appeal. Ultimately the case was formally withdrawn.

I recall a day when the Scorpions came to SARS, requesting us to ‘act as complainant’ soon after the raid and while the legal chal­lenge was ongoing. I will leave this here, since I am legally unable to elaborate on the matter, except to say that it is highly improper for the state to first act against people using search warrants, arrest and charge them, and then afterwards look around for ‘complainants’ to mount a criminal case.

Rudland’s empire in Zimbabwe is known as Pioneer Corporation Africa (PCA). Mavambo, the company raided in 2006, was a transport company and a subsidiary of PCA. As you will have realised by now, no tobacco manufacturer, regardless of size or brand, can claim not to have some skeletons in the cupboard. Gold Leaf is no different. In July 2013, court papers revealed Rudland’s relationship with another ‘cheapie’ pioneer, John Bredenkamp. At the time, there was a dispute between them that was playing out in the Zimbabwean courts con­cerning an amount of about $4.2 million. One insider was quoted as saying, ‘You would know that Rudland had a business relationship with the applicant, who is Sahawi International Limited, and that interest goes beyond a trading one. In this regard, I also understand that [Yakub] Mahomed is merely a representative of him … Further, you will know from court proceedings that this clever chap [PCA] would run and receive cash proceeds from Sahawi’s local operations and the dispute allegedly started after a supposed cigarette manufac­turing joint venture failed to materialise.

In 2016, Gold Leaf Tobacco made news again, when it appealed to the Supreme Court in Zimbabwe against an earlier High Court order that stopped them from packaging and selling cigarettes bearing the brand name RG in Zimbabwe. This followed lengthy litigation with the company Tonbridge Assets Limited and Cut Rag Processors, who bold the RG trademark. The High Court ruled that the use of the name caused prejudice to the Remington Gold brand of which the Zimbabwean company Savanna Tobacco was the licensed manu­facturer. Gold Leaf Tobacco Zimbabwe then introduced the brand Rudland & George to Zimbabwean smokers in 2017 while awaiting the outcome of their appeal. The RG brand was, however, still being sold in South Africa.

In South Africa, from 2002 onwards, while the battles continued between the big boys’ club and the pioneers of the ‘cheapies’ like Highway Hennie’s Apollo, Ayabatwa’s Mastermind and John Bredenkamp’s Masters International, Gold Leaf steadily continued manufacturing and selling its own brands, slowly but surely growing its market and eating into the share held by the established firms. Despite the few run-ins Gold Leaf had with the law over the years, and unlike the fortunes of Mastermind and Masters International, which eventually collapsed, the firm managed to stay afloat. Indeed, by 2018 it had probably developed into the largest of the independent tobacco traders in South Africa.

Another of the “new kids on the block” who emerged in the 2000s was Benson Craig, a manufacturer based in Botswana. As seems to be the case with many of these smaller players, Benson Craig had its own notorious character. Craig Michael Williamson is a former South African police officer who was exposed as an apartheid spy. Later, it was revealed that Williamson was the mastermind behind the as­sassination of the anti-apartheid activist Ruth First, the wife of the South African Communist Party leader, Joe Slovo. On 18 August 1982 she was killed by a letter-bomb in Maputo, Mozambique. In 1984, Williamson sent a letter-bomb which killed another anti-apartheid operative, Jeanette Schoon (Jenny Curtis), wife of the African National Congress operative Marius Schoon, as well as their six-year-old daughter Katryn, who were then living in Angola.

Benson Craig is the only cigarette manufacturer in Botswana and was apparently established with the help of a government-supported industrial diversification project. Its stated mission is to provide the Botswana and southern· and Central African markets with “value brand cigarettes”, of “equal quality to imported international brand cigarettes, but at half the cost to the consumer”. The firm also offers to manufacture cigarettes for brand owners who do not have man­ufacturing facilities of their own and to provide technical advice to independent cigarette manufacturers in the region.

Other new entrants are United Africa Tobacco Manufacturers (UATM), belonging to the Rwandan Emmanuel Rutagamirwa, of whom little is known, and Falha Manufacturers (Pty) Ltd, whose proprietor is Calvin Pillay. First launched with one brand, Westleigh, it later also produced Westleigh Fresh, Westleigh Sky and Westleigh Platinum brands, and subsequently added such brands as Yallip, Fame and Lotus. The latest manufacturer to have entered the market is Best Tobacco Company of Johannesburg, run by its Lebanese owners Abdul Sabra and Mirna El-Ali. The firm was briefly a member of FITA before going it alone. It manufactures and sells the brand Caesar.

I have already explained that the total cigarette market, the complete “pizza”, is not held by local manufacturers only. Some of the big boys, Philip Morris SA for example, the makers of Marlboro, do not produce their brands locally but import them for local consumption.

Apart from the role-players you have already met, it is worth noting that there are many independent importers and traders who also import various brands for local sale, and so take a sliver of the “pizza” for themselves. One importer worth mentioning, purely because I believe them to be among the biggest in the country, is All Trans Logistics, which functions as a clearing agent. They briefly featured in a reported court case in 2017 when they imported 200 cases of cigarettes from Zimbabwe for a local client, storing them in their warehouse. The case revealed that this consignment (as well as another) was stolen from the warehouse. Their managing director is Keith Mordaunt, whom you will come to meet later.

There are simply too many of these smaller clearing agents, traders and importers to mention here, but probably among the most noto­rious must be CEW Logistics, a transport company specialising in moving goods to and from South Africa and Zimbabwe. In November 2011, the company hit the headlines when owner Walter Cyril and his partner Letisha Pillay, together with SARS officials Waldo Headger and Nkhensane Maluleka, were arrested following a joint SARS and police raid at Cyril’s house in Bedfordview, Johannesburg. Cyril and Pillay also operated Tish Maritime (Pty) Ltd, a fairly large customs bonded warehouse. CEW Logistics was reported to have been an importer of large consignments of cigarettes from Zimbabwe, which were then stored in Tish Maritime’s warehouse. Tish Maritime also provided similar services to other importers.

The four were ultimately charged with over 200 counts of smug­gling contraband cigarettes. As the raid unfolded, the prosecuting authority also seized several assets including a few luxury cars, jew­ellery and immovable property belonging to the suspects. The scam they stood accused of involved fraudulently affixing customs stamps to the export documents of cigarettes that were never exported – in other words, ghost exports. But, as with so many of these criminal investigations, at the time of writing this case seems to have gone nowhere. I couldn’t find any record of it ever having been seen through to its logical prosecution.

* This extract is taken from Tobacco Wars by Johann van Loggerenberg published by Tafelberg and retailing for R310.