Factories Grind to a Halt as Zimbabwe’s Economy Implodes 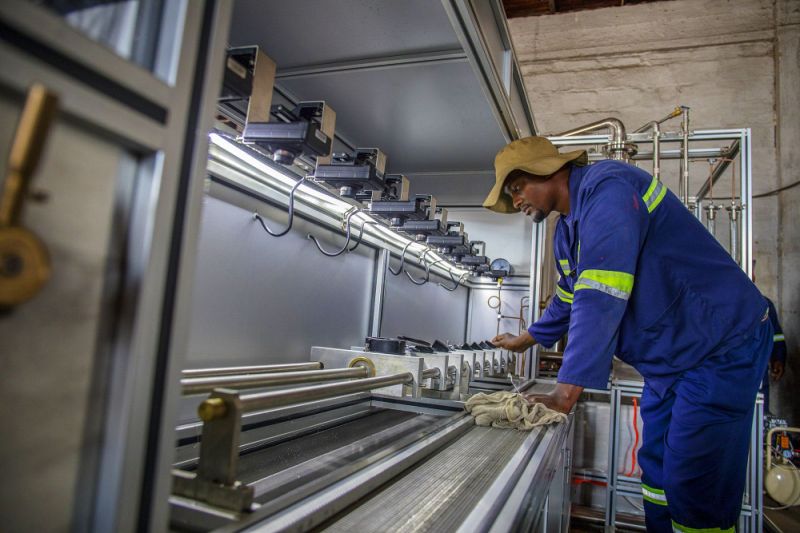 Gary Green is no stranger to adversity. The burly Zimbabwean has survived a brain tumor and rebuffed the seizure of his machinery business by people who claimed he was a foreigner and demanded he hand over control.

Now even Green’s resolve will be tested as an imploding economy, rampant inflation, and Zimbabwe’s crippling shortage of cash and electricity push his Bulawayo-based foundry, Anolle Castings and Engineering, to the brink. The nation’s second-biggest town, once the southern African nation’s industrial hub, has been hit hard as factories have either shut down or left.

At the heart of the sector’s crisis is Zimbabwe Iron & Steel Co. At one stage among the continent’s largest steel mills, Zisco hasn’t produced for more than 15 years, robbing companies like Green’s of reliable supply. The dystopian plant, between Bulawayo in the country’s south-west and the capital, Harare, stands as a symbol of the economy’s decline.

“Zisco is dead, it’s not producing anything so we have no raw materials,” Green, 57, said in an interview at his office. “At this rate, I see myself shutting down because there is no scrap metal.”

The government estimates gross domestic product contracted by more than 6% last year, while half the population is in need of food aid, inflation is running at more than 500% and the local dollar has depreciated by more than 90% against the U.S. currency in the past year. Rolling blackouts last as long as 18 hours a day.

While Finance Minister Mthuli Ncube is projecting a rebound in economic growth this year, with expansion of 3%, the prognosis is grim for the industrial sector — a Confederation of Zimbabwe Industries survey sees capacity utilization slumping further to 27% in 2020 from 36%.

Some companies operated for only six or seven months of last year, said Joseph Gunda, the industry association’s vice president.

Time has already run out for Footwear and Rubber Industries (Pvt) Ltd. The Bulawayo-based business closed in September with the loss of 500 full-time jobs. Besides supplying shoes to local retailers, industries and government departments, the company also exported animal skins, including crocodile, hippo and ostrich, to the U.S., Japan and Mexico.

Anolle is situated on the formerly bustling Khami Road in the Steeldale district of Bulawayo, about 440 kilometers (270 miles) southwest of Harare. Much of the nearby railway that snakes through the industrial area is overgrown, and motorists no longer bother to stop at crossings as the trains stand idle in the shunting yards.

In Kwekwe, 220 kilometers away on the route to Harare, Zisco’s once-imposing steelworks are a series of derelict buildings, rusting pipes and sheets of corrugated iron. As the natural bush encroaches, the buildings are increasingly home to ever-opportunistic monkeys and baboons.

Several attempts to revive the former state-controlled company have failed. Gift Mugano, Zisco’s acting chairman, said new investors will be sought this year, estimating that about $500 million will be needed to revive the plant. Industry Minister Sekai Nzenza, who was reassigned to the portfolio in November, said by phone she had visited Ziscosteel twice in the past 10 days, had met heads of the industry and would visit Bulawayo in the coming week to assess conditions.

The town faces other problems too. A long-running water shortage once led the city to organize synchronized lavatory flushing in a effort to save water. A decades-old promise to bring water from the Zambezi river hasn’t materialized.

Downtown, most buildings are in bad need of repair. George Ncube, a filling station worker, says the business hasn’t had fuel to sell for weeks.

“It’s becoming a ghost town,” he said. “If Zimbabwe is dying, Bulawayo is already dead.”

–With assistance from Brian Latham.

To contact the reporter on this story: Godfrey Marawanyika in Harare at gmarawanyika@bloomberg.net