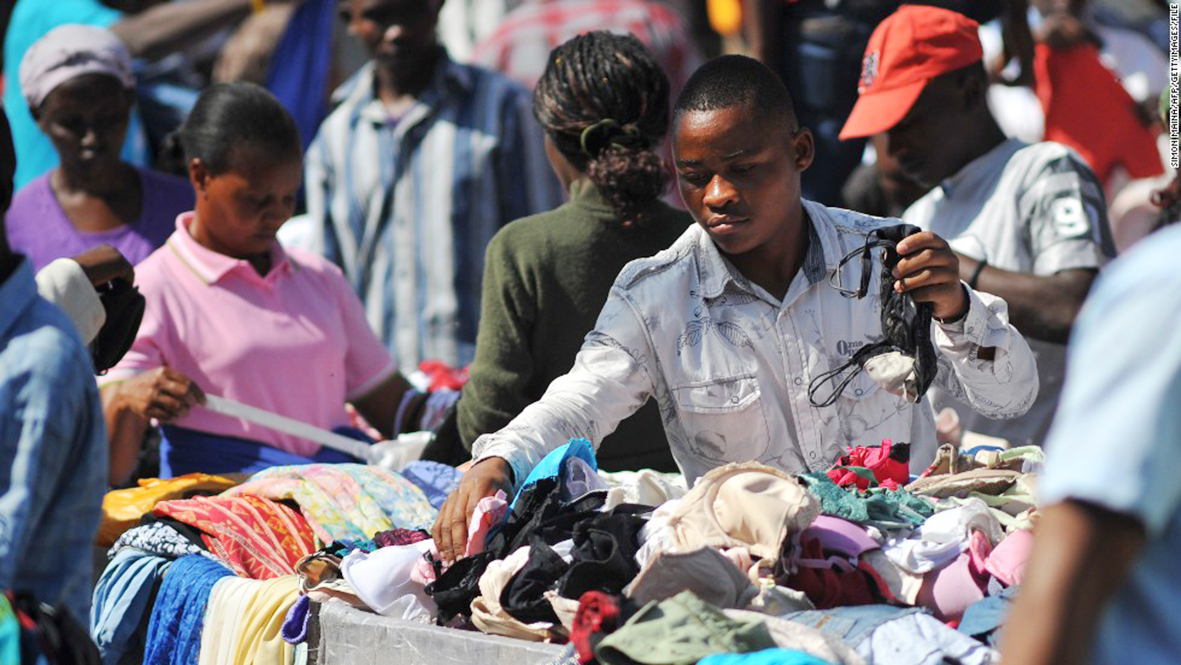 The blazing sun seems not to deter the hordes of people crowding around mounds of various clothing items heaped on tables and on the ground.

The enthusiasm and excitement is palpable as the eager buyers jostle and take uncoordinated turns to dig their hands into the piles of clothes trying to fish out their preferred choices.

“Dresses, dresses, come and buy these ones straight from New York. Everyone at church will envy you, even the pastor’s wife,” shouts one young man at the top of his voice.

On the next table, another dreadlocked young man prances around in a flared flowery dress.

“Come, come my sisters and see what Rihanna was wearing at the awards last year,” he says before adding a terse warning, “And allow the thrifty fingers to search you. They also need to survive.”

Women mostly make up the large crowds that throng the stalls that are lined up every day along the roads leading to Mbare high-density suburb and the Graniteside industrial area.

The buyers are not deterred by the grim setting or the pungent smell of uncollected garbage strewn everywhere.

On the fringes of the spirited activity some enterprising women are busy cooking all sorts of dishes and judging from the many customers, they must be reasonably priced.

“We do fresh chips, Russian sausages, roast chicken and we even do proper meals like sadza and beef stew. In the morning, we prepare tea, but mostly it is for the people selling,” says one of the cooks as she lumps an odd-looking soupy stew into a plate.

The second-hand clothes craze, which has been around for some years, has moved a notch higher as inflation soars and the economy takes another dip.

And hard-pressed Zimbabweans, no longer able to afford buying from conventional shops, have turned to the second-hand market, where a dress costs as little as US$3 or less depending on its condition.

In stark contrast, a new dress in town ranges from US$15 upwards, with some high-end shops  pricing their dresses well over US$25.

This is proving to be way beyond the reach of many who are earning a pittance, with the bulk of the workforce taking home less than US$200.

During weekends, Park Lane road in the capital’s central business district is transformed into a market and second-hand clothes are a hit.

“Many people are not comfortable going to Mbare and that is our target group. On Sundays, as they come from church in good spirits, we will be waiting for them,” said Sally Chirombe from Warren Park.

Chirombe sells an assortment of clothes, from dresses to skirts and blouses, as well as hand bags.

The source market of most of the clothes sold in Zimbabwe is mainly Mozambique.

On a good day, Chirombe says she takes home close to US$200.

“I have been doing this for years and managed to send my children to school. The eldest is now in university. He has promised me that once he starts working, I can stop and he takes over fending for his siblings,” she said.

Then there are younger traders also selling second-hand clothes to make ends meet.

“I could not get money to proceed with school even though I passed my ‘O’ Level. A friend introduced me to this business and am happy it puts food on the table. I even meet my former school mates and they support me,” said Fadzai Maseko.

Any plans to go back to school?
“Maybe, but for now, this is what I can do and besides, those with good education are worse off than me,” she laughs naughtily.

Health implications
While the second-hand craze seems popular, many have expressed hygienic and moral concerns, especially the sale of used undergarments.

These are quite a hit and women mostly prefer these to the ones in shops.

“I prefer these because they are strong, have a great and perfect fit and quite sexy,” giggles one happy customer as she tries a bra which costs between US$1 or US$2.

A new one now ranges between US$6 and US$8 depending on the shop.

Most are from China and women say they are not as durable.

A report produced by the Environmental Health Services branch, which is part of Health Department in Malaysia, noted that second-hand goods can actually carry a few health risks such as infestations from scabies, mice, lice and fungi.

Transmission of lice, said the authors, for instance, can occur through second-hand clothing and while many of these germs may survive only for a few days away from human contact, ringworms can remain contagious for much longer periods.

“Underwear is more likely to carry germs as they contain microbes from traces of faeces and from genital infections, such as thrush,” the report read.

Just as much as it is a health hazard, it has also become a moral concern.

During his tenure as Finance minister between 2009 and 2013, Tendai Biti lashed out at men for allowing their women to wear used underclothes.

“If you are a husband and see your wife buying underwear from the flea market, you will have failed,” he said.His scathing sentiments sparked off a heated debate on the subject, which trended for years.

“Second-hand underwear are not recommended due to issues such as the transmission of diseases such as fungal infections that can survive for longer periods of time,” said leading obstetrician and gynaecologist Solwayo Ngwenya, who is also Mpilo Central Hospital acting chief executive.

“However, should these items be bought, we recommend that they are disinfected before being used.”

In 2015 Zimbabwe banned the importation of second-hand clothes to help resuscitate the clothing industry.

However, seven years later, government seems to have relaxed the ban.

Three years ago, the global COVID-19 pandemic broke out, forcing government to again enforce the ban on the importation of the popular and cheap second-hand clothes.

This was part of measures to curb the spread of COVID-19 through contamination.

The challenge for the police, however, is that once the used clothes are smuggled in, they cannot arrest people selling them since it is difficult to prove whether or not the items were second-hand when they were brought into the country.