Tendai Mugabe in Harare and Rumbidzai Zinyuke in Mutare
Government has so far released $100 million as it intensifies efforts to assist victims of Cyclone Idai by way of restoring basic infrastructure and ensuring that the affected people access food and other basic necessities on time.

A management team, comprising  experts to oversee the reconstruction of Chimanimani and other affected areas, is being put in place.

“Government has been taking the lead in funding and last week we were given $50 million by Government through Treasury which has gone a long way to restore infrastructure,” said Minister Moyo.

“The Minister (of Finance and Economic Development Professor Mthuli Ncube) has informed Cabinet that he is going to release another $50 million so that we don’t stop work we are doing making sure that fuel is there for the helicopters, for the people who have donated groceries, all the dozers that we are using, tipper lorries, the excavators all we are buying because the Ministry of Finance was able to release money timeously.”

Buttressing Minister Moyo’s sentiments, Prof Ncube said: “For the record, the figure from Government in terms of finance is $100 million.”

He said in times of disaster, political and other opinion leaders become civic leaders who help the Government to identify people in need of assistance.

“When we have a disaster an MP for us ceases to be an MP of a particular party. He becomes a civic leader who we must use to mobilise and identify those who are suffering. So we have been working with civic leaders from MDC, civic leaders from Zanu-PF. The Zanu-PF civic leaders who ended up getting in those videos were pressurised to get grain from Chipinge. The Chipinge depot which is our focal depot away from Mutare has a lot of supplies and we had ordered to say no car goes into an area which we have not opened and goes there empty. If you have a four-wheel drive — we used Plan International, we used EcoSure, we used everybody with a four-wheel- drive who could penetrate into an area which we had not gone into. We wanted them to carry something.”

He said people were deliberately sensationalising a matter which they knew was not meant to hijack food for the benefit of a particular party. 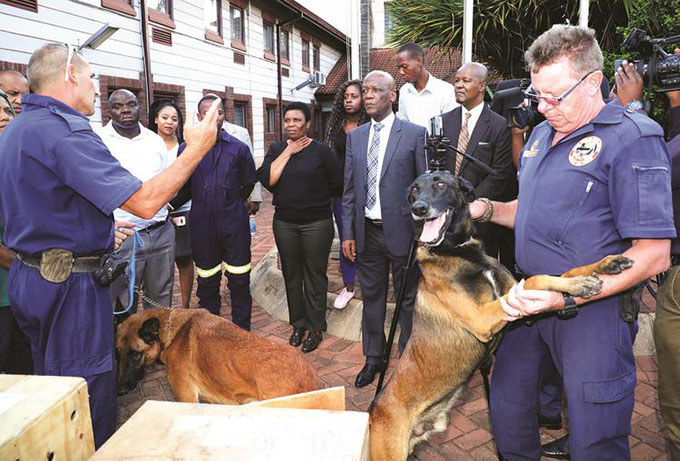 South African Ambassador to Zimbabwe Mr Mphakama Mbete (centre) listens as South African Police Service K9 Search and Rescue Warrant Officer Martin Bann makes a brief presentation while Warrant Officer Stephen Gouus (far right) and embassy officials look on in Harare on Tuesday. The team is in the country to assist in the search of bodies in Chimanimani. — (Picture by John Manzongo)

Earlier, Information, Publicity and Broadcasting Services Minister Monica Mutsvangwa had briefed journalists on Cabinet deliberations focusing on both short and long-term solutions Government ought to implement in case of future disasters.

“Cabinet received a comprehensive update report from the chairman of the Emergency Preparedness and Disaster Management Committee in the ongoing rescue and search efforts in the aftermath of the Cyclone Idai Disaster,” she said.

“Cabinet noted with satisfaction the considerable progress that has so far been made in reopening access routes to the severely affected areas in Chipinge and Chimanimani Districts. Cabinet also greatly appreciates the overwhelming response by local corporates, churches, individuals, as well as, cooperating partners and other countries in the region and beyond to calls by Government for assistance towards the victims of the disaster. Pertaining to the way forward, Cabinet resolved to intensify the ongoing search and recovery efforts, to prioritise the provision of clean water and sanitation, distribution of food relief, medical supplies and emergency shelter facilities and to hasten the opening of roads and rehabilitation of damaged infrastructure.”

Minister Mutsvangwa added: “To lodge a comprehensive appeal for disaster relief support and to invite local corporates and business associations to adopt schools and clinics for purposes of rehabilitating their damaged infrastructure.

“In the medium-term, to carry out a disaster vulnerability assessment of the Eastern Highlands area, with particular focus on the Chimanimani and Chipinge districts, to come up with a contingency plan which should address issues of land use planning, appropriate housing designs and construction, and where necessary, the relocation of schools and residential settlements; and to carry out measures to strengthen national disaster response systems, including expediting the establishment of a centre for monitoring disaster response system.”

Meanwhile, Minister of State for Manicaland Affairs Dr Ellen Gwaradzimba yesterday said the damage that had been inflicted in Chimanimani would take time to correct and needed to be handled by experts who would work with Government.

“In the majority of areas, repairs and maintenance is no longer possible and there is need for complete reconstruction. We are trying to put up a proper system because this is a big project that is going to be ongoing for some time.

“We require engineers who specialise in the construction of bridges, roads, water, power as well as doctors who will be working on this project,” she said.

She said Government needed a proper management system that would look at the immediate needs as well as the medium and long term issues.

“We are in the process of compiling a list of experts and skills we require to put the system in order. Most of our attention has been directed at rescue operations for the victims of the cyclone but we still have a province to run, we do not want all other activities to stop. We will put a structured management system so that my role will be to monitor and coordinate and not be on the ground all time so that we continue to carry out other activities,” said Dr Gwaradzimba.

She said an IT expert had already been seconded to the provincial CPU and he would be responsible for coming up with a ICT system that would track all projects that needed to be carried out and their status.

“Project cyclone Idai will be running for a while because like I said, some roads need a complete reconstruction and there is need for relocation of those people, so the amount of infrastructure and other amenities will take a bit of time to put in place,” she said.

She added that Government wanted to also come up with a sustainable method of assisting the victims of cyclone Idai to ensure that they become self-reliant again and not always rely on food handouts.

UN resident coordinator Mr Bishow Parajuli urged Government to quickly come up with an inventory of the infrastructure that had been destroyed to enable development partners to come up with rescue packages that suit the extent of damage.