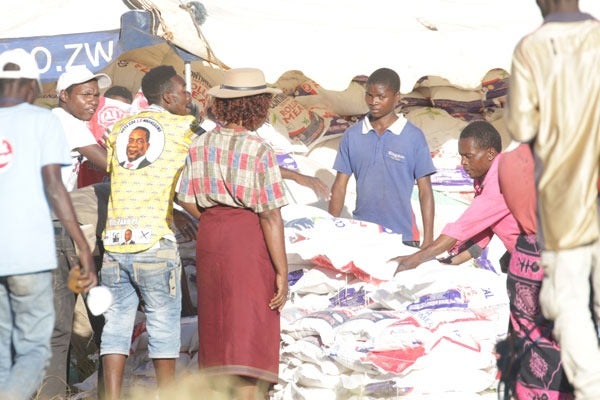 BY TAPIWA ZIVIRA
The Zimbabwe Peace Project (ZPP) has urged government to deal with the numerous reports of partisan food aid distribution and ensure that every deserving citizen does not go hungry as the country faces one of its worst droughts in decades.

“Discrimination in the distribution of food and other aid remained problematic in the month of December 2019 with a 22.7% contribution to the total recorded violations. The violations also affected citizens’ other rights and freedoms such as the freedom of association,” reads part of the report.

“Communities have been receiving food aid and agricultural inputs as the rainy season has started. Unfortunately, the aid has been manipulated in many cases for political mileage and as a retribution tool. Supporters and perceived supporters of the MDC continued to be targeted with this form of discrimination as they were being punished for their political affiliation.”

One of the cases recorded by ZPP implicates a Zanu PF official in ward 14, Gokwe Gumunyu.

“Villagers gathered at Nyamhara Business Centre to receive rice which had been disbursed by the government and was meant for every villager. The Zanu PF chairperson in the area, Joe Madzana informed the villagers that all the aid which is delivered in the area passes through Zanu PF structures as the ruling party and that those not in Zanu PF structures would never receive aid from the government. He then proceeded to force the villagers to sing Zanu PF songs and chant the party’s slogans. He dared those who had been aggrieved to report anywhere they wanted as nothing would happen to him,” reports ZPP.

In its report, ZPP point out that legislators were among the perpetrators of politicisation of aid.

“On 29 December 2019 where close to 500 villagers from Mudzi North convened at Nyamuyaruka Business Centre to receive drought relief rice from the government.

The rice was distributed in a partisan manner by a Zanu PF Mudzi North ward chairperson Gilbert Makazhu with the guidance of Mudzi North Legislator.

Three MDC supporters were denied the rice and the legislator told villagers that MDC supporters would never benefit from government aid and inputs since their legislators do not recognize President Mnangagwa as the constitutionally elected President of the Republic of Zimbabwe in Parliament.”

ZPP urged lawmakers ‘to act in a manner that unifies communities as they represent every member of their constituency in Parliament.’

This is not the first time there has been reports of politicisation of food aid.

In March last year, at the height of the Cyclone Idai disaster in Manicaland, a NewsDay crew filmed and published a video showing partisan food aid distribution.

This prompted swift condemnations from individuals, organisations and companies that were coming together to donate necessary requirements towards the disaster, which claimed hundreds of lives and left communities destroyed.

Newer Post
LATEST: Mnangagwa won’t fly out as he goes on annual leave
Older Post
How African countries can cut cost of bandwidth