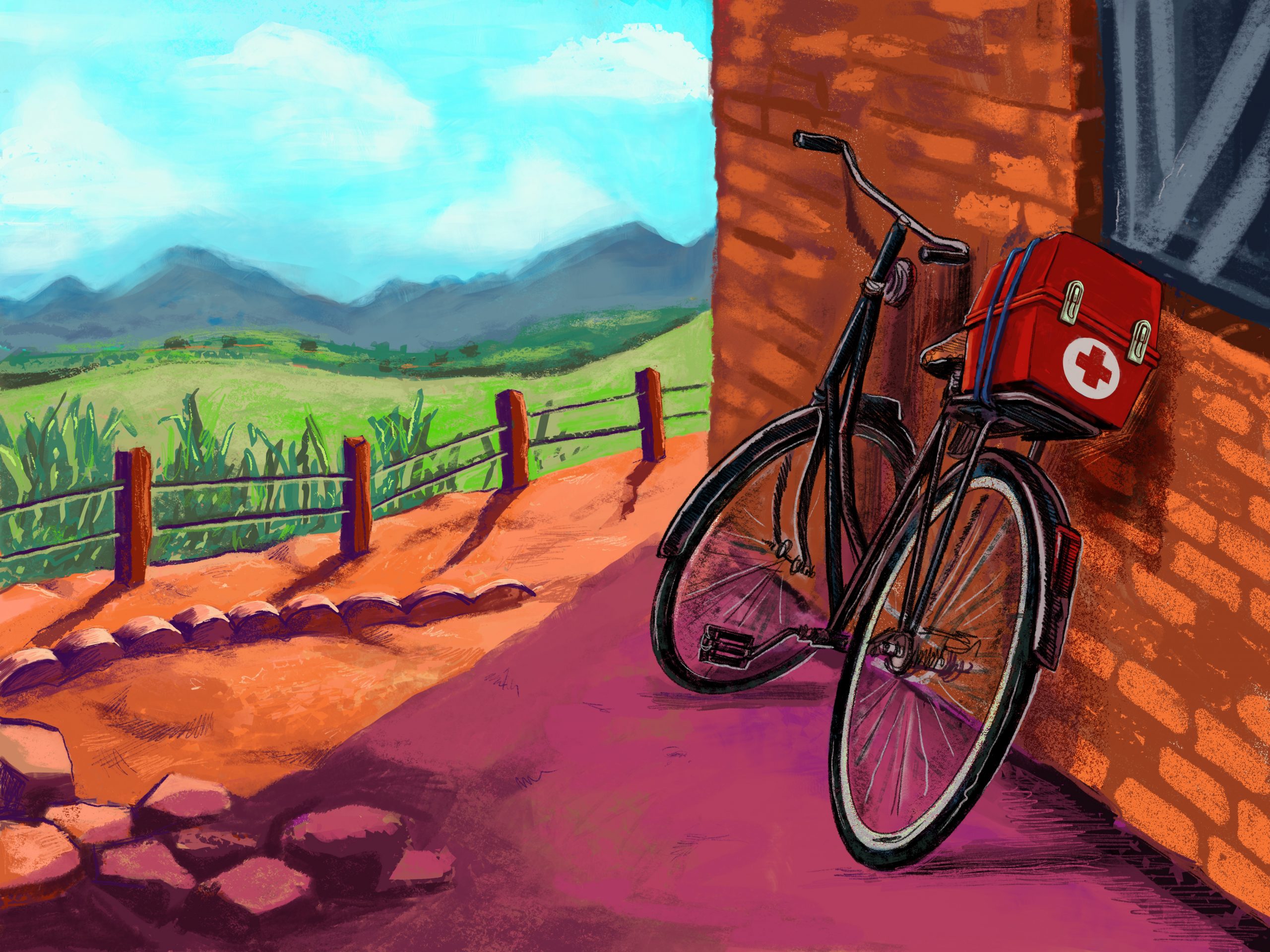 MUROMBEDZI, ZIMBABWE — On a normal day, Bernard Mhondiwa rides his black bicycle between this village’s houses and huts, conducting spot health checks. As a village health worker, or VHW, he weighs babies, diagnoses illnesses such as malaria and the flu, supplies medications and much more.

Mhondiwa has done this for 20 years, sometimes laboring into the early evening for residents of this farming village about 108 kilometers (67 miles) west of Harare, the capital.

But the coronavirus pandemic has stopped the tall, slim man in his bicycle tracks. Mhondiwa fears being infected, so he has halted home visits. His patients aren’t happy, and neither is he.

“It stresses me that I’m unable to follow up on people who rely on me,” says Mhondiwa, 51. “I know some patients are affected badly by my absence.”

The plight of Mhondiwa and his patients echoes throughout Zimbabwe’s rural areas, which often offer little by way of dependable health facilities. Residents worry that they have to do without what many see as a front-line resource for primary medical care.

“The VHWs approach has been one of the innovative approaches to address the resource scarcity in the health system,” says Itai Rusike, executive director of the Community Working Group on Health, a nongovernmental organization that focuses on boosting community participation in health matters.

Zimbabwe’s health sector faces myriad challenges amid a years-long economic crisis, from a shortage of drugs and equipment to a growing brain drain, as medical professionals leave the country for more lucrative opportunities.

The Village Health Worker program started in 1981. Chosen by community members, the workers need neither formal certification nor tertiary education.

Yet they are effective. Their close community ties have allowed them to reduce cases of communicable diseases while boosting villagers’ antenatal care and use of clinics and hospitals, according to a report by UNICEF, the World Health Organization and the Zimbabwe Ministry of Health and Child Care.

More than 18,000 village health workers are scattered throughout Zimbabwe’s rural areas, according to UNICEF, which works closely with the Ministry of Health and Child Care on the health worker program.

Mhondiwa says he followed his mother’s path “after seeing how she was making a difference in the community.” He earns $45 every three months and bolsters his income through farming.

Mhondiwa serves people in three villages with a total of 146 families. Farm fields dominate the area, where residents grow corn, nuts and sweet potatoes. Mango trees crowd the yards of many villagers, who sell the fruit at roadside stands.

Because he stopped home visits, Mhondiwa can no longer serve people like Oscar Munyoro, 45, who is HIV-positive and relied on Mhondiwa for his medication for four years.

Munyoro says he now must travel more than 30 kilometers (19 miles) for his medicine, “and sometimes I fail due to money issues, and this has been affecting my well-being.”

Eveline Marimo, 51, has just had her fifth child. She says village health workers have supported her during each pregnancy.

During three of them, Mhondiwa led her through bureaucratic processes such as pregnancy registration (in which patients inform a clinic or hospital that they plan to deliver there); helped get her a birth assistant at the local clinic; and made sure she got postnatal care.

Marimo says cultural beliefs once kept many residents from giving birth at clinics. But the health workers “have opened our eyes.”

“I have had to forgo baby weighing for months because the village health workers are not conducting home visits,” she says, “and the tablets such as pain killers that we easily got from Mhondiwa have run out and we have no way of accessing them.”

The Community Working Group on Health has trained the health workers during the pandemic, hoping villagers will see them as trusted sources of information. The health workers can also support contact tracing efforts, Rusike says.

The government, however, has not provided the village health workers with personal protective equipment, he says. As a result, “the VHWs are extra worried about their own safety.”

Paul Ngwakum, UNICEF’s chief of health and nutrition in Zimbabwe, defends the Ministry of Health and Child Care. Although the organization has prioritized the protection of the health workers, he says, “one of the biggest challenges that remain is insufficient [protective gear].”

The government and other organizations, he says, are searching for solutions to supply adequate personal protective equipment for village health workers.

Despite training from the Community Working Group on Health, Mhondiwa doesn’t feel safe.

“If trained medical professionals can contract the disease, what about us who do not have any medical qualifications?” he says.

He has a few masks and gloves, along with hand sanitizer, he says, but they aren’t enough. So he spends his days farming at his 1.2-hectare (3-acre) homestead, where he grows mostly corn, along with a sprinkling of sorghum, sweet potatoes, nuts and millet.

“I would rather stay home than risk my life,” he says.