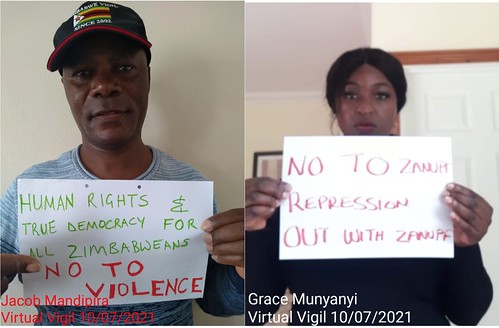 The letter said Zimbabwe was under siege as citizens’ rights continued to be violated. ‘We write to call your attention to the disturbing trend in Zimbabwe of weaponising the criminal justice system to stifle dissent and suppress the activities of human rights defenders and journalists.’

It continued: ‘We are particularly concerned that the arrests and charges against individuals are politically motivated and violate their human rights, including their personal liberty and freedom of expression.’

The letter also expressed concern over the proposed Patriotic Bill, which will criminalise Zimbabweans speaking negatively about Zimbabwe on international platforms (see: https://www.newsday.co.zw/2021/07/rights-bodies-flag-un-over-zim-rights-violations/).

Meanwhile non-governmental organisations in Masvingo have been summoned to a meeting with the provincial development co-ordinator, Jefta Sakupwanya, next week. New Zimbabwe quotes sources as saying he wants to ‘clip their wings’.

Sakupwanya’s counterpart in Harare, Tafadzwa Muguti, started the crackdown when he ordered NGOs based there to report to his office. They have refused, saying his directive had no legal force (see: https://www.newzimbabwe.com/govt-intensifies-crackdown-on-ngos/).

A Zimbabwean NGO, the Research and Advocacy Unit (RAU), has expressed fear of violence with national elections looming in 2023. RAU called for the military to be confined to barracks ahead of the elections and for the prosecution of anyone making hate speech to avoid a bloodbath.

RAU consultant Tony Reeler points to a survey by the research organisation Afrobarometer, which indicates that a majority of Zimbabweans are dissatisfied with the government. ‘Only 48% trust President Emmerson Mnangagwa and this suggests the increasing probability that the 2023 elections will be very violent. It is worth noting further that elections are usually violent where Zanu PF’s hold on the presidency is seriously challenged.’

He said that, looking at the statistics, no ruling party in a ‘normal country’ would win an election (see: https://www.dailymaverick.co.za/article/2021-07-09-the-numbers-dont-lie-zanu-pf-would-have-to-defy-the-reality-of-political-economy-to-win-the-next-election/). The Vigil believes that Zimbabwe is by no means a normal country.