In Zimbabwe, power outages force women to deliver by candlelight

It was after sunset and the electricity supply had been cut.

“Midwives were using candles and torches for lighting,” said the 26-year-old, holding her second-born. “I delivered in the evening, there was no electricity.

“There was a candle on the table. I heard the midwives say that they could not see properly, so they had to use torches as additional light sources. As one midwife assisted me, the others held the torches.

“I was just praying I deliver well, without complications. I feared the worst and sighed with relief when it was over.”

High-quality maternal healthcare is difficult to access and provide in Zimbabwe, a country struggling with regular power outages – sophisticated equipment relies on electricity.

Women across the country have reported similar experiences to Matarause, relying on a small flame or a cellphone to provide enough light to give birth safely during power blackouts.

While the power is not switched off at large referral hospitals in Harare, such as Harare Central Hospital and Parirenyatwa Hospital, it is cut at most facilities in residential suburbs and rural areas.

A midwife at Mufakose Polyclinic, where Matarause welcomed her child, said the team usually asks pregnant mothers to provide their own lighting.

“[We] ask them to bring bulbs with batteries as it is difficult to see when using candle lights,” she told Al Jazeera.

Most women in Zimbabwe deliver at state-run hospitals, which charge a small fee, about 200 Zimbabwean dollars, that goes towards basic equipment. 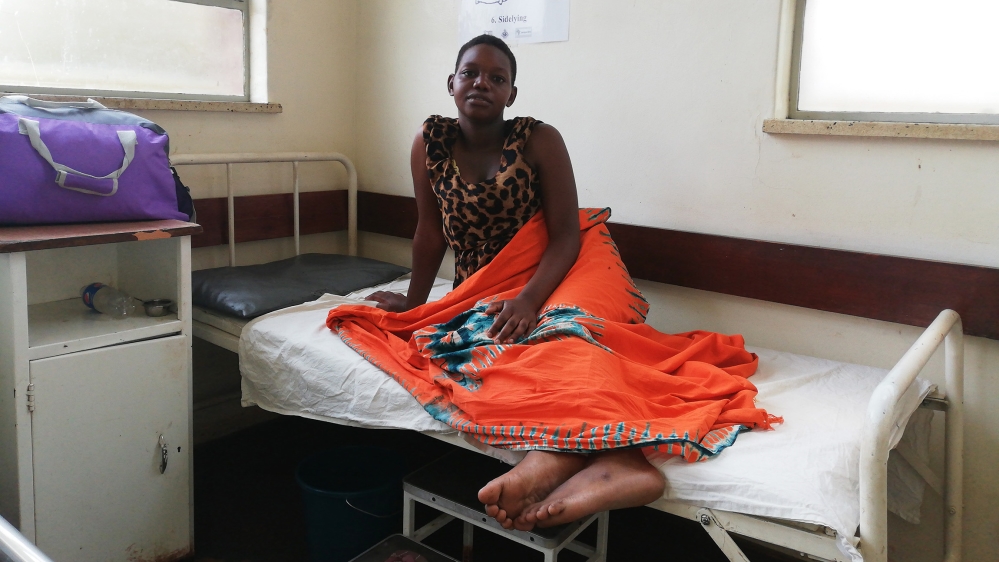 Because of power outages, some hospitals purchase fuel at cost price from service stations for generators [Farai Shawn Matiashe/Al Jazeera]

The United Nations Population Fund describes Zimbabwe’s rate as “unacceptably high”, even as the last five to 10 years show a decline.

Some hospitals and clinics, including private facilities, use fuel generators, but this option is out of reach for many – diesel and petrol are expensive with a 300-percent inflation rate as of August 2019, according to the IMF.

The fuel price is determined by the Zimbabwean dollar and US dollar interbank exchange rate.

At Chiredzi Hospital, a government-run facility almost 500km southeast of Harare, when authorities fail to purchase fuel for generators, midwives do whatever it takes to save lives.

“Hospitals need to provide comprehensive obstetric [and newborn care], among other things such as responding to emergencies and doing surgery.

“That’s where the power issues come in. With the current cost of diesel to run generators, the situation is dire,” said Chiredzi district acting medical officer, Dr David Tarumbwa.

“We buy fuel straight from service stations at cost price, no subsidies. It’s not sustainable. You can’t run a generator for 12 hours daily. The next thing is, it breaks down.”

When they do not have generators, the doctors and nurses “explore whatever options will be available”.

“A normal childbirth occurring during the day may actually go through without much use of electricity. However, if it were to occur in the night, the priority is lighting.

“A complicated delivery may require electricity for resuscitation of the baby, warmth from radiant heaters, lights and operative delivery.”

Against this backdrop, new technology that does not rely on fuel is being tried out. We Care Solar, a California-based NGO, and the United Nations Development Programme (UNDP) are working with the government to install solar power systems in clinics and hospitals nationwide.

More than 4,000 health centres in Africa and Asia have been equipped with this technology.

Since 2016, We Care Solar has supported 136 maternal health facilities with reliable lighting and electricity in Zimbabwe, in the provinces of Matabeleland South, Mashonaland East and Masvingo, and aims to extend its project to other clinics across the country.

“Before year-end, we aim to officially launch the Light Every Birth campaign in collaboration with the health ministry,” said We Care Solar Zimbabwe programme manager Shamiso Moyo. “We aim to install the solar system at a total of 1,000 clinics.”

UNDP also partnered with the health ministry on a Solar For Health Project and installed solar systems at 405 institutions across the country to ensure uninterrupted power, including at maternity wards.

“They are now primarily running on solar and only using the mains electricity grid as backup. The systems vary in capacity, depending on the size of the medical facility. Smaller clinics are now running on 5kW or 7kW, while larger clinics and district hospitals run on 10kW, 15kW or even 40kW systems,” said UNDP Zimbabwe resident representative Georges van Montfort.

He hoped that eventually, no woman would ever have to deliver by candlelight again.

As the rest of the country waits, however, Mahlangu said that while the use of candle and cellphone lights during delivery is not recommended, midwives will continue to use whatever means they have to offer women support during their critical hours in labour.

“Midwives cannot leave a woman unattended because of lack of electricity,” he said, “and childbirth will not stop because there is no electricity.”