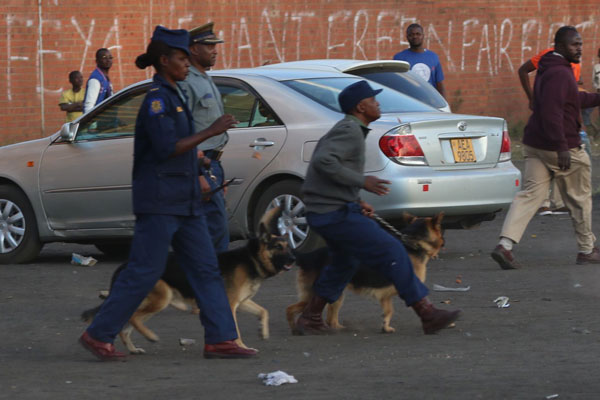 Constable Bwanyali allegedly carried out the nocturnal visits in the company of two Zanu PF youths, NewsDay has heard.Their last raid was on Wednesday night.

Sources revealed that the trio arrived at Chikangwe kiosk shops around 8:30pm and demanded trading licences.

One of the victims said: “The ZRP officer, who was in uniform with his police dog demanded a licence. When I enquired the rationale of asking for a licence at night without Karoi Town Council officials, he said we were under arrest and wanted to take us to the charge office.

“After I refused to give him the licence, two youths who claimed to be from the Zanu PF party said we could pay US$5 to avoid arrest. I refused and they went away.”
Several shop keepers confirmed the visit by the police officer and Zanu PF youths.

“Yes, it is true that some shopkeepers were forced to release their licences to the cop who had his dog with him,” Mabhutsu said.

“He claimed he was working under instructions from his superiors. When he was confronted, he left immediately.”

Zanu PF acting national spokesperson Patrick Chinamasa yesterday said he was not aware of the incident, but accused the youths, if indeed it was true, of tarnishing the image of the party.

Chinamasa asked for time to investigate the matter to establish the truth about the incident.“As a matter of fact, Zanu PF is not a police force,” he said.

“Therefore, no one within the Zanu PF structures can arrest people. We don’t have the powers to arrest, but it’s the duty of law enforcement agencies. There may be some people masquerading as Zanu PF youths whose aim is to tarnish the ruling party. We need to investigate the case so that culprits are brought to book,” he
said.

National police spokesperson Assistant Commissioner Paul Nyathi called on those affected to make a formal report so that investigations can be carried out.
“As ZRP, we call upon those who have cases against any of our officers to make formal complainants so that investigations can commence. No one is above the law and those found to be against the law will face the full wrath of law,” Nyathi said.

Of late, some former and serving army and police officers have been implicated in robberies across the country.