Kaunda and Mugabe: A tale of two deaths

Source: Kaunda and Mugabe: A tale of two deaths | The Standard 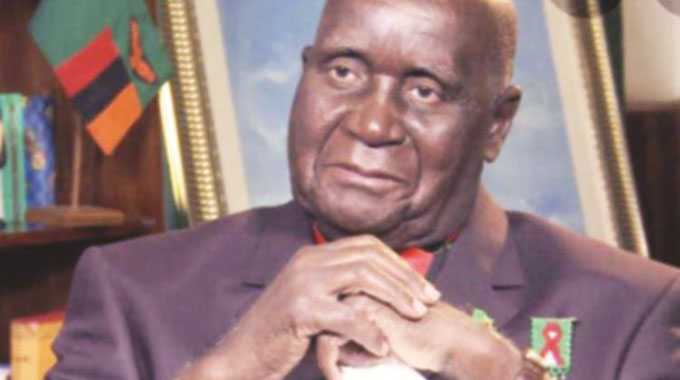 Former Zambian president Kenneth Kaunda passed on three days ago at 97. His death forces a sad comparison with our own Robert Mugabe, and Zimbabwean politics too.

Kaunda led Zambia to independence from British rule in 1964 and ruled for the next 27 years. Getting increasingly frail — naturally — he was pronounced dead at a military hospital in Lusaka after battling with pneumonia for some time.

He succumbed to local and international pressure to adopt multi-party democracy after ruling Zambia for more than two-decades under strict, sometimes comical, one-party rule with the United National Independence Party at the helm. The winds of change were blowing.

The majority of Zambians were getting impatient with his centralist style of government and the economy was squealing. The people wanted new faces and new ways of politics, so it was not a surprise that Fredrick Chiluba, a former trade unionist, beat him hands down when Zambia held its first ever multi-party elections in 1991.

When it comes to the economy, there isn’t much — even up to this day — that you will remember Kaunda for with fond memories. People were jobless. People were hungry. Shops were empty. And the roads were full of potholes, so much so that there was a popular joke even here in Zimbabwe to the effect that you could drive straight on Zambian roads only if you were drunk.

But there is a painful irony that comes with this. When Zimbabweans were laughing at Zambian roads and the Zambian kwacha, we were living quite a good life by African standards. Our roads were smooth and straight. We even had trains running on our rails. There was electricity and the hospitals were working well. You could get a job even before finishing school and whole villages accompanied their loved ones to the then Harare International Airport to bid them farewell, because it was such a prestige and honour to experience the splendour of the place.

Not anymore, of course. The airport is now an eyesore and gold smugglers are hassling you out of the departure lounge. Planes are landing without the aviation guys knowing a single thing about the strange arrivals and there are more warthogs on the runways than planes.

Well, Zambia could be pretty in the same state, but you can’t quarrel with the fact that our northern neighbours are better than us now. Post-graduate degree holders are trooping to Livingstone, Lusaka and other places to buy cheap beers and clothes for sale here. The Zambians are now—come to think about it—laughing at us from under their armpits for the potholes on our roads!

And, naturally, when you get the sad news of Kaunda’s passing on, you can’t help but trek back to Mugabe and then see how people can be so different despite some similarities. Let’s start with the two deaths in themselves.

Mugabe died at 95 in September 2019, almost two years after being deposed through a smart coup. He died in Singapore, where he had spent long months receiving treatment for a cocktail of ailments associated mostly with old age. Kaunda died on Zambian soil, at a humble local hospital.

Now, there is a whole tragedy to tell on this mere fact. Both ex-presidents became popular mostly for pushing a pan-African agenda. Zambia became a hotspot of terrorist attacks from apartheid South Africa and Ian Smith’s Rhodesian Front for helping liberation movements fight for majority rule in their respective countries. When Zimbabwe became independent in 1980, the majority of African states had already acquired independence from colonial rule, but there was South Africa and Namibia in southern Africa that were still reeling under apartheid.

Mugabe had the big heart then, to reciprocate the hospitality and generosity of fellow African nations, Tanzania, Botswana, Angola, Malawi and Zambia included, when they helped Zimbabwe attain independence. Because of that, Zimbabwe became a target for apartheid terrorist attacks too. For some time after Namibia got independent in 1990 and South Africa four years later, Mugabe was loud enough on his call for the African renaissance and an Africa free from western neo-imperialism.

Sadly, though, the mere location of Mugabe’s death becomes a symbol of his twilight hypocrisy where pan-Africanism is concerned. It shows that he had become fatally pessimistic of the ideals and aspirations that he got globally popular for. Mugabe repeatedly declared that he would die on Zimbabwean soil because that was home for him.

Even when the coup was unravelling, he still maintained that he would die at home. But he died in Singapore. He no longer had faith in the local health delivery system, which he had laboured over the decades to destroy as he increasingly became self-centred, greedy and unfeeling to the plight of the people. He died as a medical refugee thousands of miles away from home. He was no longer pan-African, needless to say he no longer loved his own country and its people. His death put the last nail on his claim of pan-Africanism.

Contrast that with Kaunda. It’s already said that he died at a modest local hospital. Despite the problems that Zambia was suffering and continues to suffer—quite a number of which he was the architect, on his own admission—he remained loyal to his nationality. Unlike Mugabe, he died humble and accessible to Zambians and fellow Africans who needed advise.

You can say that Kaunda died with a free conscience that he was Zambian and African. He had had his fair share of enemies, especially after being defeated at the polls. Actually, at one time, he was stripped of citizenship by his political foes. Imagine! But he remained the figurehead that he had always been known for and forgave his adversaries, even offering them advice as a true nationalist.

Mugabe died a bitter man. In fact, this bitterness is what speeded up his demise. He couldn’t come to terms with the fact of being forced out of power by his own cronies, and having become so unpopular with the generality of the citizens. Where Kaunda chose the wisdom of moving on after being defeated at elections, Mugabe dug in.

Weirdly, he got into this illusion of thinking that people, who were voting against him didn’t know what they were doing and were being influenced by the west. As a result, he mounted seriously retributive campaigns against his critics and opponents, murdering, persecuting and maiming thousands in the process. Today, there are so many women that Mugabe turned into unwilling widows when he killed their husbands. And so many kids who don’t know their fathers or mothers or both because of Mugabe’s refusal to accept the fact that he had outlived his value.

Quite tellingly, it was Kaunda who came to Mugabe when the coup was unravelling and advised him to step down rather than face the humiliation of being pushed out. In his typical arrogance and one-tonne-ego style, Mugabe wouldn’t listen. He still believed that he was the best thing to happen in all civilisations after Jesus Christ.

When Mugabe passed on, most of the news screamed “strongman”, “dictator”, “autocrat”.  They remembered him for all the bad things. Even the government-controlled media hardly had any plaudits for him. With Kaunda, it’s different. His erstwhile enemies and admirers are joining ranks and hailing him as an icon of African liberation, as former South African president, Thabo Mbeki, has just put it. And Mugabe is hardly being mentioned in the hall of fame for former liberation icons.

One hopes the current leaders of Zambia and Zimbabwe will draw lessons from this. Kaunda hated coups and the persecution of citizens. Mugabe loved it. Zambia will soon be holding an election, but there are concerns of shrinking democratic space under Edgar Lungu.

Zimbabwe, whose administration is heavily militarised after the army-assisted takeover from Mugabe, will be going to elections in two years, also amid concerns shrinking democratic space too. But if Lungu and Zimbabwe’s Emmerson Mnangagwa could take a leaf from Kaunda’s big-tent style, life would be far much easier for Zimbabweans and Zambians.

l Tawanda Majoni is the national coordinator at Information for Development Trust (IDT) and can be contacted on tmajoni@idt.org.zw