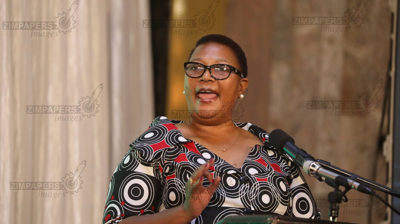 Kagodora and Mamuse went to court after MDC-T interim secretary-general Douglas Mwonzora said MDC Alliance legislators and councillors that were recently recalled by his party would not be allowed to contest for positions at the congress.

The extraordinary congress was ordered by the Supreme Court, which ruled that MDC Alliance president Nelson Chamisa’s succession of the late MDC founding leader Morgan Tsvangirai was illegal.

Last month the court gave the MDC-T up to the end of next month to hold the congress.

Kagodora and Mamuse said before the congress is held, the party’s various internal organs must be involved.

The meetings were to be followed by provincial council meetings to nominate their preferred presidential candidate from October 25, but no notice of such meetings has been issued.

“The details of the venue, time or platform for the meeting have not been advised to applicants, who are entitled to attend such meetings,” they submitted.

“If a proper notice is not issued, and if the details of the meetings are not shared with the applicants, they stand to be excluded from the internal democratic processes of their party in violation of the constitution of the party.

“The dates for the meetings are close. The matter cannot wait.”

They added: “Respondents also announced that they had prepared a database of the electoral college to be used for the extraordinary congress.

“They further stated that all persons, who had been recalled from parliament or councils had lost party membership and were not entitled to attend the extraordinary congress.

“Given the fluidity between the MDC structures and those of the MDC Alliance, it is difficult to determine eligibility to these processes.”

Kagodora and Mamuse said it was important for the electoral college to be publicly shared to all members to provide clarity on this aspect and avoid arbitrary disenfranchisement of perceived political opponents or inclusion of non-eligible persons in the processes.

They want the court to issue a relief order directing the respondents to furnish them with full details such as date, time, venue, agenda and form of meetings with respect to all meetings in which they are entitled to attend in terms of the constitution of the MDC-T including all meetings of the national council, provincial councils, district councils, ward executive meetings and branch executive meetings.

The duo also asked Bhebhe as the organising secretary to furnish them with copies of the electoral college that will be used for the purposes of the extraordinary congress.

They asked the court to issue an order interdicting the respondents from barring from the extraordinary congress any person who was a bona fide member of the party as at the time the Supreme Court judgement.

Meanwhile, the High Court will tomorrow hear an application by a Kwekwe resident seeking to bar Khupe from carrying out her parliamentary duties.

Khupe and 14 of her associates were sworn in last week to fill in 15 proportional representation seats left vacant after she recalled 32 MDC Alliance MPs and 165 councillors.

Charles Madhiwa filed the court petition a day before the swearing-in ceremony seeking to interdict the parliamentary process.

Khupe immediately declared herself leader of the opposition in the House after the swearing-in.