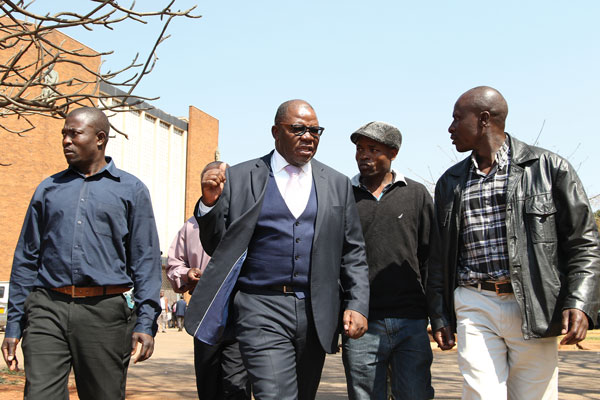 THE Law Society of Zimbabwe (LSZ) has poked holes into government’s recent directive deferring payment of rentals and stopping tenant evictions during the lockdown period, saying the move was illegal and likely to be
challenged in court.

to the tenants, it condemned landlords and property owners to penury as they were expected to carry their
tenants’ burdens until the end of the lockdown on May 17.

President Emmerson Mnangagwalast week proclaimed Statutory Instrument (SI) 96 of 2020, Presidential Powers (Temporary Measures)(Deferral of Rent and Mortgage Payments During National Lockdown) Regulations, 2020, giving tenants breathing space to pay their rentals for April and May in instalments after the lockdown.

“It is the LSZ’s considered view that the above basis as stated in the preamble to the regulations does not meet the criteria set out in section 2 of the Presidential Powers (Temporary Measures) Act,” LSZ said.

“The situation as given above does not address the interest of defence, public safety, public order, public morality, public health, the economic interest of Zimbabwe or the general public interest. The situation describes
an economic difficulty in respect of a section of the population and only in respect of a section of the national economy. In this regard, therefore, the LSZ believes the regulations are ultra vires the enabling Act.”

“It is the LSZ’s belief that SI 96 of 2020 would therefore be irrational when measured against the principal law from which it draws its authority.”

The lawyers’ association said government should have proffered other solutions such as ordering public entities such as power utility Zesa, the Zimbabwe National Water Authority (Zinwa) and local authorities to suspend or defer
service charges to cushion the public against the negative effects of the COVID-19 pandemic.

“Instead of holistically solving the burden brought about by the lockdown, the SI seeks to take the
burden from one citizen and thrust it upon another who may also be suffering the consequences of the lockdown.

It is the expectation of the LSZ, its membership and the populace that government will cause public service providers like Zinwa, local authorities and Zesa to suspend or defer charging for their services which are basic needs if the inspiration behind SI 96 of 2020 was to cushion the public against the negative effects of the COVID- 19 pandemic,” the statement read in part.

“The LSZ believes government could have approached this issue in a more holistic manner if indeed the rationale was to reduce the burden of COVID-19 effects on the populace.

It is important that during these difficult times and at all times, every State action must be lawful, transparent, compassionate and conform to domestic and international human rights standards.”

Shumba argued that some landlords survived on rentals from their properties, thus deferring
payments would condemn them to starvation.

The Insurance and Pensions Commissions (IPEC) also said that the failure by tenants to pay rentals on account of business closure was going to result in a serious reduction in investment income.

IPEC commissioner Grace Muradzikwa,however, told NewsDay recently that they had called on industry to assess the impact and arrange engagements with the government.

In another matter, lawyer and MDC Alliance vice-president Tendai Biti said he was looking at SI 99 of 2020 with a view to challenging discriminatory measures put in place by Mnangagwa’s government, allowing Zupco buses and formal businesses to operate, while systematically closing out commuter omnibuses and the informal sector.

MDC Alliance leader Nelson Chamisa said the lockdown’s new rules allowing the formal sector, which only constitutes
around 10% of the economy to operate, while exposing the majority in the informal sector to vagaries of the lockdown, violated the Constitution.

You can’t just say we will continue with the lockdown where informal traders are not trading.

You are paying a blind eye and a deaf ear to their concerns of livelihoods. Livelihoods are very important, you know you can’t just cage an animal and not give it food and oxygen, unless if you either want to suffocate it out of cruelty, suffocate people, but you have to give mechanisms of survival for the informal traders and the workers, even for the unemployed,” Chamisa said.

“We commend the government for their efforts, however, the funds which they announced are a small gesture. It is not enough to cater for the people for a long time. They also need to start thinking of their long-term plans
as to what the informal sector is going to live on after the lockdown,” Zvakada said yesterday.