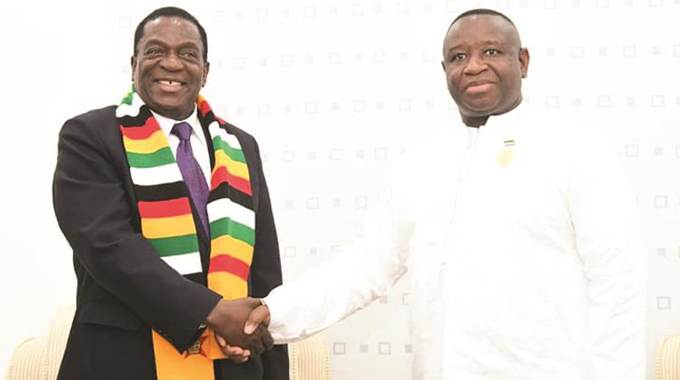 Tendai Mugabe in NOUAKCHOTT, Mauritania
Government has so far recovered US$850 million out of the US$1, 4 billion illegally externalised by corporates and individuals following a three-month moratorium given by President Mnangagwa upon his assumption of office in November last year.

The amnesty was part of broader measures implemented by President Mnangagwa’s administration to curb corruption.
At the expiry of the moratorium in March, US$591 million had been repatriated, but President Mnangagwa told delegates attending the 31st Ordinary Session of the African Union (AU) General Assembly here on Sunday night that the amount returned home now stood at US$850 million.

The President made the disclosure while making a contribution during a plenary discussion on the theme of the summit which focused on combating corruption in Africa.

President Mnangagwa said all stakeholders, including governments, the private sector and civil society, should play their part to curb corruption.

The discussion was led Nigerian President Muhammadu Buhari, who is the leader of the AU theme for 2018.
“On assumption of office, I gave moratorium of three months to those who have taken money from Zimbabwe to bring it back. In three months so far I have got the feedback of US$850 million that has been brought back,” said President Mnangagwa.

“Upon assumption of the Presidency of my country, my Government prioritised the fight against corruption. To this end, we have established Special Anti-Corruption Courts, required Cabinet members to declare their assets, established a new Anti-Corruption Prosecution Unit within my Office and enacted the Public Entities Corporate Governance Act. The most enduring way of fighting corruption, however, is to inculcate values which are averse to corruption within our societies.

“Corruption networks are becoming more sophisticated, hence the need to enhance information sharing amongst member-states’ law enforcement agencies and related institutions on the continent and beyond.”

President Mnangagwa said this year’s summit theme was a major step towards unpacking the enigma of a rich African continent, yet inhabited by poor people.
He described corruption as an enemy of development and progress.

“Our theme is a bold statement that we, as African leaders, are determined to rid the cancer affecting our continent,” said President Mnangagwa.

“Corruption is an enemy of development and progress, hence this fight must be part of a broader commitment to good governance and sustainable development. Equally, we must build strong and robust institutions that ensure that all our assets and natural resources benefit many rather than line the pockets of a few. “

President Mnangagwa said while the African Union Advisory Board which came about as a result of the ratification of the Convention on Preventing and Combating Corruption by 40 countries including Zimbabwe in 2003, had made progress, its operations had been handicapped by limited resources.

He said the board and other organs of the AU should be above reproach.
“Zimbabwe signed and domesticated Sadc, AU and UN legal instruments against the scourge of corruption,” said President Mnangagwa.

“We also honour our reporting obligations, including to the African Union Advisory Board on Corruption.”
President Mnangagwa had since published a list with 1 844 externalisers composed of looters in mining, agriculture, manufacturing and cross border freight.

The Summit is themed: “Winning the fight against corruption: a sustainable path to Africa’s transformation.”
Several African leaders made their submissions focusing on measures they were implementing to fight corruption in their respective countries.

In the case of South Africa, President Cyril Ramaphosa said: “As countries we need to consistently strive to eradicate this problem for our development. If corruption is not addressed it will continue to impede our goals of improving the lives of our people. In simple terms corruption destroys life. Corruption is not a unique African problem but a global challenge.

“In order for us to rid our countries and the continent of the scourge of corruption we have to work together with international partners and ensure that our resources return to ourselves. South Africa has taken bold steps to fight corruption. We have well developed anti-corruption registration and institutions and we have ratified a number of regional and continental legal instruments.”

The President of Ghana Nana Akufo-Ado said each time government wanted to prosecute a high profile figure of corruption it was accused of a witch hunt.

He said they were implementing several measures to address the corruption in Ghana.