At least 54 percent of post-graduate students at the University of Zimbabwe (UZ) are taking up studies in science programmes, a development which is expected to shore up human capital in highly critical areas that have skills gaps.

This comes as the institution has begun the construction of its Quinary Hospital, on which President Mnangagwa laid the foundation stone yesterday after the 40th graduation ceremony.

The ceremony saw only students with distinctions and those receiving PhDs attending physically while the rest followed proceedings virtually in observance of Covid-19 protocols.

UZ Vice Chancellor, Professor Paul Mapfumo, said the university’s thrust to promote science programmes was beginning to bear fruit as the past two years had witnessed a consistent trend of more science post-graduates.

“This demonstrates that the university is slowly balancing science and technology training towards addressing areas of critical skills shortage in the country,” he said.

Prof Mapfumo said among the graduands was the first group of 14 Aeronomic engineers who were part of those who took up newly-introduced programmes that include Space Science and new areas in computer engineering and telecommunications.

There was also the first group of medical doctors who graduated from the Midlands State University (MSU)’s Faculty of Health Sciences under the mentorship of the UZ.

Of the 5 483 students capped by the President Mnangagwa yesterday, female students made up 53 percent, a trend which the university has been recording over the past two years.

Prof Mapfumo said in line with instilling the culture of local production, UZ had filed 81 patents this year alone and produced 51 start-up companies that had been registered.

He said 137 patents had been filed since 2019, signifying “a new attitude and consciousness towards production and monetisation of intellectual property”.

Four graduands received the Dr Emmerson Dambudzo Mnangagwa Chancellor’s award, while several others were recipients of the Zimbabwe Manpower Development Fund (Zimdef) Trust award and winners of the Vice Chancellor’s award tailored to uplift the standard of competition in the students and scholarship.

Speaking after laying the foundation rock at the Quinary Hospital, President Mnangagwa said UZ had proven that it was possible to build a research-innovation industrialisation ecosystem that yields tangible goods and services, as well as economic opportunities to change peoples’ lives.

“The establishment of a super specialist Quinary Hospital at this Industrial Park will provide an additional home for many medical advancements and innovations,” said the President.

“A drastic reduction of people seeking treatment in foreign countries is expected, with the accompanying savings on our foreign currency medical services bill.

“I call upon the Ministry of Health and Child Care and the various agencies and departments under the Ministry, to support and take an active interest in the developments within our universities, which relate to our health services sector.”

A quinary hospital offers the highest specialised healthcare and the UZ facility is expected to also train specialist health personnel.

On completion by 2025, the Quinary Hospital is expected to be one of the best specialist facilities in Africa and the world.

The President described the university’s curriculum review process as a commendable move as the new degree programmes in the Faculty of Medicine and Health Sciences would underpin the training of highly specialised health practitioners, resulting in improved quality and affordability of healthcare in Zimbabwe.

He said institution’s flagship Graduate Innovator Programme, stood as a beacon of the success of the Education 5.0 model.

“There is need to support the creativity and innovation of our young students, through protection of their intellectual property. 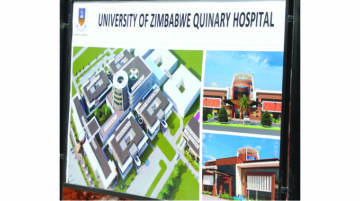 “The emerging group of technopreneurs and young industrialists must take advantage of Zimbabwe’s membership to intellectual property organisations, as well as the conventions and protocols our country has ratified.

“These include the African Regional Intellectual Property Organisation, whose 18th Session of the Council of Ministers, I officially opened yesterday (Thursday) in the City of Victoria Falls,” he said.

“As an institution of higher learning, you are challenged to create an inter-disciplinary, inter-faculty and cross-cutting ecosystem within and across institutions, towards sustainable new businesses and    industries.

“This must entail linking our innovative young boys and girls to Venture Capital Funds and guiding them through the processes and procedures required for ultimately listing on our equities markets,” added the President.

On its part, the Government would remain committed to support all facets of higher learning to accelerate the envisaged results of Education 5.0, said President Mnangagwa.

The President also applauded the launch of the Education 5.0 Journal titled, “Kugona-Ukwenelisa: Journal of Science, Technology and Entrepreneurial Ecosystems Development”, premised on the UZ’s new-found philosophy of “Kuziva, Kugona neKuita”.

He said this attested to the UZ’s recognition of the importance of published research to advance the intricate co-relation between nature, intellectual and technological capabilities, and the needs of societies.