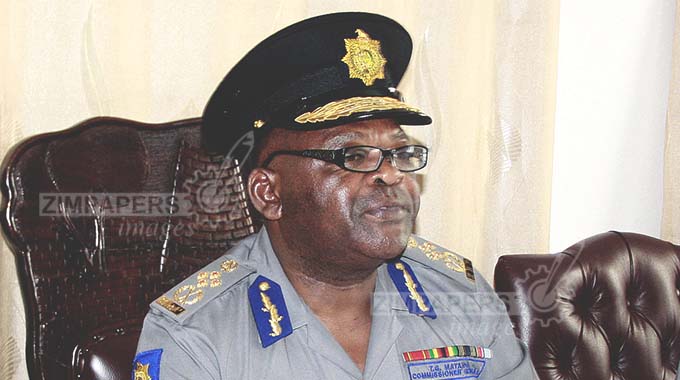 Freeman Razemba Crime Reporter
Police Commissioner-General Godwin Matanga yesterday said officers who have not served for at least 10 years at an operational police station in the country should not be allowed to train recruits at any of the force’s training depots.

This comes after the police chief expressed concern over the level of corruption and indiscipline manifesting among junior officers and the quality of training offered at police depots.

“I would like to express my disgust for acts of corruption and indiscipline among police officers,” Comm-Gen Matanga said while addressing officers at Morris Depot in Harare. “We must all fight the scourge of corruption, which continues to threaten our social fabric. It is even worse if perpetrated by police officers.

“Policing is a calling and people look up to us for the protection of their property. Police officers are the custodians of the law and it is quite appalling to see the same people who are supposed to exhibit moral exactitude indulging in morally reprehensible acts.”

Comm-Gen Matanga said training instructors should possess the requisite experience that enabled them to prepare trainees to become police officers who were proficient in the execution of their policing tasks in all diverse environments and circumstances.

“Of late, there has been growing concern over the level of indiscipline manifesting in most of the junior members of the organisation,” he said. “This has prompted some, both within and without the organisation, to query the quality of training being rendered at police depots.

“The most inquisitive have even gone to question the calibre of the trainers themselves. It is for this reason that I would like to make it explicitly clear that anyone who has not served at an operational station for at least 10 years should never be allowed to take up any instructional post at any of our initial training depots.”

Comm-Gen Matanga said instructors ought to be repositories of policing experience and not those who strut about with an air of importance deriving from bookish policing, yet very low on practical experience.

“Some of the instructors are so oblivious of the basics of policing and the expected police decorum,” he said. “This explains why we have so many junior members moving around exhibiting shameful conduct like eating and smoking in public while in police uniform, moving around with hands in pockets, or carrying loaded bags.

“Some junior female police officers like weird hairstyles and as a result, the police cap ends up in awkward position. That is improper and such conduct must end now.”

On elections, Comm-Gen Matanga reiterated that the force had a role to play in the creation of a conducive environment for the holding of free, fair, peaceful, credible and transparent elections.

He said pocket-sized handbooks, which outline the force’s roles as provided by the relevant laws, had been provided for the officers who will be deployed.

The handbooks will be distributed early to allow all members sufficient time to internalise the contents, the police chief said.