The MDC condemns the unrepentant persecution of senior leaders in various Provinces. The fast tracked trial and conviction of Tonderai Samhu in Mashonaland Central is against the principles of natural justice. He was sentenced to six years in prison on trumped up charges of barricading roads. 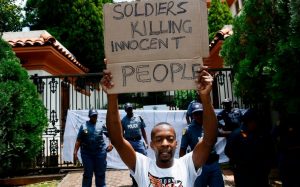 Denial of fair trials for citizens is a Constitutional violation.

The party is also concerned by the abduction and subsequent dumping of the Deputy Mayor of Chitungwiza, Jabulani Mtunzi, a senior Provincial member, at Makoni Police station with a swollen face.

If the state can abduct high profile individuals like him then the ordinary Zimbabweans may just as well be buried alive.

Evidence of soldiers terrorising people in the several neighborhoods continue to surface. Security forces continue to breach the conduct outlined in section 208 of the Constitution.

We appeal to the international Community to scale up efforts to stop the killings of citizens.

The MDC demands the urgent setting up of an independent complains mechanism set out in section 210 of the Constitution.