Mliswa threatens to mobilise public to beat up MPs 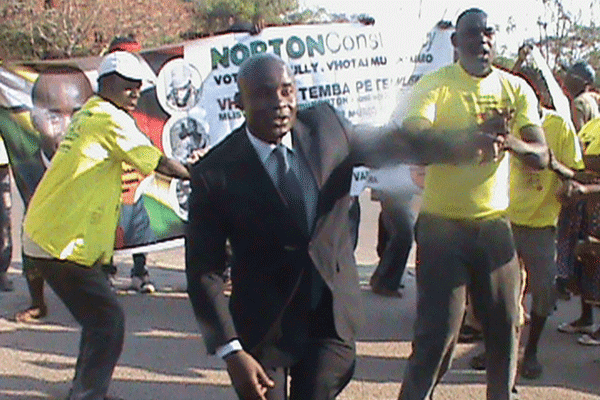 NORTON legislator Themba Mliswa (Independent) yesterday threatened to mobilise the public through social media to protest in Parliament and beat up legislators for wasting taxpayers money after Zanu PF and MDC MPs continued politicking over an investment law.

The melee started during discussions of the Zimbabwe Investment and Development Agency Bill whose objective is to provide for the promotion, entry, protection and facilitation of investment in the country.

Dzivarasekwa MP Edwin Mushoriwa (MDC Alliance) then suggested that Justice minister Ziyambi Ziyambi must include an amendment in clause 4 of the Bill to ensure the principle of devolution of power is respected.

All hell broke loose when Ziyambi refused to take any suggestions on the Bill from opposition MPs saying that he will not recognise them until they recognised President Emmerson Mnangagwa.

Thereafter MPs from Zanu PF and the MDC began to hurl insults at each other in full view of Vice-President Kembo Mohadi who just sat stone-faced as he watched the fracas that went on for almost two hours.

Binga North MP Prince Dubeko Sibanda (MDC Alliance) then retaliated by saying that if Ziyambi continued to say that he will not recognise opposition MPs then the opposition will not allow him to also speak in Parliament.

Sibanda was later chucked out of the House by Acting Speaker of the National Assembly William Mutomba.

Seeing that politicking in Parliament was now disrupting important business of crafting Bills, Mliswa then threatened to mobilise Zimbabweans to beat up MPs for wasting taxpayers’ money.

“I am totally ashamed that we have a VP in this House and my heart bleeds that we have spent a long time arguing and politicking instead of uniting for the common goal of the ordinary person,” Mliswa said.

“I do not belong to any political party, but we need to address this impasse and we need the Speaker of the National Assembly Jacob Mudenda to address it.”

Mliswa continued: “You behave like hooligans and I will end up mobilising Zimbabweans online to come to Parliament to stage a demonstration and beat you all up because you are a waste of resources and taxpayers’ money.”

MPs now get $700 allowances per sitting. After Mliswa’s threats there was calm in the House and Ziyambi and the MPs continued to craft the ZIDA Bill without further politicking.