President Emmerson Mnangagwa’s government has not learnt much from the August 2018 post-election violence, the Zimbabwe HRC says 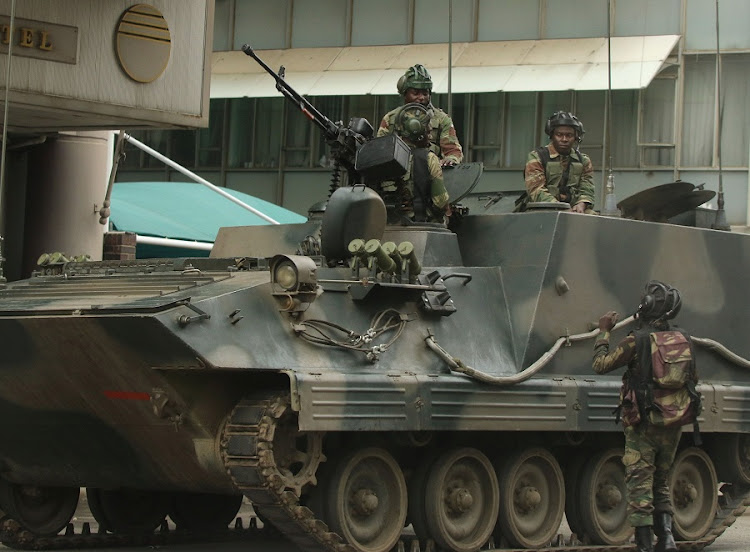 Soldiers are seen on the armoured vehicle outside the parliament in Harare, Zimbabwe. Picture: REUTERS/PHILIMON BULAWAYO

The commission said more people had died during last week’s protests than during August’s army response that forced Mnangagwa to appoint a commission of inquiry headed by former South African president Kgalema Motlanthe.

The government has given an official death toll of three, including a police officer.

Among other things Motlanthe’s commission — widely regarded as a whitewash by the opposition and some civic organisations — recommended was that the army be not involved in the country’s politics.

Zimbabwe was plunged into violent and angry protests in January 2019 after president Emmerson Mnangagwa announced steep fuel price increases, making Zimbabwe the country with the most expensive fuel in the world, according to GlobalPetrolPrices.com.

“The commission remains concerned by the use of the military to control law and order in the country. After the events of August 1 2018, it was to be expected that the country would have learnt something and would in future do things differently. From reports received to date, indications are that more citizens have died during the current protests than those who died during the August 1 2018 protests.

“It is therefore disturbing to note that the deployment of the army to quell civil disturbances leads to loss of lives and serious bodily injuries and other human rights violations yet government continues to make such deployments.”

ZHRC accused the army and the police of using excessive force, including military-style torture of victims.

“The findings reveal that in the aftermath of the January 14 disturbances, armed and uniformed members of the Zimbabwe national army and the Zimbabwe republic police instigated systematic torture. The torture was organised in that it targeted men who stay near areas where barricades had been placed and near areas that were torched by protesters or looters

“In some instances, it was noted that those aligned to the Movement for Democratic Change were also specifically targeted, for example, MPs, councillors’ and other active members.

“Torture was perpetrated through beating the men with baton sticks on their backs while they lay on the ground including falanga, that is beating under the feet and beating with open hands.

“The amount of force evidenced by the injuries sustained by some of the complainants that were interviewed and the deaths that occurred which were supported by medical records reveal a case of police brutality.”

The ZHRC also disclosed that children were not spared in the crackdown by the security forces.

On Tuesday, Mnangagwa said an investigation would be conducted against security officers who committed the atrocities.

The President who arrived in Harare Monday evening after cancelling a planned appearance at this week’s World Economic Forum in Switzerland to attend to the crisis at home in the wake of global criticism, promised that “heads would roll”.

He sharply criticised the protests and called for national dialogue over the crisis.

In a statement to Business Day on Tuesday, opposition leader Nelson Chamisa called for an end to the army crackdown and the release of victims after 700 people, including opposition parliamentarians and popular activist Evan Mawarire were arrested.

“We have long offered a hand to resolve our national challenges. Regrettably this hand has been spurned and mocked. It is sad that some seem to have reluctantly come to this realisation following the loss of lives. It does not have to be that way, but such is the price of arrogance,” Chamisa said.