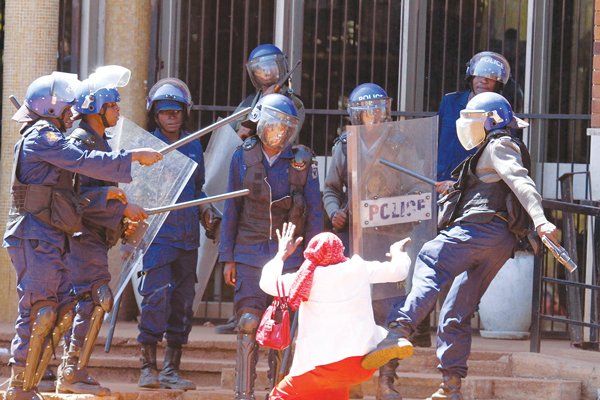 HOME Affairs minister Obert Mpofu has threatened a crackdown on any street protests amid fears in government of a possible uprising by MDC Alliance supporters over an unfavourable Constitutional Court (ConCourt) ruling which affirmed President Emmerson Mnangagwa’s election.

MDC Alliance leader Nelson Chamisa challenged Mnangagwa’s wafer-thin victory in the July 30 presidential election but the court threw it out with costs for lack of concrete evidence.
Mpofu’s ominous warning comes as the Zimbabwe Republic Police on Wednesday put its paramilitary wing, the Support Unit, on high alert to thwart any demonstration.

The move coincided with an MDC-T crisis meeting on Wednesday, where officials pondered the way forward after the court loss. The party resolved to consult Zimbabweans across the country on the way forward with regards the “stolen” election.

The MDC national council resolved it would then “embark on a national programme of action resulting from the outreach”.

Chamisa rejected the ConCourt ruling, insisting he won the presidential election with 2,6 million votes. The Zimbabwe Electoral Commission (Zec), however, announced that Mnangagwa won the election after garnering 50,8%, while Chamisa got 44,3%. Zec later reduced Mnangagwa’s margin to 50,67%.

Asked about the government stance on possible protests, Mpofu said: “We won’t allow that. I mean if there are people who are planning to disrupt our peace that is unacceptable.
“If they clear their demonstrations with the police, there is no problem. But if they are unilateral, we are not going to allow that. We are appealing to our people to be peaceful in whatever they want to do, especially when it comes to political frustrations. They should do it constitutionally in a manner that is not disruptive.”

Sources said police officers attached to the Support Unit, which deals with riots, had been directed to report to their respective camps and be on high alert.

“They are anticipating demonstrations from the MDC Alliance following the ConCourt ruling. Yesterday (Wednesday) they told us to be on standby and nothing has changed,” a police officer revealed.
Police spokesperson Charity Charamba said she was unaware of the directive.

“I wouldn’t know about any memo, but if it’s there, it’s meant for police. Police can issue memos internally,” Charamba said.

“There are other means to resolve this dispute that include demonstrations, but the MDC wants to make it clear that it will act within the confines of the law,” said Mwonzora.