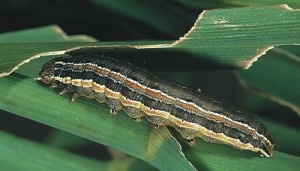 The fall armyworm was first detected in Africa in early 2016 and is now present in 22 African countries including Zimbabwe.

THE Food and Agriculture Organisation is working on a programme that will equip farmers across Africa with knowledge to fight the fall armyworm.
The fall armyworm was first detected in Africa early last year, and is now present in 22 African countries, including Zimbabwe.

FAO held a workshop in Accra, Ghana last week to develop a field curriculum for the fall armyworm and integrated pest management for use by trained facilitators in ongoing farmer field schools across Africa.
It sought to build the capacity of participating senior trainers and develop a strategic plan for the roll-out of the fall armyworm management response in Africa through the field schools and the training of extension workers.

FAO said that ecological pest management strategies need to be put in place to avoid significant damages to agriculture and food security in those regions and to reduce the risk of overuse of chemical pesticides.

“Due to inadequate knowledge of this new pest, governments of affected countries launched massive pesticide operations, incurring huge costs in an attempt to contain the pest.
“Likewise desperate farmers applied different types of pesticides and unorthodox measures with little guidance on appropriateness, human safety and environmental considerations. The fall armyworm is extremely difficult and expensive to manage,” Phiri said.

FAO played a central role in facilitating a coordinated response to the fall armyworm outbreak in Africa.
The United Nations agency has identified medium and short-term actions to build an integrated response including monitoring and early warning systems, mass education campaigns, farmer training on use of an agro-ecosystem approach through farmer field schools, and impact assessment.
The worm is native to the Americas, where farmers and researchers have been managing and studying it for many years.

FAO assembled more than 10 experts from Brazil, Argentina, Mexico, the United States of America, United Kingdom and a number of African experts, to present and discuss management practices and recommendations for Africa.

The fall armyworm is an insect-pest which causes major damage to more than 80 crop species, including economically important crops such as maize, rice, sorghum, wheat, sugarcane, several other vegetable crops and cotton.

The pest’s ability to feed on a range of crop species means that smallholder farming systems in Africa, which are based on intercropping, are particularly vulnerable.
The rapid damage and migratory capacity of the pest, combined with its capacity to reproduce quickly in the right environmental conditions and its ability to rapidly evolve resistance to synthetic pesticides, has increased the region’s vulnerability.

But the Zimbabwe government said that it had the pest under control.
“Fall armyworm in Zimbabwe has been kept under control due to training and awareness campaigns,” the Minister of Agriculture, Mechanisation and Irrigation Development, Joseph Made, said.
Phiri warned against over-reliance on pesticides.

“We need to be wary of over-reliance on pesticides as a mechanism for pest control and plant protection. Pesticides disrupt the natural crop ecosystem balance, thereby causing outbreaks of secondary pests; particularly through elimination of natural enemies.

“They also contribute to a vicious cycle of resistance of pests to pesticides. Excessive use of pesticides exposes farmers to health risks and has negative consequences on the environment,” he said.