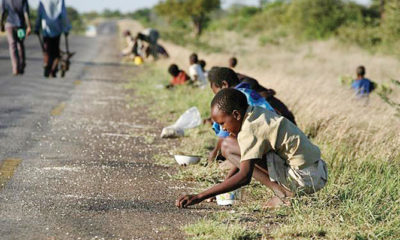 HARARE, Zimbabwe — Zimbabwe, where millions of people already face acute hunger, could sink deeper into crisis as the coronavirus pandemic takes a toll on the country’s troubled economy and food supply, United Nations agencies say in a new report.

The southern African nation is “one of the world’s top global food crises,” the U.N. children’s agency, the World Food Program and the Food and Agriculture Organization said in the report released Monday.

More than 4 million rural people, about a third of Zimbabwe’s population, “are in need of urgent action,” the report says.

More than half of Zimbabwe’s 15 million people need food assistance due to droughts, floods and worsening economic problems, according to WFP, which was already assisting about 3.5 million people well before the pandemic.

Zimbabwe’s economy has imploded in the past year, with annual inflation rising to more than 600%. Shortages of cash, gas, clean water, electricity and staple foods highlight the once prosperous country’s problems.

While the country has recorded just over 30 coronavirus cases, the pandemic has taken a huge toll on the largely informal economy. A five-week lockdown that ends next week has left most urban residents who survive in the informal sector stranded with no source of income.

The measures to contain the virus’ spread “have the potential to impact negatively on the food system in Zimbabwe, such as through restricted access to markets by both farmers and consumers, and a glut of perishable nutritious foods like fruits and vegetables,” FAO representative Jocelyn Brown Hall said.

Children have not been spared in a country where poor diet is contributing to malnutrition, the report says.