NUST to assist with DNA tests for inferno victims

Source: NUST to assist with DNA tests for inferno victims | The Herald November 17, 2018 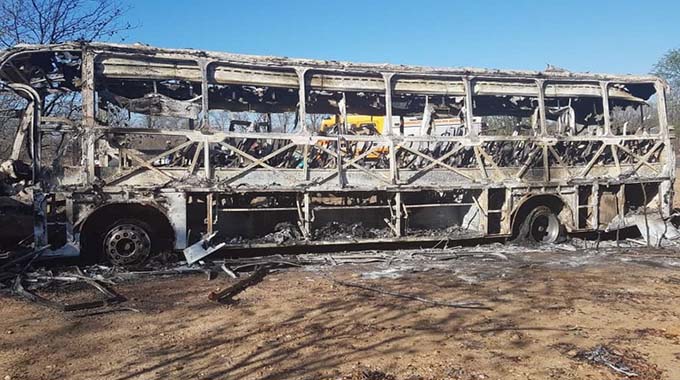 The shell of the vehicle yesterday morning. Forty-two people were killed, while 26 others escaped with various degrees of injuries

Bulawayo Bureau
GOVERNMENT will undertake DNA tests to identify victims of the Gwanda accident who were burnt beyond recognition on Thursday night. The National University of Science and Technology (Nust)’s Applied Genetic Testing Centre (AGTC), which usually provides the DNA testing services, said it is ready to assist.

Forty-two people died after an explosion suspected to have been caused by a gas cylinder on a Musina-bound bus near West Nicholson. Some of the victims were burnt beyond recognition.

In an interview yesterday, Civil Protection Unit director Mr Nathan Nkomo said for those who were burnt beyond recognition, insurance companies will pay for the scientific identification of the victims. Government usually engages Nust’s AGTC to conduct the DNA tests in such disasters.

Mr Nkomo said Government was concerned at the increase in the number of fatal road accidents involving buses.

“We are really disturbed by the increase in road accidents claiming many lives,” he said. “Only a week ago, another accident involving two buses that occurred just outside Rusape claimed 46 lives.

“We are told more than 30 people were killed in this West Nicholson accident in Matabeleland South province.”

AGTC director Mr Zephaniah Dhlamini said Government was yet to contact the university regarding the DNA services for the West Nicholson bus accident victims.

“We are always ready to assist when such disasters occur because we have everything needed to do the job,” he said.

“In cases like this we work with the Government pathologist. What normally happens is that the pathologist identifies whether the deceased is a male or female and estimate the body’s age before we conduct the tests.”