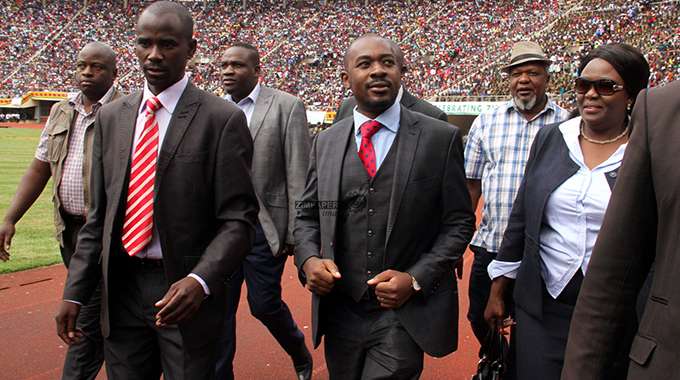 MDC-T president Nelson Chamisa arrives at the NSS following President Mnangagwa’s invite to all political parties to attend this important celebration of the country’s independence.

Paidamoyo Chipunza and Zvamaida Murwira
Political parties, diplomats and traditional leaders yesterday hailed Zimbabwe and President Mnangagwa for cherishing the ethos of the liberation struggle that saw the country attaining its independence. Chiefs Council President Fortune Charumbira said people had lost hope in the previous Government led by former President Mugabe as it rendered previous celebrations a mere formality instead of celebrating the attainment of independence as Zimbabweans.

“We had travelled 37 years with former President Mugabe until recently when people started feeling as if they were still under the white colonial rule and took to the streets,” he said.

“Those national youth interface rallies brought things to a head as respected cadres like vaMnangagwa were being undressed in public. Corruption was rife with perpetrators being protected.”

“This 38th birthday of Zimbabwe is a milestone in the history of your country because Zimbabwe, especially the military, sent a lesson to the entire world that whoever holds power or guns must not use them against innocent people, but use that power for the good of the people,” he said.

“This country is facing huge challenges and it needs to introduce significant reforms both in the economic and political fields and the re-engagement with the bloc is linked to effective implementation of those reforms because what we want is to bring this country back on sustainable growth to the benefit of all Zimbabweans,” said Mr Van Damme

MDC-T president Mr Nelson Chamisa hailed President Mnangagwa’s speech, saying it was national and inclusive.
“National days should be unifying and not partisan,” he said.

“They are supposed to be days of togetherness because no individual or political party is bigger than these national days, which is why we applaud President Mnangagwa’s speech.

“Our only problem is that we urge him to expedite reforms as we approach the elections.
“We must reflect what Zimbabwe has gone through collectively. President Mnangagwa’s speech was to a large extent inclusive because it reckoned the diversity of political parties.”