Return of the generals: Reflections on the military coups in Zimbabwe and Sudan

“The question for Sudan, as it was for Zimbabwe, is to what extent any substantive and genuine reforms will be realised if the military entrenches itself within the corridors of executive power,” writes David Kiwuwa. The Africa Portal is a research repository and an expert analysis hub on African affairs.

Source: Return of the generals: Reflections on the military coups in Zimbabwe and Sudan – Africa Portal 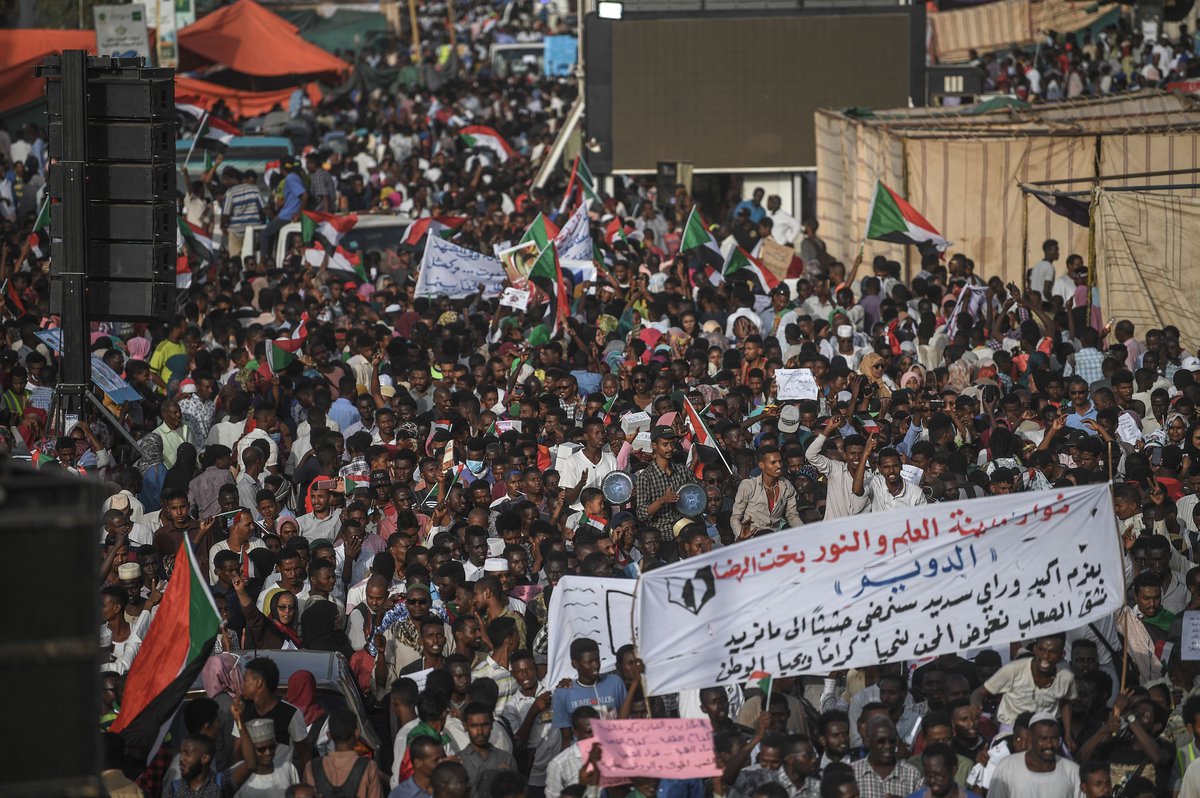 (Sudanese protesters, from the city of Kassala, arrive to join the sit-in outside the army headquarters in the capital Khartoum on 27 April 2019. A joint committee representing Sudan’s military leadership and protesters is to hold its first meeting this week to discuss their demand for civilian rule, the leading protest group said. – Ozan Kose/AFP/Getty Images)

In the 1970s and 1980s, military coups in Africa had become so frequent that they were arguably a distinct mode of political governance. A legacy of post-colonial state decay and incomplete institutional building had precipitated high levels of military interventionism. Oftentimes, the rationale for such interventionism included to maintain military autonomy or strategic interests, prevention of encroachment on military prerogatives (such as military spending), economic crises or political dysfunctionality.

The 1990s, however, saw a fundamental change with democratisation and the military retreating back to the barracks. On a global scale, this was largely in response to the end of the politics of the Cold War and international donor pressure for increased economic liberalisation and political reform. Internally, it was as a result of the transformative reawakening of a vibrant civil society.

The 2000s have, however, witnessed a resurgence of military coups on the continent, albeit as this form of transfer of power continues to decline in Africa. Since 2010, there have been 26 coup attempts largely driven by unfulfilled promise, economic malaise increased political persecution and long term incumbency

Zimbabwe and Sudan have recently witnessed successful military interventions, although in both cases each nation’s president was allegedly encouraged to resign. These interventions, or so called “non-coups”, came amidst pressures and tensions for leadership transition in both countries as Zimbabwe’s 37 years of Robert Mugabe’s rule and Sudan’s 30 years of Omar al-Bashir’s had begun to reveal each regime’s wear and tear. Economic crises, political violence and international isolation had all become characteristic of both regimes.

“The subsequent appointments of former military officers [in Zimbabwe] to the posts of Vice President, Minister of Agriculture, Minister of Foreign Affairs and the National Parks Authority – among other positions – undoubtedly marked the return of the generals to the centre of governance.”

It should also be remembered that these regimes were born out of violent struggle. Mugabe’s was an independence movement while al-Bashir’s was a coup d’état. Both relied notoriously on threats, or application of violence, to retain power with the military or state security organs as the enforcers thereof. Ironically, to realise regime change, their militaries went through a kind of “role expansion” where they took it upon themselves to correct structural political and economic weaknesses; areas presumably seen as outside military competencies.

Military intervention comes in different forms, according to intent. Looking at Zimbabwe, this was a case of an army-party intervention, as Zimbabwe’s military leadership was – in some way – an extension of the dominant party. It was generally claimed that the Zimbabwe coup was carried out to get rid of criminals and subversive elements around the president. But the real story was clearly in-party factional fighting for power post-Mugabe. The camp that eventually prevailed was one supported by the military establishment ensuring the preservation of their vested interests. The subsequent appointments of former military officers to the posts of Vice President, Minister of Agriculture, Minister of Foreign Affairs and the National Parks Authority – among other positions – undoubtedly marked the return of the generals to the centre of governance.

“All signs, so far, point to a central role of the military in the transitional phase and beyond.”

The Sudan military intervention, like Zimbabwe was, simply, a ‘guardian coup’. The military hierarchy, itself also the guardian of the dominant party in power, is being accused of continuation of the status quo, but in ‘disguise’. While the military adopted a cautious approach to the initial nationwide protests, their persistence called for a recalibration of strategy. Eventually, the military chief signalled a game-changing but self-serving shift which saw the military side with the people to acknowledge their genuine grievances against the regime. The envisaged transitional set-up is likely to be a civilian-military coalition as there is no sign that the military is willing to fully cede their newfound power to the civilians. All signs, so far, point to a central role of the military in the transitional phase and beyond.

Regional perspective and the position of the AU

The African Union plays an important role in intervening in any incidences of unconstitutional change of power within the continent’s member states. To that extent, condemnation and suspension from the body are now a common position for the continental body. Its Constitutive Act

has, among its principles, “condemnation and rejection of unconstitutional changes of government”. In this vein, the AU has come down hard on Mali, Burkina Faso, Niger, Gabon and Guinea among others.

Consequently, the AU has been the only body in the international community to condemn the military takeover of power in Sudan. Initially, its peace and security council urged a quick return to civilian governance lest Sudan be suspended from the Union within 15 days of the coup.  This has since been extended to three months to allow for further progress. In Zimbabwe, the then head of the AU, Alpha Condé of Guinea, condemned what he termed as soldiers trying to take over power forcefully.  However, the official position was more fluid and ultimately, the AU did not release an official communique to this effect, unlike in Sudan. This was informed by the “uncertainty” if indeed what had transpired was a coup.

Regional blocs such as the Southern African Development Community (SADC) and the Economic Community of West African States (ECOWAS) have also demonstrated similar positions as the AU with respect to the role and intervention of the military in settling governance questions. Their members, being signatories to the African Charter on Democracy, Elections, and Governance, have specifically rejected any role of the military in change of power.

What lies ahead for Sudan: Lessons from Zimbabwe

The question for Sudan, as it was for Zimbabwe, is to what extent any substantive and genuine reforms will be realised if the military entrenches itself within the corridors of executive power. Zimbabwe shows us that while the rhetoric points to widespread change and panders to popular demands and expectations, the reality couldn’t be more different. While there have been superficial changes, the substantive ones such as improvement in civil rights and individual freedoms, are yet to be seen. The current Zimbabwe regime, while elected into power in elections held last year, is still very much similar – in form – to the original military-civilian transitional outfit.

Sudan, therefore, will find that the ability to extricate the military from political governance is not as straight forward, given the long and complex enmeshing of military-party-state interests. The proposed joint council that is to form the transitional government is still work in progress with the composition and balance still in dispute. And how far the military is willing to go in purging itself without endangering its own strategic interests remains unknown.

What is likely to happen is the establishment of a fusionist regime which is an amalgam of military, technocratic, corporatists and bureaucratic elites. Such a regime would have military-civilian cooperation as a distinct feature, specifically because it would emerge out of compromise. This means that democratic transition will be a drawn-out process and a steep learning curve at best.

It is inescapable that for the foreseeable future, the military will continue to have an oversized role in the politics of African states bereft of robust democratic norms. Whether this role will be as a guarantor of constitutional order or as a detractor from transformative progress will largely depend on the history and context of each state. So far, however, nations such as Zimbabwe and Sudan offer a sobering image of what lies ahead.

The opinions expressed in this article are those of the author(s) and do not necessarily reflect the views of SAIIA or CIGI.