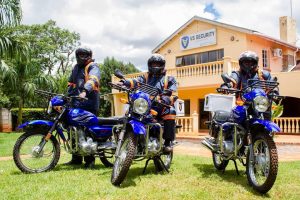 It is with grave concern that the Zimbabwe Network for Social Justice (ZimJustice) notes the ever-increasing heartless, callous and downright wicked behaviour by some security firms, as they fail to pay their employees – who have served and earned these same companies for many years.

ZimJustice has over the past months received countless reports from both current and retrenched workers, who have not been paid their salaries and terminal benefits by companies that they helped earn so much money over the course of time – most of whom having to risk their lives, as they guarded very dangerous and volatile establishments, prone to armed robbers, with nothing but a stick to protect themselves with.

I have managed to contact several of these security companies, and what they told me left me with a very bitter taste in my mouth, as their repeated excuses of not having money to pay their workers – as they (security firms) are also owed by establishments they offered protection services to.

Most notable of these security companies are Guardian Security, and Velyscin (VS) Security Company – both in Harare – whose claim of not having any money to pay their retrenched workers leaves a lot to be desired.

A visit to Guardian Security by ZimJustice was very painful – nearly driving me to tears – as I witnessed bouncers at the head offices’ gate, hired by the company just to keep out disgruntled workers, who were merely demanding what was rightfully owed them.

I had a torrid time just to enter the company’s premises, as the bouncers overzealously tried to deny me entry, as they suspected that I was one of the workers – although, they finally permitted me after identifying myself.

The question that was utmost in my mind when I finally entered the offices was: how can a company operated by real human beings with a heart, treat its own employees – who had served it so diligently and helped it earn money, whilst placing their own lives at risk – as if they were dangerous criminals?

The workers I witnessed gathered outside the Guardian Security head offices were peaceful, yet only wanting to know when they would get their money – something that is within their constitution rights.

Nonetheless, they received the same lame and unprovable claim that the company had no money, and also is owed by those it offered guard duties to.
I received the same response from VS Security Company – which allegedly went further by telling its workers that it would pay them ‘when it got change’ from its receipts from those it offered guard services to.

What manner of statement is that!

Yet, according to unsubstantiated reports obtained by ZimJustice, VS Security Company is busy acquiring properties, developing its premises, and has even established a parallel security company called Stallion – which allegedly has contracts at the same companies that VS Security has!

ZimJustice has already started investigations into these claims.

However, what is most important is that an employee’s right to a fair wage is guaranteed in the country’s constitution under section 65, and we believe that every company that does not comply by this provision should be held to account.

There have been far too many reports of companies failing in their obligations to pay their employees, using the same flimsy excuse, such that it is high time our new government took decisive action.

Furthermore, some of these companies have alleged to have come up with payment plans, but what is the point of such a set-up if a worker receives $150 only after four to five months – considering the current cost of living?

ZimJustice calls upon the new government to finally show that it is different from the Robert Mugabe-era, by putting in place mechanisms that protect workers.

This entails, amongst other things, demanding, or even instituting, thorough investigations into these companies accounts, so as to establish the veracity of these claims – as we believe that such companies earn enough, but just do not want to pay.
If the legal system can demand that an unemployed father still pay some maintenance to their child, why would that same system not demand that these companies pay their workers, no matter what their real or imagined financial position is?
I know for a fact that debtors can have their properties attached so as to cover a debt, so why does it become so difficult for these companies’ properties to be attached and sold to pay workers?

Workers in Zimbabwe are arguably the most ill-treated and oppressed people on this continent, and ZimJustice urges the new government to change their plight.

For workers to go through so many obstacles, such as the National Employment Councils (NEC), labour offices and labour courts, just to obtain what one is owed, is grossly unfair.
Furthermore, these institutions have been on record for brazen corruption, as they have been routinely bribed by employers so as not to award disgruntled workers any favourable judgements.

It is much easier to obtain maintenance money, than to obtain what one has worked for for over 20 years!

The executives and management at these security companies never resign because they are being paid – and paid very well – as such, there is money.
The very fact that these companies are not shutting down, due to unprofitability, speaks volumes!

Do they even lose any sleep that their employees can not even afford to pay rent for their accommodation?

Whilst, these merciless executives feast with their families and friends, do they even take a moment to wonder what these workers, they are failing to pay, are eating?

Do they have the courage to even visit where their employees stay, just to have a better understanding of their plight?

I personally believe that these executives do not give a hoot – and just like that father who does not care about his children’s welfare – firm and decisive action needs to be taken against them.

We can not wait for them to finally miraculously grow a heart, but need to take action today!

ZimJustice stands with all the unfairly treated people of Zimbabwe, especially workers, and will spare no effort in making sure that justice is finally served.

We can never achieve a middle income economy by 2030 – no matter how many companies open their businesses in Zimbabwe – as long as those who would be employed by those companies would never be paid.

Let the new government of Zimbabwe join hands with the workers of this country in bringing justice to all – let us give to Ceasar what belongs to Ceasar!

° Tendai Ruben Mbofana is a social justice activist, writer, author, and speaker. He is the Programmes Director with the Zimbabwe Network for Social Justice (ZimJustice). Please feel free call/WhatsApp: +263715667700, or (calls ONLY): +263782283975, or email: zimjustice@gmail.com. Please also ‘Like’ the ‘ZimJustice’ page on Facebook.