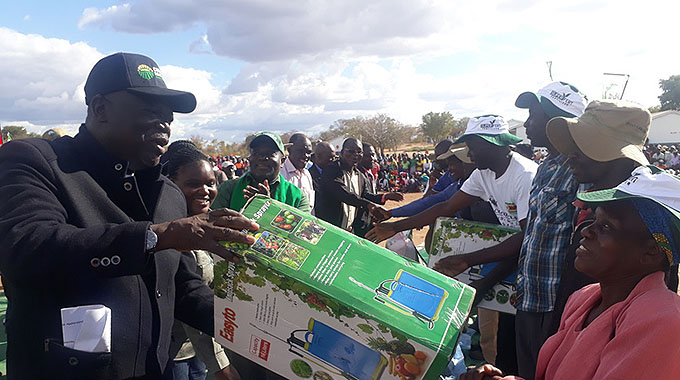 Minister Shiri hands over a knapsack sprayer to a cotton farmer in Dande, Mashonaland Central Province where the Government, through The Cotton Company of Zimbabwe launched the Presidential Inputs Scheme for this year.

Martin Kadzere Senior Business Reporter
Minister of Lands, Agriculture and Rural Resettlement Perence Shiri, has taken a swipe at the Agricultural and Marketing Authority for weak regulatory enforcement in cotton marketing, warning drastic action will be taken against further flaws.

AMA, the State regulatory board charged to ensure orderly marketing of cotton, has been widely blamed for failing to curb side marketing largely perpetrated by private firms.

Through Cotton Company of Zimbabwe, the Government has been supporting small-scale farmers with inputs in the past three years.

However, private firms have been taking advantage of weak regulations and often raided the State-funded commodity.

Despite concerns raised by various stakeholders such as farmer organisations about widespread “stealing” of the state crop, AMA’s reaction was rather lukewarm.

Private firms still operating in Zimbabwe include ETG Parrogate and Southern Cotton. Some companies such as US Cargill pulled out citing poor debt recoveries.

In an interview on the sidelines of the Presidential Inputs Scheme launch for this year in Dande on Wednesday, Minister Shiri spoke no uncertain terms that failure by AMA to restore sanity in cotton marketing would attract “obvious consequences”.

“When a farmer has been supported by a company, it makes sense for the farmer to honour his obligation especially in terms of selling the produce to the supporting company,” said Minister Shiri. “But in some cases we have farmers who run away from their obligations and end up dealing with companies, which did not sponsor them.

“We also have some companies, which are reluctant to finance farmers, and they come in; try and harvest where they did not sow. Sometimes they even afford the luxury of distorting the prices by offering better prices than financing companies.

“The reason is clear because they have no risk of making losses. They don’t have any financial costs so they can afford offering a better price and we are simply saying the marketing of cotton should be done in an orderly manner. Last season we had some companies that pretended that they were distributing inputs in January or February.

“That was very unrealistic and impractical. You cannot grow cotton at that time of the year.

“We are looking into it. There is possibility we may consider zoning whereby companies can only buy from the areas where they would have financed the crop to the magnitude of their contribution in terms of financing the crop. We hope AMA will develop that concept so as to sanitise the marketing environment,” he added.

Asked what action would government take against AMA to restore sanity, the minister responded: “They (AMA) will be told what to do and they shall do it. If they don’t, then whose interest will they be serving? Do they have other masters who tell them what to do? (As Government), we come up with policy positions and they should implement that.

“If they fail to implement or do otherwise then obviously the consequences will be obvious.”

No comment could be obtained from AMA by the time of going to print yesterday.

He hinted this year’s production target in some of the areas had been achieved, but could not provide figures.

“I am happy to say that we have surpassed last year’s output and we are on course to meeting targets,” he said, adding the ultimate goal was to reach and exceed record cotton output of 352 000 tonnes in future.

The minister said the revival of the sector, which had crumbled, has created thousands of jobs, directly and indirectly. He said the programme had also uplifted livelihoods of nearly 400 000 households who had abandoned the crop mainly due to poor funding particularly by private companies whose funding schemes were exploitative.

Minister Shiri said the inputs were being distributed on non-partisan basis as they were meant to benefit people regardless of their political affiliation.

“Let me say these inputs are from the President, not from any political party,” said the Minister.

“So even members of MDC, NPF and Zanu PF or any political party are eligible to benefit.”

The timely distribution of inputs, including seeds, basal and top dressing fertiliser and chemicals will help farmer to plant on time, which improve yield capacity.

Cottco chief executive Mr Pious Manamike, said the company would ensure that all farmers would have received inputs before the onset of the rains.

The event in Dande was part of a series of inputs launch programmes that Cottco has lined up. Similar events have already been held in Muzarabani and in Mushumbi Pools.