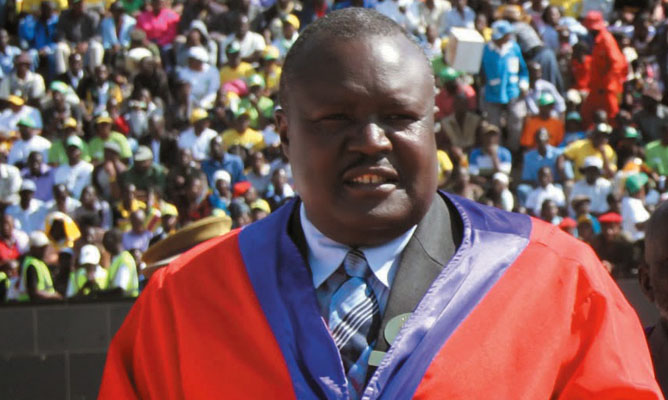 Chiefs’ Council president Fortune Charumbira on Saturday urged his subjects in Masvingo to shun political violence ahead of the 2023 harmonised elections.

He was speaking at the burial of 85-year-old Esther Sinauta Chifamba, mother of MDC Alliance Masvingo West treasurer, Pedzisa Chifamba.

“Political parties come and go but our relationship as a people will remain forever. Every person must be allowed to exercise his or her democratic right to campaign or vote for a political party of choice,” said Charumbira, who has a pending court case for openly campaigning for the ruling Zanu PF party in the run-up to the 2018 elections.

Although he was sued by Zesn and ordered to publicly apologise for his remarks, Charumbira is yet to do so and now faces a contempt of court charge.

“We are relatives in this community, therefore, those who come to campaign must not leave us divided or in hatred,” he said at the weekend.

“We know that during election time political parties come with vote buying and empty promises. That should not divide us. Each person should vote for a party of his or her own choice.”

The traditional leader went on to tell mourners that elected parliamentarians were usually friends and business partners, but ordinary supporters fought, maimed or killed each other.

“I know Mharadza, Chitando and Shoko. We were together at Parliament. You can ask them. They were sharing the same tables during lunch with Zanu PF MPs, buying each other drinks, but at the grassroots you are fighting and killing each other. We must put that to a stop,” he said.

“As your chief I urge equitable distribution of food handouts regardless of political or religious affiliation.”

Mharadza thanked Charumbira for the speech and urged people to unite.

“I thank you our chief for preaching unity and I hope everyone here agrees with our traditional leader,” he said.

Masvingo West’s ward 11 has been the hotbed of political activity since the formation of the MDC in 1999.

Tichaona Chiminya, who was petrol bombed by Zanu PF supporters together with Talent Mabika on April 15, 2000, hailed from the same ward.