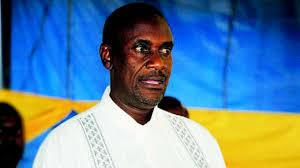 STATE Security minister Owen Ncube yesterday sensationally accused the Nelson Chamisa-led MDC Alliance of engaging in acts of sabotage and banditry by smuggling guns into the country and setting up militia groups to topple government.

Ncube told journalists that State security agents had gathered information that the opposition had connived with some disgruntled Zanu PF members to smuggle arms into the country to destabilise President Emmerson Mnangagwa’s administration.

“We are watching attempts to drive Zimbabwe into chaos. Some rogue elements among us are conniving with hostile Western governments to smuggle guns and set up so-called democratic resistance committees that are to all intents and purposes violent militia groups.” Ncube said.

“These plans are key components of operation Light House, the brainchild of Western powers, that seek to destroy the democratic foundations of Zimbabwe, make the country ungovernable and justify foreign intervention. As the security sector, we shall take concrete action to deal with such threats,” Ncube said.

On calls by pressure groups to close the Beitbridge Border Post over worsening human rights abuses in Zimbabwe, Ncube said that would be a declaration of war.

“No country in the world and no sane people would tolerate elements who openly mobilise to close their borders, particularly when COVID-19 pandemic is threatening lives and the economy.

In any country, such people would be treated as traitors. At international law, a blockade is tantamount to declaration of war,” he said.

Ncube dismissed reports of factional wars within the ruling Zanu PF as fake.

“The latest ploy of regime change has manifested itself in the opposition’s never ending calls for demonstrations aimed at diverting government from pursuing its vision 2030 agenda and stoking factionalism in Zanu PF,” Ncube said.

“While government is moving on with its reform agenda, we note the need of the MDC Alliance to reform itself into a normal opposition party that embraces outcomes of democratic processes and has the patience to wait for another opportunity to prove to voters that it deserves their trust,” Ncube said.