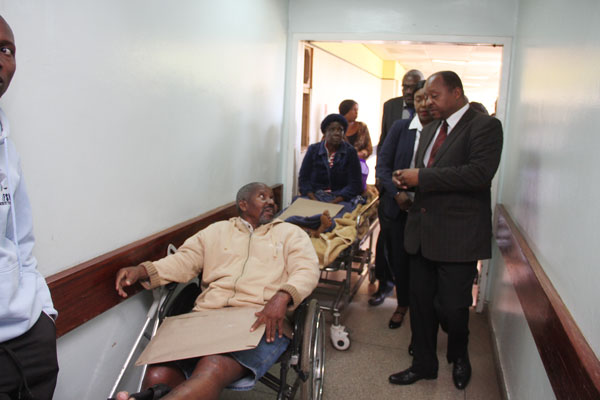 BY PHYLLIS MBANJE
The blazing mid-day sun beat mercilessly on Soka Mpande’s weathered forehead. His 73-year-old body looks worn out, buffeted by the many socio-economic torrents that the elderly face in Zimbabwe.

His knees threaten to buckle but the pride of the former primary school teacher stubbornly holds him up and he stands awkwardly just outside Parirenyatwa’s casualty section with one frail hand attempting to wade off the suffocating heat.

His other hand furtively fumbles in his trousers as he tries to secure the collecting bag that is strapped to his inner thighs and attached to a urinary catheter which assists in draining urine.

Prostate cancer has ravaged his former chubby body and reduced him to a pitiful mass.

The Standard caught up with Mpande who, despite his many woes, is quite pleasant and open about his predicament.

“The leg bag is small and so it needs to be emptied a few times in the course of the day,” explains Mpande who willingly volunteers information on his condition and how hard it has been, especially with the Covid pandemic to access healthcare.

Statistics have confirmed that older persons are the most affected and are at risk due to their underlying health conditions.

“I had come for a replacement of the catheter. It is cheaper here at Parirenyatwa since I cannot afford private health care. For something like this it would have been ideal to use private consulting rooms, but my pension has been eroded,” his voice thickens with emotion.

He is angry that after serving for so many years in the education sector, raising doctors, lawyers and accountants, he now lives like a destitute.

According to HelpAge the elderly people residing in the country, makes 4.8% of the total population.

This being the third day after, October 1, the UN International Day of Older Persons (IDOP) whose purpose is to raise awareness of the challenges and opportunities of ageing populations around the world, there is plenty evidence that this part of the community is in dire straits.

Four years ago a report from HelpAge International and Age International painted a very bleak picture of health services for older people in some three African countries including Zimbabwe.

Of note was the fact that health expenditure is well below targets set regionally, and the lack of investment resulted in limited availability, accessibility, affordability and adequacy of healthcare.

Public health facilities struggle to meet the overwhelming needs of the population and hardest hit are the elderly.

“As older people we often have to pay for health services despite policies in place which waiver the user fees,” said Mpande.

Most health institutions have been struggling with limited budgets and without grants to support the free user policies they end up charging the elderly to stay afloat.

The facilities have been run down following years of limited funding which has resulted in poor availability of equipment and medication.

Besides the actual struggle to access facilities which are mostly centralised, there are transport expenses to consider.

“I am now resident in my rural home in Dema but when I come for treatment I stay with my son in Highfield. He is not employed at the moment and to sustain his family he does odd jobs around the location.”

Mpande only has transport fare from town to Highfield and is preparing to walk into town. For a young person it may be a reasonable distance but for Mpande it is a mammoth, painful task and he apologises for having to cut the interview short so that he can walk before the sun gets hotter.

On being offered money to hike into town instead of walking, his face breaks into a smile and he profusely expresses his gratitude.

The elderly people face many problems and must do the balancing act to deal with their need for health services and other household needs.

“It breaks my heart when my wife asks for money to buy salt and I fail to provide. She is a good woman and understands but it drives a knife through my heart,” said Mpande who also says when he first started using the urinary bag after an operation at Karanda mission hospital, he experienced many embarrassing incidents.

“I would often forget to empty the bag or even secure it well and often ended up messing myself,” he says hanging his head with shame.

The fragile livelihoods, weak social security support weigh heavily on the older generation, yet the economic turmoil compounded by galloping hyperinflation continues to rob communities of the capacity to care and support older members who do not have a pension scheme.

Last year, during the United Nations International Day for Older Persons which was celebrated at Mazowe River Bridge Centre Old Peoples Home in Rushinga, there were resounding calls for a supportive ageing policy framework.

Speaking during the event, HelpAge Zimbabwe executive director and Zimbabwe Older Persons board chairperson, Priscilla Gavi reiterated her call for the government to speed up the process to ratify the Protocol to the African Charter on Human and People’s Rights on the Rights of Older Persons.

Gavi said the signing of the protocol and the formulation of older persons’ policy framework, would give effect to the aspirations of the Older Persons Act of 2012.

Despite this Act having been enacted, there has been little government budgetary allocation to implement the law.

Gavi said older people needed greater support and it was time to pay particular attention to those who are care givers of grandchildren or orphaned children.

Also speaking at the event the Public Service Labour Social Welfare minister Paul Mavhima, echoed Gavi’s sentiments and pointed out that there was great need for an enabling policy environment that ensured social inclusion of older persons.