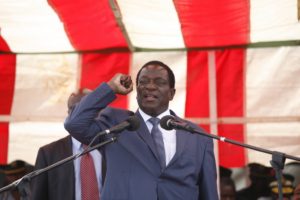 In an open letter to Zimbabwe’s president, Emmerson Mnangagwa, in the wake of his swearing-in ceremony on 26 August, Reporters Without Borders (RSF) has asked him to translate his promises of press freedom into concrete action.

The letter calls on President Mnangagwa, who often refers to “democracy,” to end the impunity that those responsible for violence against journalists and media outlets enjoyed under the regime led by his predecessor, Robert Mugabe, regarded by RSF as one of Africa’s worst predators of press freedom.

RSF also urges Mnangagwa to overhaul legislation that oppresses journalists, transform the state-owned media into public service media and open up broadcasting to private sector entrepreneurs and journalists from outside the government’s immediate circle.

Since Mnangagwa, Mugabe’s former right-hand man, seized power nine months ago, press freedom violations have declined but there are still too many cases of violence against journalists and at least four reporters were physically attacked the day after the 31 July general elections.

Those responsible for the violence include members of the security forces, political party activists and sometimes even senior government officials, as RSF noted in June, when a government minister threatened to beat a journalist during a live broadcast from radio SFM’s studio.