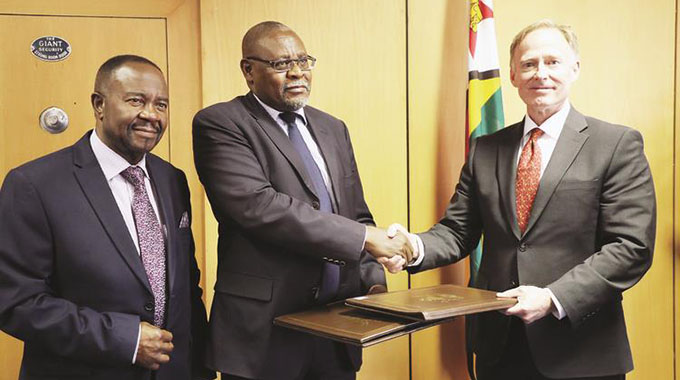 The firm, which is headquartered in New York, will mobilise funding for the projects in partnership with Zimbabwe in terms of the agreement.

Zimbabwe signed the partnership after a due diligence exercise that confirmed the financial capacity of Hondius Capital.

“Zimbabwe stands to benefit not only through the US$1 billion infrastructure development fund, but through downstream benefits such as employment generation, enhanced foreign direct investment, modernisation of the economy through technology and skills transfer and indeed through refurbishing of some of our embassies such as the Zimbabwe House in New York and in Washington.”

Dr Mbizvo said the negotiations started way back with high-level negotiations that involved the Office of the President and Cabinet, Ministry of Finance and Economic Development, IDBZ, Foreign Affairs and International Trade, the Attorney general and OSISC.

Last month, Government sent a delegation to New York for due diligence before the parties agreed to the partnership.

“In pursuit of the finalisation of this partnership, the Government sent a delegation to New York led by the Office of the President and Cabinet, from September 5-7 2018,” said Dr Mbizvo.

“The delegation was pleased with the financial capacity of Hondius Capital Management and its ability to mobilise funding towards the US$1 billion for our various projects and hence recommendation to Government and indeed to the President to join in this noble partnership.”

In an interview, Hondius Capital managing director Mr Jack Heffernan said his company was committed to investing in Zimbabwe.

“I have been in Africa for 12 years working with different countries, but Zimbabwe has the best investment opportunities,” he said. “We will mobilise funds from pension funds, insurance companies and other financial entities to fund the projects in Zimbabwe.”

Dr Thomas Zondo Sakala, CEO of IDBZ, signed on behalf of the institution.

The new dispensation under the stewardship of President Mnangagwa has anchored its economic turnaround strategy on a number of factors, including opening Zimbabwe up for foreign investment and re-engaging the international community.

It has also removed regulations that hindered investment in the country like the indigenisation and economic empowerment law.