Although with the total number of Covid-19 jabs last week falling below 200 000 for the first time since the second week of July, Saturday did see the minor milestones of just over 3,1 million in the vaccination programme with at least one jab, 2,3 million fully vaccinated with both, and 5,4 million jabs given.

With 2 302 367 Zimbabweans fully vaccinated, the country has reached 15,35 percent of its total population, estimated at around 15 million, now with both doses.

At the same time 3 106 102 have had at least one dose, about 20,7 percent of the population, and have thus entered the national vaccination programme.

This means that there are just over 800 000 with one dose waiting for their second.

However, the number coming forward each week for vaccination is dropping. Last week just 190 328 jabs were given, the lowest since the second week of July when the vaccine supply bottlenecks were eliminated and the Ministry of Health and Child Care was able to supply all teams with what they could use.

The peak vaccination rate was reached in the third week of August, when 517 933 jabs were given, and has been falling off steadily since then, largely as the third wave retreats from Zimbabwe and complacency rates rise.

In September 1 135 996 doses were given, the second highest month on record since the vaccination programme started in February, but still only 63 percent of the 1 805 694 doses recorded in August. 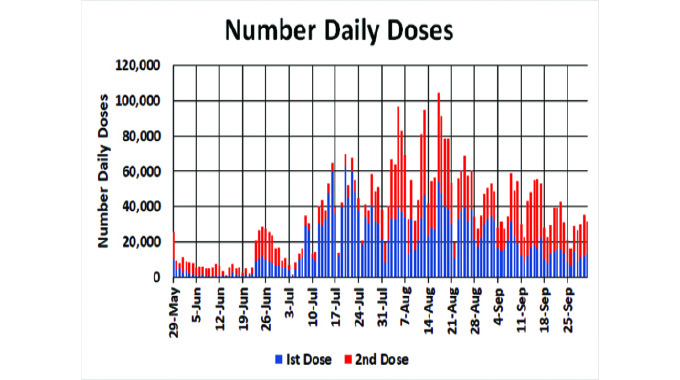 Even now the daily vaccinations are seeing more people coming for their second dose than their first dose, a switch-over seen since September 10 and with the gap widening since.

On the infection side, the figures continue to show the retreat of the third wave. During last week the seven-day rolling average of new daily infections fell from 252 to 227, large a result of the tightening of Covid-19 precautions at schools.

The little microwave seen after the third wave largely retreated, and caused by a score or so of boarding schools being hit, is now also falling after peaking the previous week.

After the seven-day rolling average jumped to six the previous week, largely because of a still unexplained three day jump in daily deaths in the middle of the week, it fell to three last week.

Rolling averages remove the sudden daily blips, and last week we again hit seven on Tuesday and give the general trend. There has been a tendency of sudden mid-week blips, probably due to a batch of post-mortem test results coming on a single day.