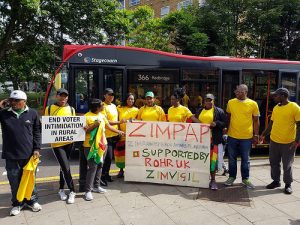 Encouraged by the popular support for change shown by the MDC demonstration in Harare on Tuesday, a group of exuberant Zimbabwe human rights activists arrived at the Vigil after a 15 mile walk to raise funds for the Zimbabwe Peace Actors’ Platform (ZimPAP) which seeks to raise awareness and safeguard voters during next month’s elections.

The walkers – members of the Vigil’s sister organization Restoration of Human Rights (ROHR) wearing yellow tshirts – were embraced by colleagues at the Vigil. They included Margaret Munenge with her nearly 3-year-old son Ethan fast asleep in a buggy. She said he had run much of the way.

A ROHR statement said: ‘Since the announcement of the elections, the military government has reportedly deployed 5000 soldiers in rural areas to instill fear. Traditional leaders are threatening voters with eviction from their homes if they do not surrender their voter registration certificates. Zanu PF campaigns are characterised by vote buying using food, money, farm inputs etc. Voters are being intimidated into feigning illiteracy or blindness so their leaders can vote on their behalf. The list is endless.

‘On the other hand, the heavily militarised Zimbabwe Electoral Commission is refusing to disclose the supplier of the ballot paper, or allow its inspection or audit prior to the vote. This remains a contentious area given past experiences of vote rigging in Zimbabwe facilitated by the Israeli company, Nikuv.’

The Southern African Director of Human Rights Watch, Dewa Mavinga, was also skeptical. He said Zimbabwe risks having another sham election unless President Mnangagwa implements genuine electoral reform. ‘A key step would be whether state media gives equal coverage to all political parties without bias or favour’.

Human Rights Watch says its research in May found security forces involved in the electoral process and said violence and intimidation by Zanu PF contributed to an environment  that was not conducive to free and fair elections (see: https://www.zimbabwesituation.com/news/hrw-zimbabwe-risks-another-sham-poll-without-electoral-reform/).

Two international observer groups have submitted a pre-election report to ZEC also calling for the urgent implementation of outstanding electoral reforms. They said that the military should publicly commit to recognise the winning presidential candidate whatever his political affiliation and called on ZEC to allow all political parties to observe the procurement, printing and storage of ballots (https://www.newsday.co.zw/2018/06/zim-not-ready-for-free-elections-observers/).