On August 01, 2018, my life changed entirely in ways I had not imagined. A part of me died, while a new me was born out of the horrors I filmed right from the frontline, writes Zimbabwean journalist Maynard Manyowa. 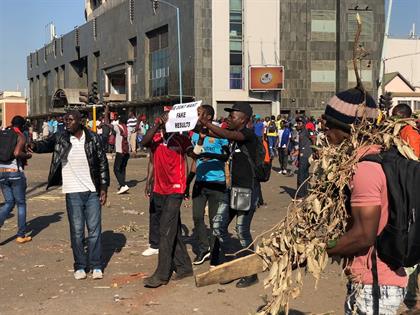 On August 01, 2018, my life changed entirely in ways I had not imagined when I woke up that day. A part of me died, while a new me was born out of the horrors I filmed, right from the frontline.

A group of protesters besieged the Zimbabwe Electoral Commission’s Results Centre at the Rainbow Towers Hotel in the capital, Harare.

They protested peacefully and co-operated with police. It was quite an incredible sight, watching protesters pave way for traffic, taking turns with the police to open and close the gate.

Some 20 minutes later, they left. Some one hour later they returned, with new company. Armed with sticks and stones. This time cars were blocked, police were stoned. A few colleagues and I received a few bricks to the back as we fled.

Police did not retaliate. They considered the violence to be bait. The protesters soon left. Although with promises to return with reinforcements.

My cameras were rolling the entire time. A running video of all the protests can be found on my Facebook TimeLine here.

An hour later, the protesters, now clearly in their thousands returned. They erected burning barricades. They tore down Zanu PF campaign posters, which they burnt. They vandalised traffic lights and launched missiles into the Zanu PF Headquarters, located just outside Rainbow Towers.

Police reacted by launching water cannons. The protesters bricked the muzzle of both trucks, incapacitating them and causing them to flood.

“We will need to get reinforcements. These trucks are no good now”, one officer said to me.

At this point the protesters had branched out into three different groups. Launching a cow horn formation. Police tried to move into the centre. To protect the ZEC results centre, Zanu PF HQ and ZEC’s Head office.

At this point, I made a decision, which I reflect on till today. I sent my candidate reporter away, and went straight into the epic centre, right in the middle of outraged protesters.

They had surrounded the police. They had the upper hand and could sense it. Stones were launched at the human barricade erected by police outside the ZEC Headquarters.

“We maybe minutes away from an Arab Spring here”, a colleague, uttered.

In the horizon, we could see smoke in all four corners of the city. Harare was burning, and tipping point was near.

I approached one of the police vans and tried to get an audience with the man who seemed in charge.

He brushed me off but took to his radio.

“We are overwhelmed. We need assistance.” He said.

Minutes later, I spotted a lone figure, in military camouflage.

“It looks like the army has been deployed.”, I can be heard saying in one of my videos.

Seconds later I saw a military truck, and about a dozen soldiers holding hand whips.

“Yes, the army has been deployed.”

As the army descended, and people fled, stones and bricks flew in all directions. I positioned myself, with a colleague, just next to the police human barricade.

As the soldiers chased protesters, and stones flew in all directions. There was a loud bang. The soldiers just in front of me crouched briefly, then drew their guns, and fired in the air.

“Are those gun shots.” I asked. 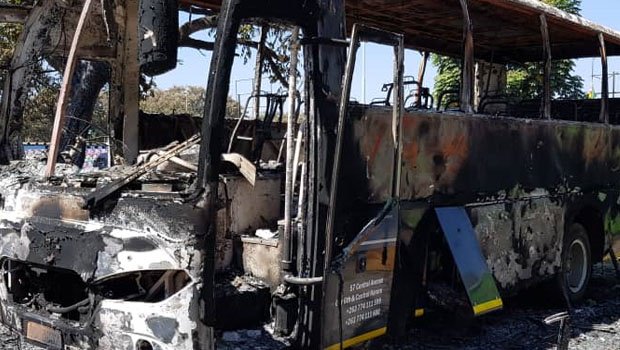 Someone once told me that journalists are born. They are not trained. In that single moment, I left the barricade and began moving behind the soldiers as they advanced deep into the city centre.

I kept filming. I kept commenting.

By this time, my city was a war zone. Gun shots. Bricks. Stones. Running battles. And, believe it or not, military helicopters flying low.

As we turned a corner, I saw a man, wearing a black t-shirt and black pants take two steps, launch into the air and drop like a stone. I knew something had happened. I ran towards him.

When I got there, people said, he is dead.

He was gasping for air. One man lifted his shirt. I saw the single gunshot wound. On his chest. His eyes rolled.

I could tell he had been shot. I didn’t know who shot him. There were no soldiers present when I watched him fall and die.

I kept my cameras firmly on him.

“Can you help him” one said.

But there was nothing I could do. I felt weak. I stood there with a fellow journalist, from South Africa.

The man died as I filmed.

Three minutes later, soldiers emerged from another corner. We waved at them. Pointing to the man who was on the ground.

They changed their direction and came towards us. But as they did, one of them pointed at me and said, “you with the phone come here”.

His colleague cocked his weapon, shot in the air. 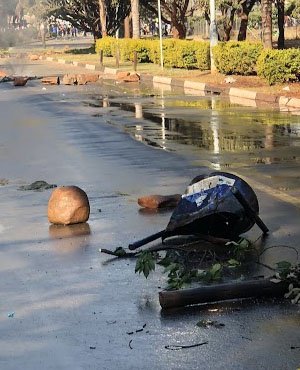 The South African colleague grabbed my arm and said, “we need to leave now”.

Everything became slow. I was dazed. As I battled to get a grip of myself, I turned left, and saw a weapon pointed at me, from a distance, as a group of soldiers advanced.

I thought they were going to shoot.

My colleague pulled. I got a grip of myself and we began to run. As we started running, we could hear the soldiers shout “stop stop”.

At this point, any gun shots we heard, we assumed we were being shot at.

We ran, cowered behind a concrete bin. I was out of breadth. I was afraid. I had watched a man die and I thought I was going to die.

“We can’t stay here. We need to get up and run” I said to my colleague. We ran in zig zag lines.

We ducked. We dived. We saw army trucks in different directions. We ran in a maze. But we made it out of the epic centre.

As we walked back towards the hotel. I was sweating. I was in tears. I was distressed.

My family, who were watching everything on TV caught a glimpse of me on eNCA. Thulasizwe Simelane was speaking and I was walking in the background, breathing heavily. 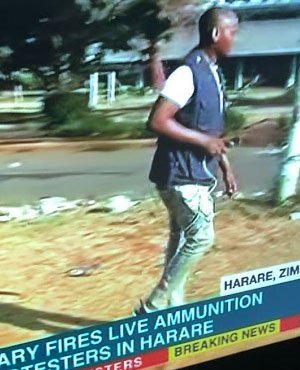 I got back to the hotel. I called my wife. I broke down. I went up to my room. I downed a bottle of whiskey and passed out.

In the immediate aftermath of the violence, I became a target of attacks on social media. I was demonised for writing that I had taken bricks to the back from protesters. I was lynched for stating that I had filmed protesters consuming drugs and alcohol.

After the election results were announced, the impact of what I went through that day became real. The face of the man who died on my live video became an ever-present image. The paralysing fear I felt when I thought I was going to die would come back every other hour.

I took to alcohol. I slipped into depression. I suffered from panic attacks, anxiety attacks and severe paralysing fear.

I would lock myself in my room for hours on an end. Sometimes even a day or two.

I was bouncing off the walls. My wife struggled just to keep me from sinking into the abyss and drowning.

I cannot even begin to explain the impact that all this had on my three young children. On my family. On my relationships.

On the 11th of November, I am meant to testify during the commission of inquiry. Initially, I had no interest in doing so. The horrors of that day are an experience I wish to forget.

I learnt that day, that politicians are willing to leverage human life and score cheap political points. I watched in disbelief, in the aftermath, as some sections applauded the ‘brave people’ who took to the streets.

Yet I had been in the streets. I saw, and filmed people being pushed to ‘start something’. I saw innocent bystanders lose their lives. I saw innocent people caught up in the crossfire.

This is the first time I have written since the violence. I saw a lot that day.

I do not feel sorry for myself though. I have always had a passion for journalism, despite its dangers.

It comes with the territory. But am human after all. And journalism is a thankless job. At the end of the day, I returned home a broken man, and my wife has had the burden of putting back the pieces of a journalist who used to be hall.

Maybe someday I will tell the entire story. Maybe I will not.