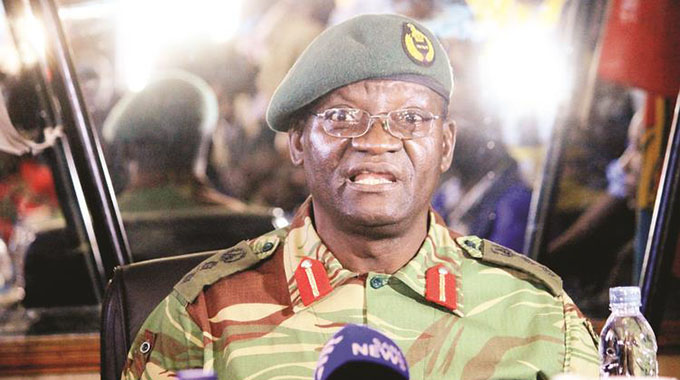 Zimbabwe Defence Forces spokesperson Colonel Overson Mugwisi addresses journalists at a Press conference on the role of the defence forces in the forthcoming harmonised elections in Harare yesterday. — Picture by Munyaradzi Chamalimba

Felex Share Senior Reporter
The Zimbabwe Defence Forces (ZDF) says it will respect the outcome of the July 30 harmonised elections as its conduct is guided by the Constitution. ZDF spokesperson Colonel Overson Mugwisi said ZDF members, like any other citizen, were free to vote for a political party of their choice.

He made the remarks while addressing journalists on the role of ZDF during elections.
“We abide by the Constitution,” he said.

He added: “Furthermore, it should be noted that members of the ZDF, like any other citizens, are not barred from exercising their right to vote for any political party of their choice in national elections.

“According to Chapter 4, Part 2, Section 67 of the Constitution of Zimbabwe, members of the ZDF, like other citizens, have democratic rights to participate in national elections.

“Chapter 6, Part 4, Section 125 of the Constitution does not exempt any category of citizens, including retired ZDF members, from participating in political activities and holding such offices.”

He said ZDF had no direct role in the upcoming polls, but remained ready to support the police in maintaining law and order.
“We also remain ready to assist the Zimbabwe Electoral Commission (ZEC) with transport where necessary,” Col Mugwisi said.

“Beyond that, the ZDF remains ready to defend our country’s territorial integrity and interests. If some serving members are participating in the ongoing political campaigns, they will be doing so illegally and not as a result of an instruction from their commanders.

“Those with information on such misconduct should provide us with full details of such individuals to enable appropriate disciplinary action to be taken against them. They can also report the suspicious characters to the nearest police station.”
He said ZDF members at rallies attended by VIPs should not be misconstrued to be participating in political activities “as these are some of our official duties”.

He said members on military commitments away from where they registered would vote using the postal ballot.
“Members who will be afforded the postal ballot include troops on training commitments at the all Arms Battle School in Nyanga, regular officer cadets training at Zimbabwe Military Academy in Gweru, members proceeding to the Russian military games and some deployed on border control operations.

“In this regard, we are disturbed by false reports already circulating on social media alleging that the ZDF is going to be used by Zanu-PF to rig the elections through postal ballot. These malicious reports should be dismissed with the contempt they deserve.”

Col Mugwisi urged the media to report responsibly adding that his office was available to provide accurate information.
He said contrary to reports by sections of the media, the military had not deployed in rural areas.
Turning to the recent bomb attack in Bulawayo, Col Mugwisi said security arrangements would be reviewed.

“Normally when such incidents take place, that calls for a review of the security arrangements with a view to improving them,” he said.

“That exactly is going to be done. Investigations are still continuing led by the Zimbabwe Republic Police. The ZRP and presidential spokesperson (Mr George Charamba) have been providing updates timeously and I believe as and when they get additional information they will come back to the public and advise.”