In light of the continued plunder of wetlands in the capital, and the imperative need to protect the water sources from further destruction, the Harare Wetlands Trust (HWT) on Wednesday, November 27, 2019 engaged the Ministry of Environment, Climate Change, Tourism and International Trade to put forward submissions on wetlands protection. 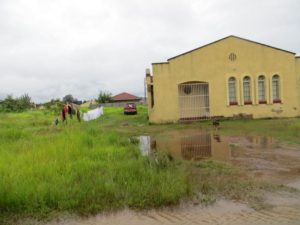 A house built in the midst of a wetland

Senior officials from the Ministry as well as a representative from the Zimbabwe Lawyers for Human Rights (ZLHR) also attended the meeting.

Below are the HWT’s submissions during the meeting with the Minister of Environment;

The government of Zimbabwe ought to take a leaf from countries such as Kenya and Uganda that have implemented the Ramsar Convention recommendations on the restoration of wetlands. There is a need to restore Harare wetlands as nature reserves

In line with the Environmental Management Act (Section 113) wetlands must be declared as ecologically sensitive areas.

Of late the Environmental Management Agency has been issuing a lot of Environmental Impact Assessment certificates that have paved the way for construction on wetlands yet almost all the open spaces left in Harare are wetland areas.

There is a serious violation of the law that is leading to the destruction of wetlands in Harare. Some companies are proceeding with construction projects in the absence of Environmental Impact Assessment Certificates and Development Permits

The City of Harare must be compelled to consult with stakeholders before proceeding to issue development permits. There is also a need to create a One-Stop-Shop for the issuance of Environmental Impact Assessment certificates to allow for input or objections from concerned stakeholders

IN RESPONSE to the submissions by HWT, the Minister of Environment, Honorable Nqobizitha Ndlovu said that in light of the dire water situation in Harare, construction on wetlands ‘is something that certainly cannot be allowed to continue’.

“I do not think it is sustainable to continue building on wetlands. The President has also been very clear on the need to protect our wetlands and we also need to enforce the legislation that we have to make sure we protect our wetlands. We will make our best efforts to bring critical stakeholders to the table so that we come up with an agreed position on wetlands protection,” said Minister Ndlovu.

It was proposed at the meeting that there is a need for engagement between stakeholders that include Ministries such as Local Government, Housing, Environment, Justice as well as government departments, the City of Harare and Environmental Groups to map the best way forward with regards to wetlands protection.

Minister. Ndlovu assured the HWT delegation tat this will be achieved in the first quarter of 2020.

He highlighted that legislative reform requires input from different stakeholders hence the need for an all stakeholders approach to the issue.