When a dead Zimbabwe president attracts more people than a current

Source: When a dead Zimbabwe president attracts more people than a current – The Zimbabwean 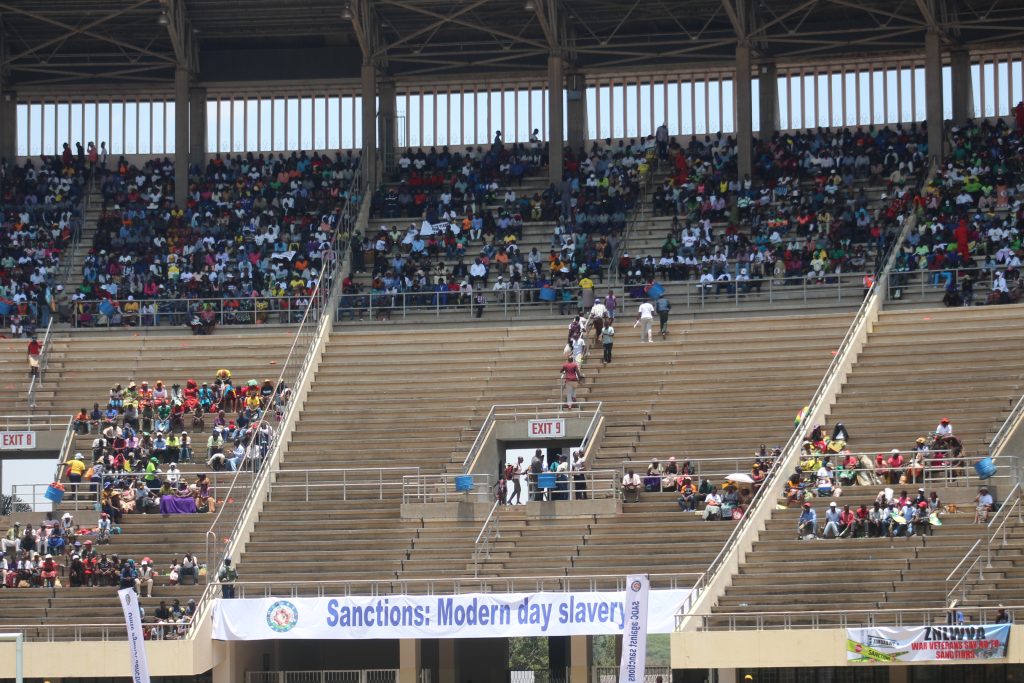 The past two months in Zimbabwe have been characterised by very notable events – some of which stood out more than others – but, what I found outstanding was the general public’s reaction to the death of ousted president Robert Gabriel Mugabe on 6 September 2019, and the anti-sanctions march called for by his predecessor Emmerson Dambudzo Mnangagwa on 25 October 2019.

These two events brought out something in Zimbabwean politics that we can not afford to ignore – especially, in the context of the prevailing economic and political challenges the country is facing.

Mugabe’s death was generally greeted with mixed reactions by a heavily polarised nation – unsurprising, considering the nature of his rule, or rather misrule.

However, what I found most interesting was the undeniable fact that far much more people attended his funeral and body viewing than those who attended his successor’s ‘anti-sanctions march’ – in fact, a dead Mugabe managed to fill a huge stadium (over a period of two consecutive days), in stake contrast to his successor who barely managed to mobilise only a tenth of the 60,000 seater giant National Sports Stadium.

Mugabe was undoubtedly a brutal leader, whose iron-fisted rule over Zimbabwe was characterised by gross human rights abuses, electoral fraud, gross corruption, and warped economic policies, which resulted in the deaths of tens of thousands of innocent people, and the fleeing of millions more into the diaspora – prompting Western countries imposing targeted sanctions against him and all his cronies in both government and the ruling ZANU PF party in 2001 and 2002.

Similarly, the man who took over from him after a military coup in November 2017 – his long-term protégé Mnangagwa – has failed to shake off his former mentor’s ruthless ruling habits, and economic mismanagement – thereby, perpetuating the seemingly unending suffering of the people of Zimbabwe.

Both of these leaders (for lack of a more appropriate term, as theirs can never be regarded as ‘leadership’) – in the face of growing dissatisfaction amongst the populace – have always resorted to blaming targeted sanctions imposed on the country’s top officials and entities associated with them, for the economic mess that has witnessed massive company closures, soaring unemployment of over 90%, shortages of both foreign and domestic currencies, fuel, electricity, water, essential medication, and anything else that makes life worth living – coupled by ever-increasing prices of basic commodities.

In spite of this ‘economic sanctions responsible for all our problems’ myth, the people of Zimbabwe have never allowed themselves to be deceived, as evidenced by their constant and consistent rejection of the ruling ZANU PF party – most notably its loss of support to the opposition Movement for Democratic Change  (MDC) in concurrent elections since 2000, culminating in the defeat of Mugabe to Morgan Richard Tsvangirai in 2008. A result that Mugabe unsuccessfully sought to rig, but ended up unleashing a reign of terror unmatched since his 1980s genocidal Ndebele crackdown in the Midlands and Matebeleland provinces, leading to the massacre of over 20,000 people.

The 2008 brutal murder of hundreds of opposition supporters by Mugabe, forced the regional Southern Africa Development Community (SADC) – which has always blindly sided with Zimbabwe’s ruling elite, no matter its hard-hearted heinous rulership – into forming a Government of National Unity (GNU) with Tsvangirai – a period of relative economic stability and growth, despite Western targeted sanctions being very much still in place.

Be it as it may, after ousting Mugabe in 2017, his successor promised tremendous economic growth – glossed over with mantras such as, ‘Zimbabwe is open for business’, and ‘an upper middle-income economy by 2030’ – as well as the opening up of democratic space for all Zimbabweans, no matter their political persuasions.

In fact, Mnangagwa is on record for urging Zimbabweans ‘not to moan over sanctions’, as he appeared overly confident that he could have the country on the road to prosperity in no time at all.

However, not too long after all these promises were made to the people of Zimbabwe, did the economy – which had been relatively stable since 2009 – take a sudden nosedive, ushering in the current unbearable existence.

Similarly, the promised democratic space was never to be, as only a few days after the 30 July 2018 elections, at least six people were shot dead by security forces during post-election rioting in the capital Harare – something further confirmed by a government-appointed commission of inquiry led by former South African president Kgalema Mothlante, resulting in the commander of the accused security forces being added to the targeted sanctions list.

Barely six months later, during another round of rioting in Harare – this time against fuel price increases, at the genesis of what was to be the country’s worst economic freefall in a decade – scores more people were gunned down, and numerous persecuted by suspected security personnel – further raising the ire of both the international and local community.

The period after this was characterised by a resurgence of a wave of abductions of both opposition and labour activists by people who have never been identified.

In the wake of all these disturbing happenings, the Zimbabwe government has sought to shift all the blame for the suffering people’s increased disgruntled over the economic meltdown on targeted sanctions imposed by the West.

However, if such an approach never worked on the people in 2008, why did the current government believe it would work this time around?

Only they can answer that.

Nonetheless, what was clear was that the people did not buy this yarn 10 years ago, and they were not about to do so this time around either – as glaringly witnessed by the dismal attendance to the government’s so-called ‘anti-sanctions march’ on 25 October 2019 at the National Sports Stadium in Harare.

The fact that, in spite of the day being declared a national public holiday, government pouring in $4 million of money that we do not have as a nation, a concerted propaganda onslaught in state media, a hundred free buses and a train to ferry people to the march venue from all corners of the country, reports of rural people being threatened to attend, and free takeaways for each attendee – only an approximate 7,000 people gathered into the giant 60,000 seater stadium.

If we were to make a comparison, when Mugabe passed away a month earlier, notwithstanding his loathed record, far much more people turned up to bid him farewell at another huge Harare stadium – in fact, the venue was filled to be brim on two consecutive days, without provision of any free transport, neither was his death declared a public holiday, nor free food offered or threats issued.

Thus, why would a despised dead leader attract more to bid him farewell, than a current president for his ‘anti-sanctions march’?

I do not think that anyone can ever proffer a satisfactory answer – maybe, because when he was ousted the economy had been relatively stable for a decade despite targeted sanctions being in place, and those who had supported and celebrated his overthrowing were now openly expressing regret – but, one thing is clear – people are fed up with the present leadership’s failure to urgently address their concerns, and are sick and tired of the endless excuses – hiding behind sanctions, saboteurs, or other unseen ‘third forces’.

The people expect leadership that delivers, without any excuses – no matter what challenges are faced along the way. There is nothing that strips any confidence away from a leader quicker than one who is always full of excuses for his or her failures.

Instead of hearing the ever-frustrating daily talk of ‘sanctions this and sanctions that’, we the people of Zimbabwe want to see the genuine restoration and respect of human rights, fearless and unbiased fight against corruption, and the implementation of sound economic policies. Nothing less!

The people have had enough, and their boycott of the ‘anti-sanctions march’ was their loudest demonstration against the government ever – rather choosing to travel to see a dead president than a living one!