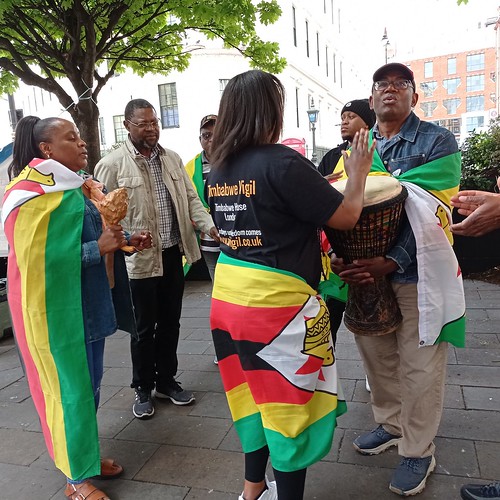 President Mnangagwa’s vitriolic spokesman George Charamba has demanded that Britain stop ‘poking its nose’ into Zimbabwe’s affairs. Complaining about a recent debate in the House of Lords on the situation in Zimbabwe, Charamba said Britain was sponsoring opposition to the Private and Voluntary Organisations Bill which seeks to regulate civil society and non-governmental organisations, which he accused of pushing for regime change.

Charamba said Zanu PF was open for talks with the Citizens’ Coalition for Change leader Nelson Chamisa – but that Chamisa must first distance himself from British politicians. The CCC’s deputy spokesperson Gift Ostallos Siziba said the party was not interested in talks with Zanu PF but wanted a national discourse including the churches (see: https://www.herald.co.zw/britain-should-mind-its-own-business/ and https://www.newsday.co.zw/2022/05/zanu-pf-sets-conditions-for-chamisa-talks/).

The Lords’ debate was organised by Jonathan Oates who knows Zimbabwe well and it was also addressed by Kate Hoey, his predecessor as Chair of the All-Party Parliamentary Group on Zimbabwe. Both have visited the Vigil. To hear the debate: https://parliamentlive.tv/event/index/ce672e1c-52d8-479d-a0bf-88fe92da3d6e?in=16:36:26.

We found the debate expressed a deep concern for the people of Zimbabwe – something lacking from Mnangagwa’s regime fronted by Charamba and his paranoid fantasies. In his desperation to discredit Britain, Charamba said UK parliamentarians would be better employed dealing with what he described as ‘soaring’ inflation. The UK rate of inflation has indeed reached 7% – somewhat short of the 200+% inflation rate in Zimbabwe.

Aljazeera says Zimbabwe is once again in the grip of a severe economic crisis characterised by a massive shortage of foreign controversy, unemployment at more that 90%, low production and hyper-inflation that has reduced purchasing power. In a report by Chris Muronzi it says: ‘Barely three years after the reintroduction of the Zimbabwe dollar, its value has plunged dramatically. From trading at around 210 Zimbabwean dollars to $1 at the beginning of March, it is now trading at 400 to $1 and black market dealers are selling it for $450.’ (See: https://www.aljazeera.com/economy/2022/5/5/dollar-oclock-should-zimbabwe-axe-its-faltering-currency-again.)

President Mnangagwa has blamed the economic crisis on ‘enemies’ who he says are seeking to dislodge him from power. In an extraordinary speech at a Zanu PF Youth League conference in Harare, he said his enemies were working closely with some business people to create instability. He said young people should create their own jobs instead of aspiring to be teachers or nurses. ‘The days for you to line up and seek jobs are fading . . . I thus expect to see the emergence of a crop of young versatile entrepreneurs who will help leapfrog our economic growth and emerge as the country’s millionaires.’ (See: https://www.newzimbabwe.com/mnangagwa-claims-he-is-being-sabotaged-by-his-enemies-who-want-to-topple-him/.)