Why is Zanu PF imploding now? 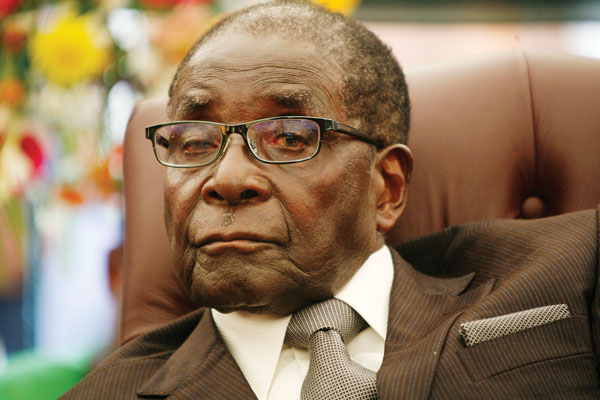 Mugabe threatened to deal with the former freedom fighters the same way he did in the 1980’s when he unleashed a North Korean trained military unit to Matabeleland and Midlands to fight against ‘dissidents’ against his rule. An estimated 20 000 civilians were left dead.

The document said there was discontent in the ruling party over Mugabe’s reluctance to put Mnangagwa a foot-head to succeed him. The document laid down strategies on how the war veterans would target their perceived enemies, namely the G40.

It was believed to have been authored by Zimbabwe National Liberation War Veterans Association (ZNLWVA), who had selected Mnangagwa to succeed Mugabe as the leader of Zanu PF.

As they say, the rest is history as Mugabe was later to be toppled in November 2017 and succeeded by Mnangagwa with war veterans and the army having played a leading role in his ouster.

The same script is playing out again as the ex-combatants are in the media spotlight in the bitter fight for control of the soul of the party between Mnangagwa and his deputy Constantino Chiwenga.

Ex-combatants have staged protests against the government over pension earnings related to their welfare. In September 9 of them were arrested over the protests, but were reportedly clandestinely released allegedly under Chiwenga’s orders.

Chiwenga was said to have backed the war veterans’ protest in the fight for control of the party and government. War veterans have played key roles in Zanu PF politics.

And now the war veterans holding senior positions in the ZNLWVA who backed the protests and are suspected to be aligned to Chiwenga are now targeted for ouster by freedom fighters aligned to Mnangagwa.

Douglas Mahiya, the secretary for war veterans in Zanu PF, is the first casualty as a faction linked to Mnangagwa guns for Chiwenga and his loyalists in key positions.

At the same time, Mnangagwa is also having sleepless nights as there is a court case by a Zanu PF youth league member Sybeth Musengezi who is challenging the way the President assumed the Zanu PF leadership after Mugabe’s removal.

The Musengezi challenge has brought to the fore the unresolved Zanu PF leadership question post the 2017 coup but analyst Mlungusi Moyo argued otherwise.

“This is just one youth (Musengezi), who used to be in the party. He was loyal to Mujuru (former VP Joice) not to the party but he has a strong lack of understanding of the party constitution,” Moyo said.

“Be as it may I don’t there is, or there was an unresolved leadership issue in 2017 because there is what I can call leadership renewal. What happened in 2017 was that people were fed up with what the party was delivering.  And then there was that transition.

“To say there is an issue of an unresolved leadership is incorrect because the party constitutionally called for that Congress.”

Musengezi argued in court papers that a Central Committee meeting held on November 19 that resolved to remove Mugabe was illegal, and unconstitutional.

Mugabe was forced to resign after the central committee meeting as party president. Mugabe also resigned as Zimbabwe president after he was threatened with impeachment.

Moyo added: “If ever there was an issue of unresolved leadership positions it would have been dealt with constitutionally, within that Congress (December 2017) because the Congress is the ultimate decision making body. As we went through that due process, there is no worry, crisis or any matter arising from the status quo in leadership.”

But Blessing Vava, the Crisis in Coalition director said Mnangagwa suffers a legitimacy crisis —first with the 2017 coup and the subsequent disputed 2018 elections — resulting in the growing fight over the party leadership question.

“His endorsement by the Zanu PF Central Committee has been challenged as unconstitutional so he faces a legitimacy crisis at a national and party level,” Vava said.

“The 2018 elections which he claims to have won largely failed the credibility test and the shooting of 6 civilians who were protesting against electoral theft in August 2018 also shows that President Mnangagwa ascended to power largely through the bullet than the ballot. So one cannot claim legitimacy after a violent and discredited election.”

Analyst Rashweat  Mukundu said the unresolved leadership question in ripping Zanu PF apart arises from the fact that the coup government never had a cohesive national agenda or any party reform agenda.

“It appears to me that they were many things that were agreed in the moments of euphoria of removing Mugabe but those agreements were and are not being honoured, and hence the disgruntlements, complaints, and divisions within the party and of course what then happens in that party – because of its close linkages with the military — it has a serious implications on the safety of citizens of this country,” Mukundu. He argued that fuelling the fierce fights in Zanu PF was that the protagonists were only “interested in power retention at all costs and wealth accumulation that come with holding that power.”

Bulawayo-based analyst Effie Ncube weighed in saying Zanu PF has always battled leadership squabbles since it was formed in 1963.

“It went through a very tumultuous period in the 1970s with the Mgagago declaration, removal of Sithole and Mugabe coming in. Even in the 1980s there were contestations for power within that led to the ejection of their then secretary-general Edgar Tekere and the contestations continued, but with the Unity Accord Mugabe consolidated his power and there was very little challenge,” Ncube argued.

“As such, the 2017 coup was not about democratisation or the fight for human rights. It was the fight for control of Zanu PF — the looting machinery. There is no way they can resolve the leadership question without democratising the party.

“The only way to resolve squabbles within political parties is to democratise and allow democracy to determine who leads. But the problem within Zanu PF is that the processes are so seriously manipulated. Mnangagwa can’t resolve it, Mugabe failed. Zanu PF is not structured for democratic governance both within and outside. It was structured for dictatorship, for corruption, for abuse of human rights.”